James Corden and Victoria Beckham on an episode of Carpool Karaoke.
CBS
By Kate Samuelson

Victoria Beckham sometimes gets flack for her “icy” facial expressions, but she’s not as serious as she looks if this brilliant new Late Late Show video is anything to go by.

The former Spice Girl and show host James Corden spoofed the 1987 romantic comedy Mannequin, starring Pretty In Pink’s Andrew McCarthy and Sex and the City‘s Kim Cattrall. In a satirical trailer for their modern version of the film, Beckham plays a plastic shop model who comes to life when Corden is around. “The world couldn’t understand their love… like really couldn’t understand their love. No seriously, they didn’t get it,” the voiceover deadpans.

The fake trailer also acts as a further promotion for Corden and Beckham’s highly anticipated episode of Carpool Karaoke. At one point, the two are shown dancing to the Spice Girls’ chart-topper, “Spice Up Your Life,” while a bemused driver looks on. From the driver’s perspective, it looks like Corden is bizarrely singing his heart out to a mannequin.

Earlier this week, Beckham shared some behind-the-scenes snaps of herself getting some beauty touch-ups for Carpool Karaoke, along with the caption “top secret filming!” She later shared a clip of herself in the car with Corden himself. 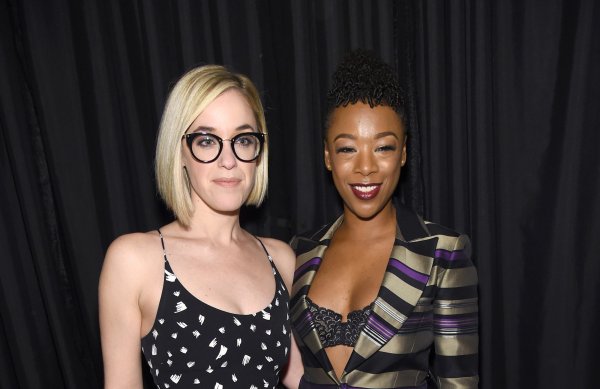 Samira Wiley and Lauren Morelli Are Having a Magical Honeymoon at Disneyland
Next Up: Editor's Pick