The 16 Bodies in the Mosul Alleyway

Captain Seif Burhan of Iraq’s Federal Police fifth division special forces covers his face near the massacre site in the al-Aqeedat neighborhood of western Mosul on March 30. Contradictory accounts emerged as to how the 16 were killed.
Emanuele Satolli for TIME
By Jared Malsin

They are sprawled in the alleyway, the dead bodies. Women, children, two old men with white beards, they are 16 in all, their faces bloated with blood now, at least a week after they were killed as they attempted to flee the fighting between Iraqi troops and ISIS in the city of Mosul.

The scene in the city’s al-Aqeedat neighborhood stands as grim testimony to the soaring civilian death toll here, as Iraq’s armed forces continue to battle through the section of the city west of the Tigris River. Reports of civilian casualties surged in March as a result of shelling, airstrikes by the U.S.-led coalition and the use of human shields by Islamic State gunmen.

The dead in this alleyway were killed in panicked flight. A woman lies next to the body of her small child. Another is alongside a sack of rice, a sign of the months of siege endured by people trapped in this ISIS-held section of Mosul. A woman in pink pants lies with legs splayed. A young boy in a red jacket lies with his arm folded across his body. Shoes and clothes are strewn on the ground. One body is covered with a blanket, placed by a resident who identified him as his father.

It was impossible to immediately confirm the cause of the civilians’ deaths but elements of the scene provided clues. At least 12 bullet casings laid on the ground. A sizable round hole in the wall of the house indicated the presence of a mortar or other artillery. Scattershot pockmarks appear on the wall, suggesting either shrapnel or bullets. One dead man’s skull was crushed. Others had deep gashes on their legs. Blood spattered the wall.

Naim Obeid, a soldier in Iraq’s Federal Police who directed TIME to the bodies, speculated that they had been shot by ISIS. “In our experience, if it’s a mine, you’ll see body parts everywhere. But as you can see there are bullets everywhere, like someone was barraging them with a Kalashnikov or something. And you can see there are a lot of holes in the wall,” he said. “ISIS wanted to make an example of them, for others who try to flee,” he added.

An officer deployed at the same location gave a different account of what had happened. Captain Seif Burhan of the Federal Police fifth division special forces said he witnessed the group set off a booby trap. At the time, the house was located within ISIS-controlled territory. As Iraqi government forces approached, the family inside decided to flee, he said.

Burhan said he watched from a nearby building as the group opened the door of a concrete house where they had been sheltering. According to the captain, they filed out of the house, down some concrete steps and into the adjacent alleyway. Then, he said, one member of the group stepped on a trigger, sparking a series of explosives lining the alley. “There’s a straight line and when you move within this perimeter, the trigger is at the end. When you put your foot on the trigger it’s not going to explode on one person, it’s going to explode on everyone,” says Burhan, speaking on a street steps from where the bodies lay.

The contradictions in the two accounts were indicative of the confusion on the ground in Mosul, where civilians are dying in greater and greater numbers as fighting continues. AS U.S.-backed Iraqi forces attempt to liberate the western section of the city, residents and military officials say ISIS is detaining civilians and using them as human shields on a mass scale.

But the U.S.-led coalition is also intensifying its use of airstrikes in the campaign against ISIS, leading to a surge in claims of civilian casualties, including an explosion on March 17 in which as many as 200 people died allegedly as a result of an American air raid. The U.S. Central Command has admitted delegating battlefield commanders to approve strikes, but the military has denied a shift in the rules of engagement reported by some Iraqi officials.

There’s little doubt that ISIS has engaged in mass killings of civilians across its territory in Iraq and Syria, however. In one recent case, authorities discovered a mass grave in a sinkhole outside Mosul. In interviews, residents of the newly-freed sections of Mosul say ISIS executed people for infractions as small as using a cell phone, banned under the Islamic State. Iraqi forces, meanwhile, have been documented using crude and inaccurate weapons in the intense urban battle against ISIS in western Mosul, including improvised rockets that could potentially kill indiscriminately.

However these people died, they are only among the most recent victims of ISIS’s almost three-year occupation of Iraq’s second city. As soldiers press on into the densely populated passageways of occupied Mosul, the human toll is likely to rise yet further. 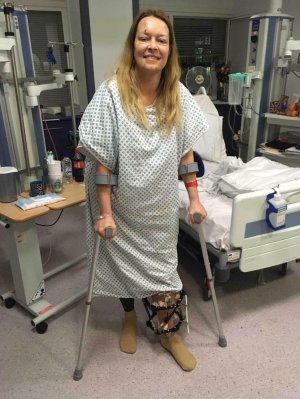 American Injured During London Attack Says She’s ‘Getting Stronger Every Day’
Next Up: Editor's Pick