Why Laziness May Be Contagious

How hard people work to achieve a goal has a lot to do with their personality. But according to a new study, it also has to do with the personalities of people around them. The behavior of other people can influence traits like laziness, impatience and prudence—even when a person is unaware that it’s happening.

The findings are notable, says lead author Jean Daunizeau, a researcher at the French National Institute of Health and Medical Research (INSERM), because these three traits are typically thought to be unique among individuals. “They drive most of our daily decisions, which are made of trade-offs between the prospect of reward, and costs such as risk, effort and delay,” Daunizeau said in an email. What’s surprising here is that these seemingly unique behaviors “are so volatile and prone to others’ influence.”

In the study, published in the journal PLOS Computational Biology, Daunizeau and his colleagues asked 56 people to make a series of decisions involving risks, delays or effort.

They asked the people if they would rather enter a lottery with a 90% chance of winning a small payoff, or one with a 10% chance of winning a large payoff; if they’d prefer a small reward in three days or a larger reward in several months; and if they’d choose to do a physically demanding task with a big payoff or an easier one with a smaller payoff.

In the second round of decision-making, people’s attitudes tended to become more similar to those of the fictional participants. Many of them also assumed (without any evidence) that the attitudes of others would closely resemble their own.

The participants were mostly unaware of these biases, say the authors. They write that these subconscious attitude shifts may be among the many factors that contribute to the natural alignment of collective human behaviors—a phenomenon sometimes known as herd mentality.

It’s not yet clear how this type of attitude contagion compares to other forms of feedback or peer pressure, or how behaviors might change if people become aware of them. “For example, if your lazy boss rewards you for having invested more effort in your work, will you become more or less lazy?” Daunizeau says. “What if someone makes you realize that you imitate the attitude of your lazy boss?”

More research is needed, and the findings aren’t meant to discourage spending time with certain types of people. But Daunizeau says it probably won’t hurt for people to surround themselves with others whose dispositions and work ethics they admire—and to be more aware of less-desirable traits of friends and family, which could potentially rub off on them. 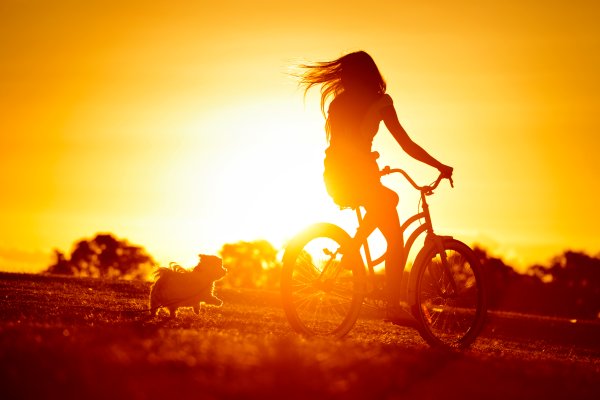 A 21-Day Guide to Your Most Positive Self Ever
Next Up: Editor's Pick