Britain Keeps Calm and Carries on After Parliament Attack

Three days after Khalid Masood mounted the March 22 attack in London, Muslim community organizers in the British city of Birmingham held a rally to show that extremists do not represent their faith. The country’s right-wing newspapers had latched on to the fact Masood had lived most recently in the city, where 1 in 5 is a Muslim, describing it as a “hotbed of jihadism.” The people of Birmingham felt compelled to peacefully show that wasn’t the case.

The low-key march was in keeping with the characteristic stoicism displayed by most Britons after the “lone wolf” rampage in the shadow of Big Ben killed four and injured around 50 in the span of 82 seconds. Lawmakers in Parliament resumed their duties the following day, as did the country’s office workers, pub landlords and hotel managers. “As I speak, millions will be boarding trains and airplanes to travel to London, and to see for themselves the greatest city on earth,” Prime Minister Theresa May told Parliament on March 23, thanking Britons for the “millions of acts of normality” that denied terrorists “their victory.”

The U.K.’s robust counterterrorism agencies have long prepared for such an attack. The Houses of Parliament went into rapid lockdown after shots rang out in Westminster, and the first-response team of counterterrorism officers and ambulance services arrived on the scene within minutes. “Spending on security services [in the U.K.] is considerably higher than their European counterparts,” says Jennifer Cole, a research fellow at defense think tank Royal United Services Institute. Officials also have nearly five decades’ worth of experience dealing with internal terrorism, dating to the Irish Republican Army campaign against British targets.

Few lawmakers called for new security protocols or powers of arrest, in contrast to the emergency legislation in France following the (far more deadly) 2015 Paris attacks. Nonetheless, police will be reviewing Parliament’s security. The government is also expected to refresh its controversial Prevent antiradicalization scheme, which has become toxic among the country’s Muslim communities, who believe it encourages monitoring and informing on neighbors rather than tackling the root causes.

In Birmingham, those communities took to the streets to disavow the attack and its perpetrator, who had moved to the city less than a year ago. Police have made at least nine raids and eight arrests in the city, but concluded that Masood, born Adrian Elms to a Christian mother, had no known links with ISIS–which opportunistically claimed the attack–or al-Qaeda. All signs suggest he executed the act of violence alone, something that Muslims at the Birmingham event sought to emphasize. “We feel unsafe about terrorism just like everybody else,” Naveed Ahmed, 26, a humanitarian aid officer, told TIME on the sidelines of the march. “How can you hold a whole community responsible for the actions of one individual?” 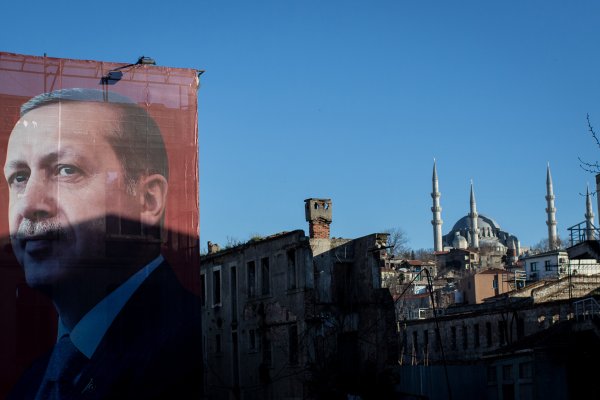 Turkey's Erdogan Threatens a Breakup With the E.U.
Next Up: Editor's Pick