What’s funny, and what’s just pandering? The affable Tonight Show host Jimmy Fallon toes this line more carefully than most. He’s trying to update an old genre for a new audience, one that’s less enamored of watching prolonged interviews with celebrities just before nodding off; the new viewership chooses instead to sneak bite-sized segments online at work the next day.

Sometimes Fallon strikes gold with these sketches. He recently mimicked Bruce Springsteen alongside the man himself, while roasting Gov. Chris Christie in the process. And he and Lindsay Lohan threw water on one another. Good, clean fun! The segments deservedly circulate throughout the internet’s favored corners, bringing joy to readers and traffic-conscious writers alike.

But then there are segments like last night’s self-contained “slam poem” “by” Samuel L. Jackson about Boy Meets World. For three minutes and forty-five seconds, Jackson performed his way through a written piece recapping the plot of the long-departed ABC show. There were references — were there ever references! — to memorable moments in the show’s plot that had long since left our minds. Jackson, affecting the Def Poetry aesthetic (with added bass accompaniment), quoted dialogue from the finale. After a commercial break, he sat down for an interview with the host. “Are you a fan of Boy Meets World?” Fallon asked, to which Jackson replied, “I don’t think I’ve ever seen a single episode of that show.”

Where are the bit’s laughs supposed to come from? The incongruity between Jackson’s style and the source material? (They’re both mid-1990s relics, albeit of different subcultures.) A great actor with high standards debasing himself? (LOL, says Capital One, which also counts Fallon as a spokesman.)

No, the humor, such as it is, springs forth from the goofy knowingness somehow still ascendant in the age of social media. Wait, you watched this show that averaged nearly 10 million weekly viewers during its seven-season run, and lived on long beyond that in syndication? No way, me too! It’s Dennis Miller’s old shtick, minus the jokes and the cultural capital.

Is this the new plan for late-night television? Viral segments with all the heft and permanence of a small bag of cheese puffs? ABC’s Jimmy Kimmel has headed down that road, too, with staged (and invariably viral) videos that derive much of their appeal from the viewer’s assumption that they reflect real, impromptu scenes. Only a lingering mild annoyance at Jimmy Kimmel, upon figuring out the true circumstances behind the videos’ production, makes them stick in the viewer’s mind. But Kimmel and Fallon have clearly seized on something something: web editors need to keep their mills turning, and web readers want to be entertained for free, and no one’s really in a position to complain.

A recent report claimed 36 percent of all internet traffic was fake — it comes from robots. What do you call the other 64 percent? 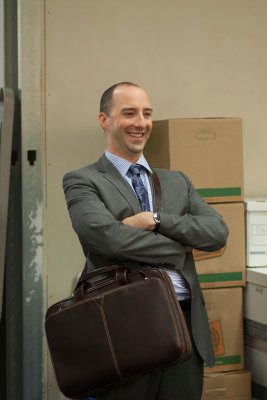 Tony Hale on Veep’s New Season: "It's Absolute Chaos"
Next Up: Editor's Pick