The Way We Teach Math Is Holding Women Back

First Daughter Ivanka Trump and Education Secretary Betsy DeVos toured the National Air and Space Museum with a group of middle school students Tuesday, encouraging girls to pursue careers in science, technology, engineering and mathematics — even while President Donald Trump’s administration put forth a budget proposal that suggests cutting funding for education and research. There is nothing more important than advancing the STEM fields — and those groups who are underrepresented within them.

One area in desperate need of examination is the way we teach mathematics. Many Americans suffer from misconceptions about math. They think people are either born with a “math brain” or not — an idea that has been disproven — and that mathematics is all numbers, procedures and speedy thinking. In reality, mathematicians spend most of their working lives thinking slowly and deeply, investigating complex patterns in multiple dimensions. We sacrifice many people — women and students of color, in particular — at the altar of these myths about math.

Math is a prerequisite for most STEM fields, and the reason many students abandon STEM careers. In higher levels of mathematics, gender imbalances persist: In 2015, about 76% of math doctorates were awarded to men. This figure should prompt alarm in mathematics departments across the country — and encourage focus on an area that is shockingly neglected in discussions of equity: teaching methods in classrooms.

At Stanford University, I teach some of the country’s highest achievers. But when they enter fast-paced lecture halls, even those who were successful in high school mathematics start to think they’re not good enough. One of my undergraduates described the panic she felt when trying to keep pace with a professor: “The material felt like it was flying over my head,” she wrote. “It was like I was watching a lecture at 2x or 3x speed and there was no way to pause or replay it.” She described her fear of failure as “crippling.” This student questioned her intelligence and started to rethink whether she belonged in the field of math at all.

Research tells us that lecturers typically speak at between 100 and 125 words a minute, but students can take note of only about 20 words a minute, often leaving them feeling frustrated and defeated. “I’ve essentially given up in my math class right now,” another student of mine wrote. “In such a fast-paced environment where information is constantly coming at you, there just isn’t time to think deeply about what you are learning.”

The irony of the widespread emphasis on speed in math classrooms, with damaging timed tests given to students from an early age, is that some of the world’s most successful mathematicians describe themselves as slow thinkers. In his autobiography, Laurent Schwartz, winner of the world’s highest award in mathematics, described feeling “stupid” in school because he was a slow thinker. “I was always deeply uncertain about my own intellectual capacity; I thought I was unintelligent,” he wrote. “And it is true that I was, and still am, rather slow. I need time to seize things because I always need to understand them fully.”

When students struggle in speed-driven math classes, they often believe the problem lies within themselves, not realizing that fast-paced lecturing is a faulty teaching method. The students most likely to internalize the problem are women and students of color. This is one of the main reasons that these students choose not to go forward in mathematics and other STEM subjects, and likely why a study found that in 2011, 74% of the STEM workforce was male and 71% was white.

Women are just as capable as men of working at high speed, of course, but I’ve found in my own research that they are more likely to reject subjects that do not give access to deep understanding. The deep understanding that women seek, and are often denied, is exactly what we need to encourage in students of mathematics. I have taught many deep, slow thinkers in mathematics classes over the years. Often, but not always, they are women, and many decide they cannot succeed in mathematics. But when the message about mathematics has changed to emphasize slower, deeper processing, I’ve seen many of these women go on to excel in STEM careers.

When mathematics classes become places where students explore ideas, more often than they watch procedures being rapidly demonstrated by a teacher or professor, we will start to liberate students from feelings of inadequacy. In a recent summer camp with 81 middle school students, we taught mathematics through open, creative lessons to demonstrate how mathematics is about thinking deeply, rather than calculating quickly. After 18 lessons, the students improved their mathematics achievement on standardized tests by an average of 50%, the equivalent of 1.6 years of school. If classrooms across the country would dispel the myths about math and teach differently, we would improve the lives of many students and enable the creation of a more diverse STEM workforce. It will take a generation of young, creative, adaptable and quantitative thinkers to tackle our society’s problems — thinkers that we are currently turning away from mathematics classrooms and lecture halls in droves. 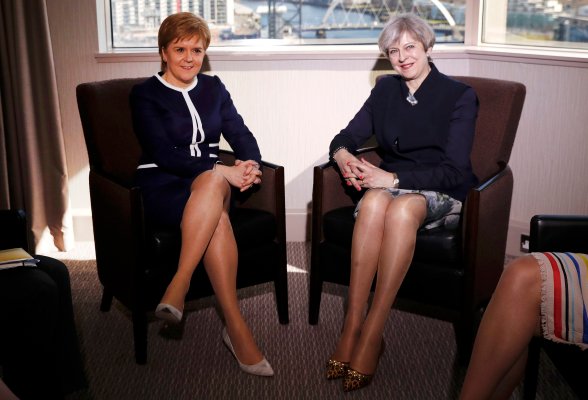 Theresa May and Nicola Sturgeon Respond to Newspaper's ‘Legs-It’ Cover
Next Up: Editor's Pick