Mar-a-Lago
Getty Images
Ideas
By Daniel Benjamin
Benjamin, who served as Coordinator for Counterterrorism at the U.S. State Department, is director of The John Sloan Dickey Center for International Understanding at Dartmouth College.

I’m writing with a modest proposal. You’ve got a lot on your plate. Health care reform blew up. The FBI and Congress are investigating your team’s ties with Russia – a big distraction from your agenda. Lots of people aren’t thrilled with the axe you’ve taken to environmental regulations. There’s more, but you get the picture.

I suggest you do what you do best: Change the subject with a bold move. Only this time, forget tweeting. In my humble view, you should surprise everyone by announcing that you will cover the costs of your frequent travel to Mar-a-Lago as well as security there and at Trump Tower in New York, where Melania and Barron are living. This story is gaining attention, and while most journalists feel they have bigger quarry to hunt right now, the Government Accountability Office is looking into the matter. You should deal with this before it causes too much damage.

Let’s review the details: Your almost weekly visits to your Florida pleasure dome and your wife’s stay in New York have blown a big hole in the budget of the Secret Service, which asked for an additional $60 million to cover its exploding costs just for this year. Additionally, your grown children and their families — appropriately — all have Secret Service details protecting them, so guarding la famille Trump is the biggest long-term task of its kind that the Service has had in decades and maybe ever.

In case you didn’t hear, your staff turned down the Service’s request, so, as they say in government, that $60 million has to come out of hide — which for the Service could mean cutting the budget for missions like combating cybercrime, in which it plays a pivotal role. It doesn’t look good to be cutting those resources when everyone is worried about their bank accounts being emptied by a Moldovan teenager.

It’s also true that the cost of presidential travel is a hardy chestnut for journalists and political opponents. Your predecessor came in for criticism when Malia Obama took a trip to South America just a few months ago. But the costs you are incurring are off the charts. Palm Beach County is deep into overtime for its part of securing Mar-a-Lago, while the New York Police Department reportedly spent $24 million protecting Trump Tower just between Election Day and the Inauguration, and is spending another $130,000 or so every day it needs to be there. According to one estimate, protection costs for your presidency could cost more than $500 million.

Now, there’s no argument: The United States needs to safeguard its Commander-in-Chief. But at the moment, you look more like the Sponger-in-Chief. Your son Eric has boasted “our brand is the hottest it has ever been.” In other words, the money is pouring in. Both the Secret Service and the Department of Defense are renting space in Trump Tower. Although you did donate $78,33 of presidential salary to the National Parks Service — a fraction of your claimed $10 billion net work — your record on personal finances has left something to be desired. You haven’t given the government the profits your hotels derived from foreign guests, which was supposed to eliminate any conflict of interest issue or concerns about “foreign emoluments,” which are forbidden by the Constitution. I guess we can be pretty sure that Mar-a-Lago – which means you – will turn a nice profit when you host Chinese President Xi Jinping on April 6-7.

So you can cover these costs, especially since you recently changed the terms of your trust and can now withdraw funds whenever you like. You might consider playing a little less golf — you criticized President Obama for that and swore you’d give up once in office, but you’re on the links a lot more than he ever was. At this point, some might observe that spending all this taxpayer money so you can go to Florida doesn’t send the right message when you’re cutting after school programs for 1.6 million kids, most of them poor. They have a good point, especially if you really want to end the “American carnage” in the inner cities, where uncared-for children are at risk.

But I would also note that spending this kind of money sends a pretty bad message to the nation’s largest work force: federal employees. Although I’m guessing no one has walked you through this, much of the federal government is run like a small company that can barely make its payroll. It’s part of our legacy from those thrifty Yankee forbears and apostles of limited government in every generation. Sure, there may be some dumb programs and inevitable procurement scandals, but workers aren’t eating cake in the bureaucracy.

During my two stints in government, I was constantly amazed at how few perks civil servants get and how much they will put up with to do their jobs. In the mid-1990s, when I was a speechwriter for President Bill Clinton, I was bowled over when I got bills for the sodas I drank during domestic flights on Air Force One. I’d worked at two Fortune 500 companies before getting to the White House. Neither of them made me pay for my own business cards as the government did.

At the State Department, where I worked from 2009 to 2012, things were worse. It’s pretty dispiriting that even for important meetings, State has no money to serve coffee to guests. It frequently has no computer available for new hires, and it rations smart phones, which is insane for an institution that hinges on communications. Employees pay to keep water in the coolers.

Even so, my staff and colleagues seldom complained because everyone felt public service was an honor. Most got lower salaries than they would have in the private sector but wouldn’t have traded their jobs for a 50% pay hike. They were happy to hand over whatever gifts they got from foreign governments. (I have two ceremonial swords – worth a small fraction of their appraised value — gathering dust in government storage somewhere.) Very few felt like they had been shortchanged for choosing to work for the government; it is its own reward – and the fact that everyone up the chain of command felt the same way created an important bond. Perhaps that’s why there have been relatively few cases of spies in our bureaucracy.

I’m not so sure those feelings will endure in the era of the near weekly, multimillion dollar trip to Mar-a-Lago. In the past, I never heard anyone in government begrudge the boss time off or security costs. It’s a big job, and anything that helps the president keep his head clear and his mind focused is worth the money.

But seriously, if you don’t want a government filled with angry people who feel like they are the suckers and, as a result, don’t want to give it their all, think about all those bills. Sponger-in-chief is not how you want to be remembered. 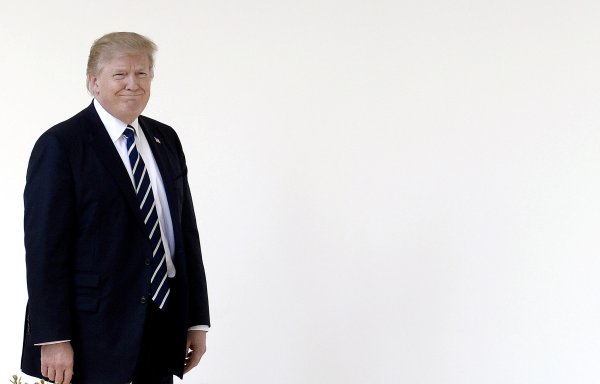 America Should Never Be ‘Great Again’
Next Up: Editor's Pick