Watch: Why the U.S. Entered World War I, in 1 Minute

It was precisely 100 years ago this week that the U.S. made a decision that would alter the course of history for the nation and the world. On April 2, 1917, President Woodrow Wilson asked Congress for a declaration of war against Germany, explaining that that nation’s unrestricted submarine warfare constituted “a warfare against mankind” and that the U.S. policy of “armed neutrality” in the conflict that had been sweeping across Europe was no longer working.

“With a profound sense of the solemn and even tragical character of the step I am taking and of the grave responsibilities which it involves, but in unhesitating obedience to what I deem my constitutional duty,” he said, “I advise that the Congress declare the recent course of the Imperial German Government to be in fact nothing less than war against the government and people of the United States; that it formally accept the status of belligerent which has thus been thrust upon it, and that it take immediate steps not only to put the country in a more thorough state of defense but also to exert all its power and employ all its resources to bring the Government of the German Empire to terms and end the war.”

Within days, Congress passed the resolution that Wilson had requested. On April 6 of that year, a century ago this Thursday, the U.S. declared war on Germany and thus officially entered into the conflict that would come to be known as World War I.

But it was a long journey there for a President who had campaigned on the slogan “He kept us out of war.”

Here are the basics of what changed, in one minute. 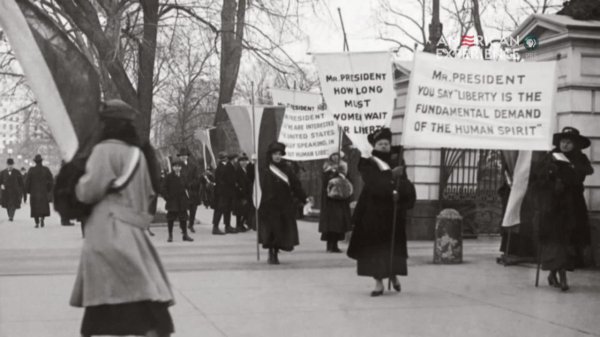 How World War I Helped Women Win the Right to Vote
Next Up: Editor's Pick