Holocaust Survivor Warns Trump Administration: 'History Is Not on Your Side'

Bernard Marks, who survived the Nazi holocaust at the Auschwitz concentration camp, speaks during a town hall meeting with Thomas Homan, acting director of U.S. Immigration and Customs Enforcement (ICE), in Sacramento, California on March 28, 2017.
Stephen Lam—Reuters
By Jennifer Calfas

An 87-year-old Holocaust survivor didn’t mince words when he told off a top immigration enforcement official at a meeting in California Tuesday —warning that history is not on the side of the Trump administration.

Bernard Marks, who said he survived imprisonment in Auschwitz and Dachau concentration camps, spoke out while addressing U.S. Immigration and Customs Enforcement Acting Director Thomas Homan at a public forum in Sacramento.

“When I was a little boy in Poland, for no other reason but for being Jewish, I was hauled off by the Nazis,” Marks told them, CBS Sacramento reported. “And for no other reason I was picked up and separated from my family, who was exterminated in Auschwitz. And I am a survivor of Auschwitz and Dachau.”

“We stand up here, Mr. Jones, don’t forget,” he continued. “History is not on your side.”

Marks’ comments were met with cheers and applause from the audience.

Homan responded to Marks’ comments, insisting that immigration enforcement officials will only arrest people in courthouses, but not on school grounds or at churches. 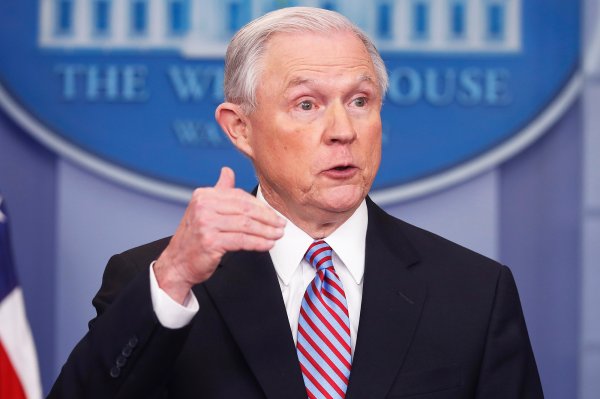 Justice Dept. Will Hold Back Grants to Sanctuary Cities
Next Up: Editor's Pick