Theresa May and Nicola Sturgeon Respond to Newspaper's ‘Legs-It’ Cover

GLASGOW, SCOTLAND - MARCH 27: British Prime Minister Theresa May meets with Scottish First Minister Nicola Sturgeon at the Crown Plaza Hotel on March 27, 2017 in Glasgow, Scotland. The Prime Minister is in Scotland ahead of the triggering of Article 50 later in the week. (Photo by Russell Cheyne - WPA Pool/Getty Images)
WPA Pool—Getty Images
By Samantha Cooney

U.K. Prime Minister Theresa May and Scottish First Minister Nicola Sturgeon are speaking out about a widely-criticized Daily Mail cover that focused on their legs.

On Tuesday, the U.K. tabloid published a picture of May and Sturgeon from a meeting about their disagreements over Brexit on Monday. The Daily Mail captioned the image “Never mind Brexit, who won Legs-it!” British lawmakers and others condemned the cover as “sexist” on social media. (In a statement, the Daily Mail told critics to “get a life” and noted that it has commented on the physical appearance of male politicians in the past.)

May, who triggered Article 50 on Tuesday to initiate negotiations for Britain to leave the European Union, told the Wolverhampton Express and Star that she was used to the scrutiny over her clothing choices by now. “You will notice that I am wearing trousers today,” she said. “As a woman in politics throughout my whole career I have found that very often, what I wear — particularly my shoes — has been an issue that has been looked at rather closely by people … I think that most people concentrate on what we do as politicians. But if people want to have a bit of fun about how we dress, then so be it.”

A spokesperson for Sturgeon had a stronger statement about the cover. “Brexit may risk taking Britain back to the early 1970s, but there is no need for coverage of events to lead the way,” the statement read, according to the Guardian. 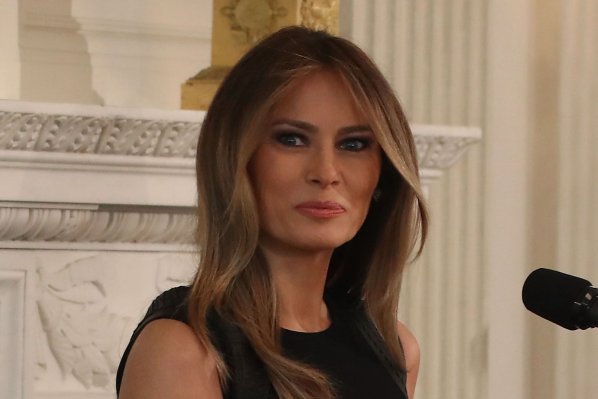 Melania Trump: 'The Time for Empowering Women Around the World Is Now’
Next Up: Editor's Pick