President Donald Trump signed a sweeping executive order Tuesday intended to shift the direction of U.S. environmental policy and begin the process of undoing some of the most significant Obama-era environmental regulations.

The executive order, billed as a measure to promote “energy independence” and create jobs, will target a slew of environmental measures aimed at combating climate change including the Clean Power Plan, the centerpiece of President Obama’s global warming efforts. Some directives take effect immediately, like the end to a moratorium on new leases for coal mining on federal land, while others, like the review of the Clean Power Plan, require a rule making process that could take years to complete.

Speaking at the Environmental Protection Agency (EPA), Trump declared an end to what he called “the war on coal” and promised a “new energy revolution” with a thriving coal and natural gas industry. “The action I’m taking today will eliminate federal overreach, restore economic freedom and allow our companies and our workers to thrive and compete on a level playing field,” said Trump, standing beside coal miners and members of his cabinet. “Together we are going to start a new energy revolution, one that celebrates American production on American soil.”

The move drew praise from some energy interest groups that have long-complained about regulation of their industry, but experts do not expect the order to alter market trends significantly or contribute to a revival of the ailing coal industry. At the same time, the move will all but ensure that the U.S. does not meet its non-binding international commitments to address climate change and will diminish the country’s position as a leader on the issue cultivated under Obama.

“The wrecking ball that is the Trump presidency continues,” says Ken Kimmell, president of the Union of Concerned Scientists, in an emailed statement. “The executive order undercuts a key part of the nation’s response to climate change, without offering even a hint of what will replace it.”

Trump’s executive order follows weeks of speculation. Administration officials said the White House worked to ensure that the order did not encounter many of the legal issues that troubled its early immigration executive order.

The Clean Power Plan ranks as the most significant regulation targeted by the executive order, and Trump cannot undo that measure with a simple stroke of the pen. Instead, his move Tuesday will direct the EPA to begin reevaluating the rule. A senior White House official told journalists Monday that the process could result in “revising, improving or updating” the regulation and not necessarily outright repeal appeal.

Completely scrapping the rule would require the EPA to replace it with an alternative. The Supreme Court has previously held that the EPA must regulate gases that contribute to climate change unless the agency provides a scientific reason not to do so. The EPA did the opposite in 2009 when it issued a document known as the endangerment finding that used science to explain the dangers posed by carbon dioxide.

Research from the Energy Information Administration suggests that the use of coal for electricity will flatline without the Clean Power Plan and continue to decline with it. Either way growth in natural gas, which has declined precipitously in cost over the last decade, will continue to outpace coal. And renewable energy companies, namely those in wind and solar, now employ far more people than the coal industry.

“It’s nonsense,” says Mark Barteau, director of the University of Michigan Energy Institute, of Trump’s promise to restore coal. “Coal is not coming back. It’s going to continue to lose to cheap natural gas.”

The executive order also ends a moratorium launched under Obama on new leases of federal land for coal mining, scraps a measure of the economic impact of climate change used to justify regulation known as the “social cost of carbon” and changes how climate change is considered in federal policy-making.

The measure does not address whether the U.S. will remain in the Paris Agreement on climate change, and the White House official said Monday that the global climate deal remains “under discussion.” Trump promised to withdraw from the agreement on the campaign trail, but has reportedly reconsidered under pressure from his daughter Ivanka and Secretary of State Rex Tillerson.

The White House has described the executive order as one of many measures that will help the administration fulfill its campaign promises on energy, particularly job creation. But energy experts are skeptical it will move the needle independent of some change in market dynamics.

“I don’t think the primary barrier is regulation,” says Jason Bordoff, an Obama energy advisor who runs Columbia University’s Center on Global Energy Policy. “I think the ability for oil and gas production to ramp back up will depend on what happens in the market.” 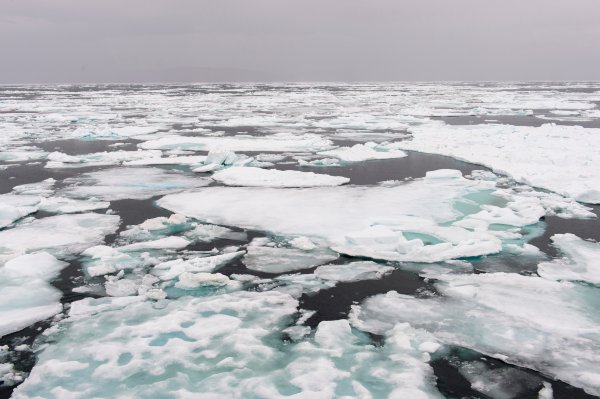 Arctic Sea Ice Has Disappointing Winter
Next Up: Editor's Pick