One Reason Health Care Vote Is So Tricky: Everything Involved Is Unpopular

Republicans are moving into a health care vote Friday with opposition from the Democrats and from the moderate and conservative wings of their own party. But they’re also facing disapproval from the American public.

According to a series of polls, nearly every aspect of the dynamic unfolding around Republicans’ plan to repeal and replace the Affordable Care Act is unpopular.

Here’s a breakdown of the polling data.

The numbers are even starker over a central tenet of the plan, cutting federal funding for Medicaid: 74 percent of respondents oppose it and just 22 percent support it. More than half of Republicans oppose the measure as well.

As for cutting off federal funding to Planned Parenthood, an aspect of the plan Trump lauded in a tweet Friday morning, 61 percent of voters oppose taking away the funds and 33 percent support it.

The Quinnipiac poll is based on a survey of 1,056 voters nationwide between March 16 – 21 and has a margin of error of +/- 3 percentage points.

A Gallup tracking survey on Trump’s approval rating found that as of March 22, two days before the healthcare vote, 56 percent of Americans disapproved of the job he’s doing as president, and 39 percent approved. And according to the Quinnipiac poll, 61 percent of voters disapprove of the way Trump has handled healthcare specifically.

The Gallup data is based on a survey of 1,500 national adults and has a margin of error of+/- 3 percentage points.

Less than one third of Americans think Congress is doing a good job, according to a Gallup poll, which found Congress had 28 percent approval in February. (To be fair, that’s actually the highest it’s been rated since 2009, and it is up from 19 percent approval one month earlier.)

The poll is based on interviews with a random sample of 1,035 adults nationwide between Feb. 1-5 and has a margin of error of +/- 4 percentage points. 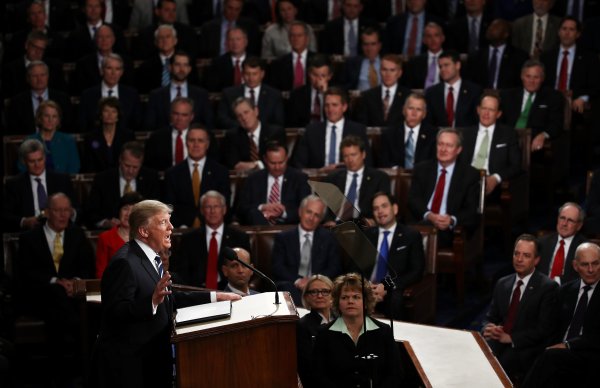 Watch Live: The House Votes on Legislation to Repeal Obamacare
Next Up: Editor's Pick