In the end, they were the biggest thing standing in its way.

Late on Thursday night, members of the hard-right House Freedom Caucus huddled for a soul-searching meeting in a congressional office south of the Capitol, discussing whether they could support the Republican bill to repeal and replace Obamacare.

They had won numerous concessions from Republican leadership in the past several weeks, they acknowledged, but still, many said, the GOP bill did not go far enough in repealing Obamacare.

Emerging from the office at around 11 p.m., ties loosened and top buttons undone, many of the exhausted Freedom Caucus members said they could not commit to the Republican plan.

“We told people we were going to repeal. This bill does not repeal,” said Representative Paul Gosar of Arizona. “I haven’t liked what I’ve seen.”

“100% repeal,” said Representative Ted Yoho of Florida. “I ran on that, I got sent up here for that, this bill does not do that.”

If the Republican bill to replace Obamacare fails to pass the House on Friday, it will be because of this hardened core group of conservatives.

It is the great irony of the effort to repeal Obamacare: Republicans, finally in power and in full control of the White House and Congress, have been unable to agree on the best way to repeal the law after years of calling for its end and repeated show votes to do so under President Obama.

On one side, moderate Republicans want to make sure poorer people are protected by keeping parts of the law in place. On the other side, rock-ribbed conservatives have called for nothing less than a full repeal of the Democratic law — a demand that is likely impossible under current rules.

The fight between conservatives and the Republican leadership is nothing new. But now, on the eve of the fateful vote and after years of promising to repeal Obamacare, many Republicans are seething at the small group of far-right conservatives for imperiling their chance.

“Of course it’s frustrating,” Representative Chris Collins of New York, who is supporting the bill, said Thursday night. “Letting perfect be the enemy of good isn’t good. Or acceptable to any of us.”

“Tomorrow we’re either standing together, 216 strong, or not,” Collins said.

President Trump, Speaker of the House Paul Ryan and numerous other top Republicans have staked much of their legislative agenda on getting the GOP bill passed. Trump has personally called members of the Freedom Caucus in recent weeks, inviting them to the Oval Office, meeting their demands, cajoling, pleading and nagging them to support the bill.

There are nearly 40 Freedom Caucus members, and early Thursday, almost 20 members were firmly in opposition to the bill, and several more had concerns. That number of conservatives, along with some moderates who are opposing the Republican law, was enough to sink it as of early Friday morning.

Many are worried about the poor score for the law from the Congressional Budget Office, which said that 24 million people would eventually lose their insurance under the replacement. Others have an eye on the polls: 56% of Americans disapprove of the law, and just 17% approve. The current bill would not much satisfy deficit hawks, either: it saves only $150 billion over the next decade.

The Freedom Caucus members — many of whom were among Trump’s earliest supporters — applauded the President’s outreach, and thanked him for making concessions over Medicaid and tax credits. Still, some remained a flat “no” even after Republican leaders made last-minute changes to undo some Obamacare regulations.

“I believe there are enough House Freedom caucus members” to bring down the bill, Representative Justin Amash of Michigan, a caucus member said after the meeting on Thursday night.

For Trump, it is the first major test of his presidential term. If the President fails to get the bill passed, it will be an embarrassing setback and could endanger much of his congressional agenda. And even if he gets it passed in the House, it face steep odds in the Senate.

Thursday night’s meeting marked the culmination of weeks of meetings and negotiations by the Freedom Caucus. The current Republican bill, largely written by Ryan and his allies, keeps some of Obamacare in place, including providing subsidies for low-income earners to purchase health insurance, and parts of the expansion in Medicaid.

The Freedom Caucus and other conservative members of the House managed to amend the original Republican bill to create work requirements for Medicaid, which insures low-income earners, and allow states to block-grant funding for the program. That will likely have the effect of reducing the number of Medicaid recipients.

Conservatives also won a provision phasing out taxes on the rich earlier than the original bill called for.

Still, the conservatives were adamant about repealing regulations in Obamacare that required insurers to provide certain services, or “essential health benefits,” including covering prescription drugs, maternity care and preventive services. “Regulations repealed. Get the cost down, and then we’re ‘yes,’” Representative David Brat of Virginia told TIME earlier this week.

Many Freedom Caucus members believe that only a full repeal of the law will lead to a free market health care system, where insurers can compete and ultimately offer cheaper plans. The current Republican bill would not significantly reduce the cost of premiums, according to official estimates.

But fully repealing Obamacare is likely not possible. In order to do so, Republicans would need 60 votes in the Senate in order to break a filibuster, and they now only have 52. So they are repealing it under a special budget measure that only requires a simply majority, but also restricts what parts of Obamacare they can do away with.

After Republican leadership huddled with the Freedom Caucus on Thursday afternoon in Ryan’s office, a last-minute change to the bill was announced that would repeal many of the regulations.

But for those who wanted a full repeal, it still wasn’t enough.

“We had asked for more and more reasonable things. It’s not great,” said Representative Scott Perry of Pennsylvania after the Freedom Caucus meeting. “It’s been a long day. We’re trying to take stock of what occurred and what might occur.”

The question for the conservatives now is whether they can vote against the bill that goes halfway toward fulfilling their promise.

Many of the weary members of the Freedom Caucus are keeping mum until the morning, when they will reconvene for another last-minute meeting.

“I want it to succeed, and I’m not convinced in its current form that it can,” said Representative Scott DesJarlais of Tennessee, wearing white shirtsleeves and walking slowly toward the exit of the congressional office building. “We’ll see what the morning brings. Never hurts to sleep on it.” 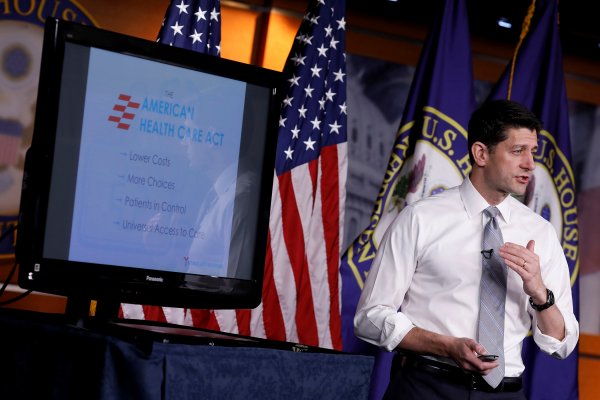 GOP Bill on Life Support
Next Up: Editor's Pick