Bill Clinton Said He 'Didn't Inhale' 25 Years Ago—But the History of U.S. Presidents and Drugs Is Much Older

Bill Clinton speaks at a Sheraton hotel March 31, 1992 in New York City, shortly after saying that he did not inhale when he tried marijuana.
Porter Gifford / Getty Images
By Olivia B. Waxman

Twenty-five years ago, on Mar. 29, 1992, Bill Clinton said something surprising during his ultimately successful campaign for the presidency: in response to what TIME called a “surgically worded question,” then-Arkansas Governor had to admit that he had tried pot as a 20-something Rhodes Scholar at the University of Oxford.

“I’ve never broken a state law,” he said at a candidates’ forum. “But when I was in England I experimented with marijuana a time or two, and I didn’t like it. I didn’t inhale it, and never tried it again.”

At the time, comedian Johnny Carson joked, “That’s the trouble with the Democrats. Even when they do something wrong, they don’t do it right.”

Though the admission made headlines at the time and was seen by observers as a sign of the times — in previous campaigns, some noted, the remark would have been the end of the road — he was in fact far from the first President to have used drugs. Though claims that various 19th century presidents smoked marijuana aren’t uncommon, these accounts are likely dubious because trade hadn’t opened yet to Cuba and the Caribbean, so “whatever hemp was in the U.S. at the time wasn’t strong, and was probably just used to make clothes,” according to Brian Abrams, author of Party Like a President: True Tales of Inebriation, Lechery and Mischief from the Oval Office.

But that doesn’t mean the history of U.S. presidents using drugs that we’d recognize today as illicit doesn’t go all the way back to the beginning.

In fact, George Washington himself relied on laudanum, an opiate, to deal with chronic pain. Washington’s treatment was a common one at the time, but the substance was addictive and caused a high. “His painful, ill-fitting dentures made Washington’s mouth bulge out; he clamped his lips to hold them in,” according to the Smithsonian. “Supposedly he lost his teeth by cracking Brazil nuts between his jaws. By the time he became President, he had only one tooth left. One set of dentures was carved from hippopotamus tusk and had a space to accommodate the single tooth. This caused almost constant pain, which he tried to ease with laudanum.”

Some of the drugs used by presidents were even weirder. For example, Abraham Lincoln was known to take a “blue mass” or “blue pill”—a medicine that scientists say was really “finely dispersed elemental mercury” that was commonly prescribed in the 19th century to treat melancholy or “hypochondriasis.” Studies say he likely suffered from mercury poisoning. According to Norbert Hirschhorn, during the 1850s Lincoln was known to go from bouts of “jumping up suddenly and running out of the house for no reason” to bursting out into “inappropriate laughter.” But experts believe that once he realized that the mercury appeared to be causing his mood swings, he stopped taking the drug after his inauguration.

By the 20th century, the drugs in question bore a lot more similarity to those used recreationally and medicinally today.

According to Abrams’s book, at the height of the Cold War, John F. Kennedy reportedly smoked three marijuana cigarettes with a mistress, but “when offered a fourth joint, the president begged off,” saying, “Suppose the Russians did something now.” During the 1960 presidential campaign and his first term, Kennedy—who suffered from consistent and extreme pain—is also said to have gotten hooked on narcotics for medicinal purposes administered by doctor who practiced on Manhattan’s Upper East Side, who was known as “Dr. Feelgood” and was known for doling out amphetamine to celebrity patients. When Kennedy’s brother Robert suggested he lay off them, he said, “I don’t care if it’s horse piss. It works.” (Dr. Feelgood’s license was revoked in 1975.) A doctor who reviewed JFK’s medical records in 2002 concluded that he was “being treated with narcotics all the time” and that’s why he was constantly tired.

In the post-Clinton years, things have continued to evolve.

George W. Bush had a religious awakening while he got sober around age 40, but had a more wild lifestyle prior to that change. According to Abrams’s book, while Bush was living in an apartment in Houston in the 1970s, he drank and did cocaine at a nightspot called the Mileau. Author J.H. Hatfield’s controversial Bush biography Fortunate Son also alleges that he was arrested for possession of cocaine.

Bush, like his predecessor, was less than enthusiastic about going public with that part of his life. In 2005, audio leaked of a conversation that 43 appeared to have with an aide about how to avoid questions about past drug use, insisting that he “wouldn’t answer the marijuana question” because he didn’t want to have a kid to say “President Bush tried marijuana, I think I will.” Later in the tape, he says that if he’s asked about cocaine, “rather than saying no,” he would “draw the line and look people in the eye and say, you know, ‘I’m not going to participate in ugly rumors about me and blame my opponent,’ and hold the line.”

But, by the time Barack Obama came to office in 2008, the social change that Clinton’s admission was said to have heralded had clearly taken effect. It was no secret during his term that, as a teen at Hawaii’s Punahou School, Obama had been a member of the “Choom Gang” and had even thanked his drug dealer Ray in his yearbook. In his second memoir Dreams from My Father: A Story of Race and Inheritance, the 44th president said he did drugs to take his mind off of his strained relationship with his father, who lived in Kenya: “Pot had helped, and booze; maybe a little blow when you could afford it.” 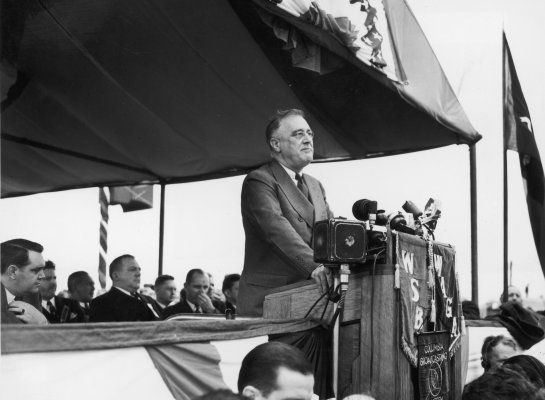 A U.S. President Tried to 'Purge' Members of Congress From His Own Party. Here's Why It Failed
Next Up: Editor's Pick