10 Things to See at the Format Photo Festival

Format photography festival in Derby, UK, returns this week for its eighth edition, taking “habitat” as its central theme. Featuring more than 200 international artists and photographers across 30 exhibitions, the biennial, established in 2004, this year explores important and pressing topics such as mobility and migration, home and displacement, and conflict and regeneration through photography, film, interactive installations, sculpture and documents. In particular, the festival considers how humans have changed planet Earth through industry and technology, and how these changes impact the way we live now and may live in the future.

Here are 10 exhibitions to see and events to attend during the festival.

1. Open your mind and imagine what the future could be like

The festival’s flagship exhibition, Ahead Still Lies Our Future, features work by ten photographers who, through photography, virtual reality and installation, explore some of the many ways we inhabit this planet we call home. Curated by Hester Keijser and Louise Clements, the exhibition takes human’s impact on the Earth as its starting point, taking in notions of climate change and how rapidly accelerating changes in the biosphere are ushering mankind towards alternative ways of living. Highlights include Ester Vonplon’s elegiac body of work focusing on melting glaciers in Switzerland; Lisa Barnard’s exploration of gold – the mythology behind it, and its impact on our world; Sohrab Hura’s depiction of life in the extreme summer heat in Central India; and Sadie Wechsler’s dystopian and disturbing reflections on the natural world.

Sometimes the best ideas are those that come to us out of the blue. So it was with John MacLean’s Hometowns, a series that explores the places well-known photographers once called home. The idea to “photograph the hometowns of your heroes” came to MacLean several years ago and evolved into a body of work that has seen the photographer visit and photograph more than 20 cities, towns and neighborhoods around the world – places where his artistic heroes grew up. Look at Robert Frank’s hometown from a strikingly different viewpoint; see New York’s Staten Island – home at one time to John Gossage – anew; experience John Baldessari’s Californian neighborhood in a strange, new way. MacLean’s series, part of an exhibition featuring multiple bodies of work sourced through an international open call, is one photographer’s imaginatively realized homage to the ordinary places that informed the lives of the photographers that inspire him most.

W. W. Winter in Derby is the UK’s oldest continually running photography business. Founded in 1852, the studio has been operating at its current Grade II-listed premises since 1867, and over the decades has produced copious portraits of local folk including many family portraits. Works and artifacts from the studio’s rich photographic archive – which contains tens of thousands of negatives and prints – have been carefully selected by curator Greg Hobson, and will be on show Derby Museum and Art Gallery. Visitors will be able to see glass plate studio portraits made in the mid-19th century, portraits that reveal the varying conventions of photographic portraiture over time, as well as studio props and backdrops that offer insight into the photography studios of yesteryear. A specially-created Victorian Portrait Studio will also be installed.

Format is hosting a handful of immersive and experiential shows during its month-long run. Drawing on the idea of the flâneur – a wanderer and observer of everyday life. Flâneur: New Urban Narratives commissioned photographers in 12 countries to create images in response to place. The resulting 26 bodies of work made over three years explore the dynamic relationship between photography and the urban environment. Format will host the project’s finale, which includes an outdoor exhibition of selected images from the project displayed on lightboxes. Don’t miss Miniclick’s site-specific, participatory installation made in response to the festival’s central theme, ‘habitat’. Produced in collaboration with Blindboys and in partnership with Delhi Photo Festival, MobFormat: Open House features images sourced through international open calls printed onto giant playing cards, which visitors can assemble into structures. The installation includes an audio soundscape featuring participants’ thoughts on what home means to them.

Also look out for Defrost Studio’s makeshift house inspired by their publication ImmoRefugee, which uses the banal visual language of a real estate catalogue to present different typologies of house. The properties ‘for sale’ in this instance are the manmade homes in the now demolished Calais Jungle, the hope being that this approach will offer – without being disrespectful – a different perspective on the issue of migration, outside of what the media is reporting.

5. Get your picture taken in an old-fashioned photo studio

When art director and set designer Aradhana Seth (The Darjeeling Limited) created her traveling photo booth inspired by India’s old photo studios, she hoped to engage everyday people in photography in playful ways. The public art project, which goes by the name of The Merchant of Images, took place first in Vancouver, and now Seth is bringing her photo booth to Format. In our selfie-driven age where photography is fast and disposable, the project harks back to a time when having your picture taken in a studio was a memorable experience. In particular, it references the act of making a photographic portrait in India where fantastical backdrops were often used, and clients were encouraged to assume theatrical staged poses.

It may be an unusual to find a play at a photography festival but in The Lisa and John Slideshow, David Moore draws on his series Pictures from the Real World, which offers an insight into working class domestic life in Derby in the late 1980s. Using a combination of photography and theatrical tableaux, Moore, who has been exploring documentary photography’s links to theatre and performance in recent years, collaborated with two subjects of his photographs, Lisa and John, writing a script based on discussions they’d had about the images. Two performances will take place on March 25 and are free to attend. In Derby Cathedral visitors will be able to see an installation featuring maquettes of Moore making these photographs.

Saraswati, 16, must live in a closed dark room with her baby because she bled after childbirth.
Poulomi Basu

7. Immerse yourself in a series of talks to get the grey matter going

Professionals from the photography industry will put many of the themes of the festival into context through lively discussions at the Format Conference, which takes place on March 24. See speakers discuss a range of topics including humans’ impact on the environment and climate, the notion of habitat, socially engaged photography practices, photobook culture, and the nature of commissioning, among other topics. Speakers include Magnum Photos’ Anne Bourgeois-Vignon and Martin Parr, and photographer Poulomi Basu who will talk about how in her latest project she goes beyond conventional storytelling, using virtual reality and projections as well as photography to highlight gender-based violence against women in Nepal and India. Basu’s A Ritual of Exile spotlights the practice of Chhaupadi where menstruating girls and women are cruelly exiled. Work from Basu’s series will be on show at Pearson’s, a 19th century former school.

8. Be inspired by eclectic work from international photographers

There is so much work on show it is impossible to name-check every photographer, but notable mentions include: Katrin Koenning whose long-form work The Crossing considers humans’ impact on the Australian ecology and reflects more broadly on how nature is adapting and evolving in light of human-induced change; Mark Wright, who has produced a contemplative body of work in conjunction with Grain Projects that looks at the communities and landscapes affected by preliminary fracking interventions in the north of England; Edgar Martins, who was given unparalleled access by the European Space Agency (ESA) to photograph inside its space exploration facilities worldwide. Elsewhere, Jan McCullough found tips on ‘how to make the perfect home’ through online forums and used these to create her own home, which she then photographed, posing questions about our desires surrounding the notion of home; Nikolas Ventourakis and his Defining Lines series explores the concept of ‘border’ by tracing the invisible borderlines around a British controlled military site in Cyprus through photography and Google Maps. And Laurent Chéhère’s photographs of flying houses inspired by the cosmopolitan neighborhood of Paris where he lives, which are truly uplifting.

9. See birds in a new light and embark on a Balkan journey in two noteworthy group shows

On a day-to-day basis, birds are nothing extraordinary; but seen through the eyes of the photographers in Modern Ornithologies they take on new presence and meaning. In essence, the exhibition looks at our fascination with these winged creatures. Going beyond straightforward documentation, the projects explore the ways we relate to birds and highlight some of the worlds they and we inhabit. For example, Cases – through his vibrant, colorful images – tells the story of pigeon races in his native Spain, while Parr accompanies a pigeon breeder and racer to pigeon races and auctions in China and Mongolia. Through their poetic, resonating images, Maria Sturm and Cemre Yesil relay the ancient yet threatened bird cultivating culture of Istanbul through the story of the birdmen who live there, and Leon Reindl tells a story of how conservationists in New Zealand have been trying to save a rare parrot species.

Elsewhere, Balkan Trails sees Slovenian photographers Ciril Jazbec, Matej Povše, Boštjan Pucelj and Matic Zorman document the dangerous journeys made by mainly Syrian refugees along the Balkans route – from Greece to Central Europe – as they go in search of a new home.

10. Catch immersive film screenings, get involved in a workshop or buy a book

Consider joining one of the film screenings over the course of the festival. Highlights include Citizen Jane: Battle for the City, a critically acclaimed documentary about activist and novelist Jane Jacobs and her fight in the 1960s to protect New York City’s historic neighborhoods from the threat of redevelopment. The film traces Jacobs’s legacy and her historic book The Death and Life of Great American Cities, which impacted the way we think about cities and urban living. Or embark on a journey across distant lands in Samsara, shot entirely on 70mm film, which whisks viewers through an array of incredible landscapes and cultures across 25 countries.

Lastly, get stuck into workshops that explore techniques such as sublimation printing, bookbinding and constructing a habitat through Minecraft, or peruse the wide range of photography books on sale in the Photobook Market, curated for this edition by art director, Sebastian Arthur Hau.

Gemma Padley is a freelance writer specializing in photography. She is based in London.

Most Popular on TIME
1
U.S. Swing States Revealed a Nation Plagued by Misinformation
2
Pope Francis Offers New Support for Same-Sex Unions
3
Sacha Baron Cohen: We Must Save Democracy From Conspiracies 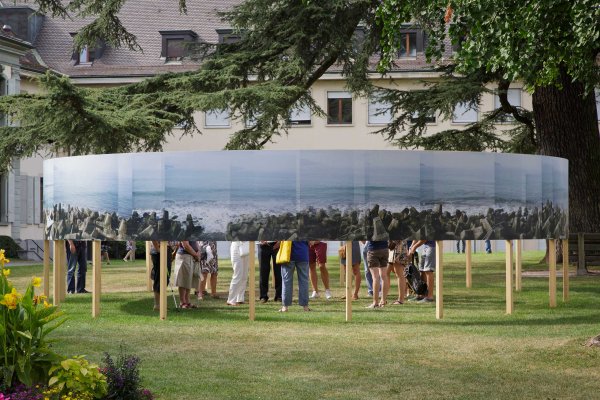 When Photographs Take Over an Entire City
Next Up: Editor's Pick