Slavery is not good, and health care reform is not easy. Seemingly obvious?

Maybe not, according to President Trump, who has said multiple times in speeches and interviews over the last year that “nobody knows” or “people don’t realize” certain facts that are, in fact, widely known.

While this may be little more than a verbal tic, Trump has gotten some criticism from the remarks. On the other hand, he’s not entirely wrong, since there is evidence that a lot of people aren’t aware of at least some of these things.

Abraham Lincoln was a Republican

Earlier this week, Trump thought he was spreading the word — and urged GOP lawmakers to do the same — when he said Abraham Lincoln was a Republican. “Great president. Most people don’t even know he was a Republican,” Trump said Tuesday during an address at a National Republican Congressional Committee fundraiser. “Right? Does anyone know? A lot of people don’t know that. We have to build that up a little bit more.”

Lincoln, the 16th U.S. president who freed the slaves, was the first Republican to lead the nation. Many local Republican groups hold “Lincoln Day Dinners” to honor him, and the GOP is often referred to as the “Party of Lincoln.” More than half of Americans surveyed in a 2012 Pew Research poll knew Lincoln was a Republican. Fifty-five percent of the 1,000 adults surveyed correctly identified Lincoln’s political party, while 28% said he was a Democrat and 17% were unsure. Still, the confusion over Lincoln’s party affiliation can be seen in “man on the street” interviews like a segment in Fox’s O’Reilly Factor in 2014.

While House Republicans were still cooking up a health care plan to replace Obamacare last month, Trump said reforming health care is not an easy task. “I have to tell you, it’s an unbelievably complex subject,” he told a group of governors. “Nobody knew that health care could be so complicated.”

Trump left many people scratching their heads in early February when he said the late Frederick Douglass is gaining more recognition. Trump was praising the famous abolitionist and former slave during a breakfast with black supporters to mark Black History Month when he said Douglass is “an example of somebody who’s done an amazing job and is being recognized more and more,” according to CNN. Trump was speaking about the contributions of black Americans like Rosa Parks and Harriet Tubman ahead of his visit to the National Museum of African-American History and Culture.

Slavery is not good

During his first tour of the National Museum of African-American History and Culture, Trump is said to have come across shackles for slave children and other artifacts and didn’t like what he saw. “Boy, that is just not good. That is not good,” the president reportedly said, according to the Atlanta Journal Constitution. “That is really bad.”

Trump suggested Americans were unaware of how many people his predecessor deported during an interview last month with Fox & Friends. Trump was talking about how he has tougher immigration policies than former President Barack Obama had when he said, “You know, people don’t realize, he deported a lot of people, but we’re focused on the bad people.” Obama was heavily criticized by immigration groups during his tenure for the rate of deportation, and he made headlines last August for deporting more people than any other U.S. president. Immigration groups even dubbed him the “Deporter-in-Chief.” 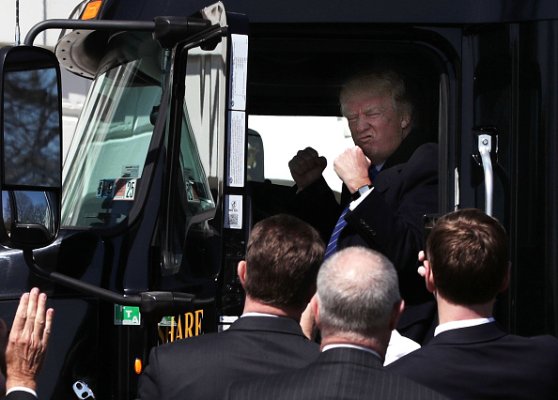 The Internet Is Having a Predictable Field Day With Trump in a Truck
Next Up: Editor's Pick