House Conservatives Say No Deal Yet on Health Care Bill

With just hours before Republicans planned to vote on repealing Obamacare, President Trump failed to reach a deal with a key group of House conservatives to support the GOP health care bill.

At the White House, President Trump met with more than 30 members of the conservative House Freedom Caucus, most of whom have voiced their opposition to the bill in its current form and could sink it.

The signs coming out of the meeting did not look good.

Trump planned to meet with lawmakers in the moderate Tuesday Group on Thursday afternoon.

Meanwhile on Capitol Hill, House Speaker Paul Ryan met one-on-one with moderate Republicans, trying to convince them to sign on to the bill. At least a dozen moderates have said they oppose the bill.

If Trump and Ryan are unsuccessful in changing the Republican skeptics’ minds, they will have squandered what may be their only chance to repeal Obamacare for the foreseeable future.

While Ryan has said for days that the vote would take place on Thursday, it is increasingly unclear whether a vote could be held before Friday morning.

And with all the changes being made on the bill, members have not seen a new score from the Congressional Budget Office that would estimate the number of people the new law would insure, how much insurance premiums would rise or fall, and the effect of the changed bill on the debt.

The original CBO score, released last week before changes were made over the weekend, forecast that 24 million people would lose health insurance under the Republican proposal, and that premiums would rise before falling slightly from current levels.

The sticking point for members of the House Freedom Caucus, who alone could sink the bill, is that the current proposal does not sufficiently reduce health insurance premiums.

Conservatives are bargaining for a repeal of the so-called “essential health benefits” in Obamacare, which require that insurers cover certain services like maternity care, mental health care and prescription drugs.

Trump spent midday on Thursday negotiating with the Freedom Caucus to try to persuade them to vote for the law with the changes.

“If the bill remains the same, I remain opposed to it and cannot vote for it,” Rep. Mark Meadows, chair of the Freedom Caucus, said on Wednesday night. “But if we get to a point where the bill will actually lower premium costs for Americans, I believe we will have accomplished our goal.”

Still, individual Freedom Caucus members remain opposed to it even if changes are made, raising the prospect of undermining the caucus’ influence.

At the same time, House Moderates are increasingly defecting from supporting the bill. On Wednesday night, the chair of the moderate House Tuesday Group, Rep. Charlie Dent, said that he opposed the bill.

With Zeke J. Miller in Washington 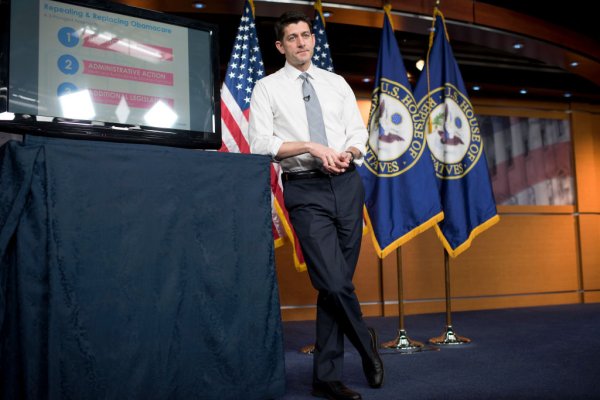 Only 17 Percent of Voters Like the GOP Health Care Bill: Poll
Next Up: Editor's Pick