In the opening scene of the new novel, The Arrangement, Lucy and Owen host another couple for dinner and get some intriguing news: their friends are going to try an open marriage. It’s a moment plucked straight out of the author’s real life. Just like Lucy and Owen, novelist Sarah Dunn and her husband joked around about what it would be like to sleep with other people, guilt-free. They even imagined the rules they might set: no sex with mutual friends, no falling in love, a hard stop after six months. But Dunn and her husband let the joke die there. The characters in The Arrangement, on the other hand, take those rules and run straight into chaos.

This isn’t the first time Dunn has used personal experiences to inspire her art. A mother of two, she’s also the creator of the ABC comedy, American Housewife, which features a married couple based on herself and her husband. In the TV show, the youngest child, Anna-Kat, has Obsessive-Compulsive Disorder. In The Arrangement, Lucy and Owen are raising an autistic son — like Dunn’s own.

Motto spoke with Dunn about her life, her writing and the power of comedy to heal.

Without giving too much away, it’s safe to say that things do not go well for Lucy and Owen. Why do you think their open marriage takes them down the road it does?

If you really want to stay married to the person you’re currently married to, I would not suggest trying an open marriage. I didn’t know how the book would end for a very long time, but I really tried to get them into as much trouble as I could. That was part of it: Asking, “How bad could this get?” I found that it could get pretty bad.

What do you hope readers will take away from the novel?

The part of the book that’s closest to my heart is the relationship between these parents and their autistic son, Wyatt. I have a son who has challenges that I would say are pretty much identical to Wyatt’s. I wish when he was 3 and I was taking him to occupational therapy, I’d had this book, because I would have felt less alone. In my perfect world, somebody would pick up this book and hand it to a woman with an autistic child.

I love how you approach challenging subjects with a sense of humor.

My son happens to be very verbal and very funny. He has learned how to be funny, but he also just says crazy things all the time, things you wouldn’t think of — it’s hard as a writer not to write them down. I would have a rough morning with Harry, and then I would go write runs of his dialogue and think, “Okay, I can do something with this.”

What can comedy do that drama cannot?

With the special needs stuff, the reality can be really difficult. It is really difficult. There are a lot of tears that come with that. It’s probably somewhat of a defense mechanism to find the funny part in it. I had a lot of trouble reading things about special needs kids that weren’t funny, because I was in the middle of it — I was under a pile of struggle. The humor makes people able to see what’s there and also not feel horrible as they read it.

In both The Arrangement and your show, you focus a lot on the children, but also on the relationship between husband and wife. What makes marriage such ripe fodder for fiction?

I used to have a very old fashioned view of marriage, which was that as a woman you had to hold on to your husband because you were going to lose your sexual desirability. Then, you’d be alone. But I would say that has changed for me — the objective isn’t necessarily to stay married at all costs, but to grow together, raise kids and hopefully stay together. It’s funny seeing a marriage on TV that I’ve created. People critique that relationship — they think she’s too mean to her husband. It makes me think. Hopefully I’m being nicer to my husband after the show.

How else has your own marriage been impacted by your work?

To be a creative woman at this age, having these opportunities, I really couldn’t do it if I didn’t have a husband who was willing to be the backstop. I had to drop the ball, and he picked it up and ran with it and has done an amazing job. That’s something that culturally, we need to start working on: It’s not just about giving women the opportunity, it’s also about giving men the respect when they decide to focus on family. It’s still hard for my husband to go to a cocktail party and when someone asks him what he does, to say, “Right now I’m a stay-at-home dad.” That’s the part that our culture has not caught up with yet. 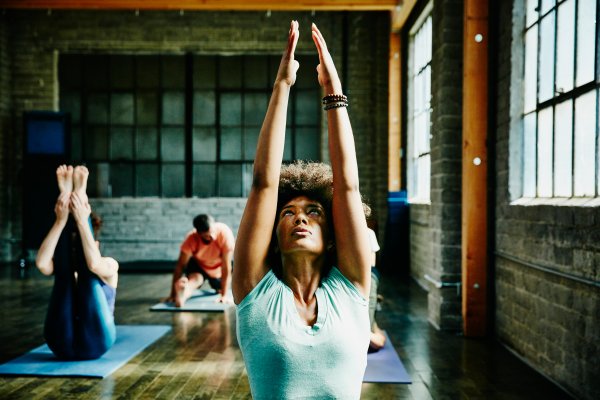 How to Burn More Calories During Any Type of Workout
Next Up: Editor's Pick