Review: In 'The Twelve Lives' of Samuel Hawley,' Hercules Wields a Shotgun

Ideas
By Lucy Feldman
Feldman is a Senior Editor for TIME.

Even before the official release of The Twelve Lives of Samuel Hawley in March, early readers deemed it worthy of excitement. The novel–at once a coming-of-age adventure, a love story and a literary thriller–has appeared on several most-anticipated books lists for 2017, has been blurbed by the likes of Ann Patchett and Richard Russo and was snapped up by Hollywood and optioned for television.

Author Hannah Tinti was already armed with literary credentials. She co-founded the magazine One Story in 2002. Her short-story collection Animal Crackers sold in 16 countries. And her 2008 debut novel, The Good Thief, anointed her a best-selling author and drew comparisons to Dickens.

Twelve Lives conjures even more storied roots: Tinti, the daughter of a librarian, says she turned to her bookshelf while writing and plucked a volume of ancient mythology. Samuel Hawley is a rugged, gun-toting single father (call Brad Pitt’s agent) with 12 bullet scars, inspired by the 12 labors that Hercules performed as penance for murdering his family. “There are dark stories behind heroes, terrible things they have to do to accomplish their goals,” Tinti explains.

By that definition, Hawley certainly qualifies as a hero. He blurs the lines between caregiver and criminal, raising his daughter Loo on the run, while keeping secret how her mother died. Half of the chapters follow Loo, telling the story of a girl raised a little bit wild. The rest flash to Hawley’s far darker past, plunging into scenes of crime and revenge.

Tinti drops familiar objects and people (a pair of lace gloves, a bearskin rug, a troubled old friend) into both father’s and daughter’s stories, showing how much we inherit from our parents and poking through the boundaries of time. “Our lives can repeat,” she says. “I try to find moments where I can feel more connected.”

Running through her body of work is a fascination with the tension between people’s best and basest behavior, as in Hawley’s struggle to reconcile his current and former selves. “What pushes people in one direction or another, to give in to that animalistic side?” Tinti ponders. “There’s a teetering on the edge.” 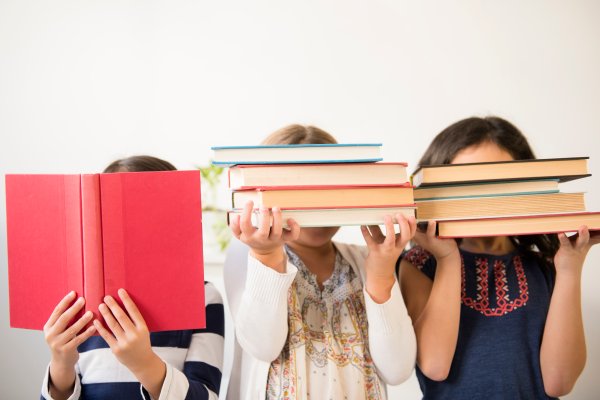 6 LGBTQ Books for Young Readers
Next Up: Editor's Pick