Espen Stoknes is Director of the Center for Green Growth, Norwegian Business School in Oslo, Norway; Bowman is the founder of Bowman Design Group and the founder/president of Bowman Change, Inc.

Donald Trump signed an executive order at the Environmental Protection Agency to undo widely-supported Obama-era climate policies. The Trump Administration is also seeking a 31 percent cut to the EPA’s budget and to eliminate most climate research programs at the National Oceanic and Atmospheric Administration. These cuts would dramatically slash funding for the nation’s leading climate research and environmental policing agencies. Between the executive order, the cuts and the Administration’s sweeping deregulatory agenda, it appears that the White House is trying to revive fossil fuels. Yet while the Administration could do a lot of damage to our health and businesses, its policies are doomed to fail because they ignore two crucial trends.

The Trump Administration’s first mistake is ignoring solid science. EPA Director Scott Pruitt’s assertion that carbon dioxide is not causing climate change is contradicted by 97 percent of climate scientists and every national science academy in the world.

Ideology is no match for nature. The carbon pollution from coal, oil and natural gas really is trapping more heat in the atmosphere. The Oroville Dam emergency in California is only the most recent indication that climate change is outpacing our efforts to adapt — with devastating consequences for American infrastructure.

Its second mistake is ignoring market forces. On price alone, fossil fuels are facing inevitable decline. Solar energy system prices fell by 25 percent in 2016. Half a million solar panels were installed every day of the year before, and solar is growing at an annual rate of about 30 percent. Overall, renewable sources provided 63 percent of new electricity generation this past year. China recently signaled a shift to renewable energy by canceling plans for 103 new coal-fired power plants, some of which were already under construction.

The Trump Administration cannot halt the revolution that is underway in energy, which is the world’s largest marketplace. Globally, there are now more jobs in renewable energy than in oil, gas and coal combined. If annual installations continue to grow at rates declining from today’s, there will still be enough clean power for each of the 9 billion people who will populate the Earth in 2050.

Sustaining such high growth rates might be farfetched, because renewable energy is not the most profitable option in every circumstance. (In developed countries, for example, low demand for new energy forces new renewables to compete with existing power plants.) But the underlying economics are sound. Promising jobs to displaced coal workers and de-funding climate research and the Clean Power Plan will not alter the facts: As the cost of renewables falls, the relative cost of fossil fuels rises. We have reached a point where increasingly expensive fossil energy development and extraction is becoming unprofitable.

These developments suggest that we can solve global warming profitably. Investors are already moving their money to growth opportunities in renewables and smart electrification. With China reorienting its national economic plan around renewables, they threaten to out-compete America in this 21st-century market if we falter.

This is where government leadership matters. The simplest way to lead and accelerate an inevitable market shift to renewables is to limit fossil fuel growth, as some European countries are doing. In Germany, for example, new gasoline and diesel cars will not be sold after 2030. Norway is preparing to ban oil heating in buildings after 2020. The World Bank no longer finances coal power, except in rare cases where no feasible alternatives exist.

Enabling the fossil fuel industry to cut corners, by revoking clean water rules, for example, is not a job-creation strategy. It will, however, put people’s health at risk in coal-producing states. The coal industry is suffering from other problems, chief among them is that renewables are getting cheaper, and the easiest-to-reach coal has already been extracted. No federal policy can overcome these trends.

Whether through regulations, such as new fuel economy standard for vehicles, or a carbon tax that sends the revenue directly to American consumers, the government can accelerate a market transition that is already creating wealth and economic opportunity. North Carolina ranks second nationwide in solar energy capacity that power nearly 350,000 homes. Last year, Iowa became the first state to generate more than 35 percent of its electricity from wind. (Almost all wind turbines in the U.S. are located in rural areas.) California, which boasts an aggressive mix of market incentives and clean-air regulations, has seen its economy grow from eighth to sixth place in world economic rankings. The Golden State leads all other states in total manufacturing output and employs about 500,000 workers in the nation’s largest advanced-energy industry

California has proven that clean energy policies stimulate entrepreneurs, create new jobs and increase consumer choice — while protecting people’s health. The Trump Administration would be wise to take heed and help create new opportunities in coal country. This is an American Dream worth fighting for.

Espen Stoknes is Director of the Center for Green Growth, Norwegian Business School in Oslo, Norway, and the author of What We Think About When We Try Not to Think About Global Warming. Bowman is the founder of Bowman Design Group and the founder/president of Bowman Change, Inc., as well as the author of The Green Edge. 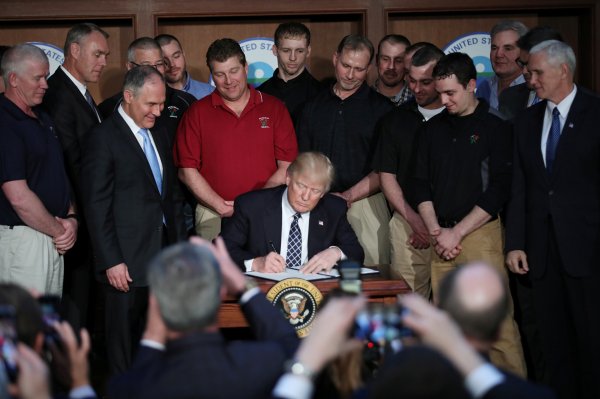