Though Lena Dunham says the fact that her critically lauded HBO show is finally nearing the end of its five-year run hasn’t sunk in just yet, the struggle of working amid an industry obsessed with image is a reality she grapples with every day.

Appearing on Wednesday’s episode of The Ellen DeGeneres Show, Dunham combatted criticism of her fluctuating weight after detractors labeled her a ‘hypocrite’ for debuting a slimmer figure earlier this year.

“It’s just so crazy because I spent six years of my career being called ‘bag of milk’ on the internet… ‘bag of milk,’ ‘baby cow,’ ‘aging cow,’… I never felt self conscious about it. Anyone who was going to take the time to say something negative about my weight on the internet wasn’t someone I was particularly keen to impress anyway,” the Girls creator told DeGeneres. “Then, I had this experience of my body changing and suddenly I got all these people being like, ‘You’re a hypocrite! I thought you were body positive! I thought you were a person who embraces bodies of all sizes!’ I do, I just understand bodies change. We live a long time. Things happen. [My Girls costar] Andrew Rannels could get very fat. We don’t know.”

Dunham, who first made a major mark on the film industry as the writer, director, and star of the 2010 indie hit Tiny Furniture, has since established herself as a leading voice for millennial feminists across six seasons of Girls, which airs its final episode April 16. Dunham has been open about her own struggles with body image issues in the past, though she now sees the criticism as a byproduct of her chosen career.

“As a woman in Hollywood, you just can’t win,” she explained. DeGeneres responded: “Yeah, you can’t win if they think you’re too heavy or too thin.”

Last week, Dunham shared a lengthy address to her followers on Instagram in which she advocated for acceptance of the female body — including her own.

“I’ve gone on red carpets in couture as a size 14. I’ve done sex scenes days after surgery, mottled with scars,” she wrote. “I’ve accepted that my body is an ever changing organism, not a fixed entity- what goes up must come down and vice versa. I smile just as wide no matter my current size because I’m proud of what this body has seen and done and represented… So my weight loss isn’t a triumph and it also isn’t some sign I’ve finally given in to the voices of trolls. Because my body belongs to ME–at every phase, in every iteration, and whatever I’m doing with it, I’m not handing in my feminist card to anyone.”

Girls‘ sixth and final season is currently airing Sundays at 10 p.m. ET on HBO. Tune in to Wednesday’s episode of The Ellen DeGeneres Show for Dunham’s full interview. Check local listings for showtimes in your area. 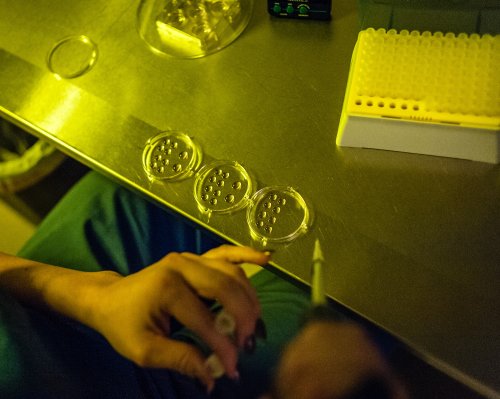 Debunking 5 Common Myths About Freezing Your Eggs
Next Up: Editor's Pick