For President Trump, the blows kept coming at a congressional hearing Monday.

First, FBI Director James Comey told the House Intelligence Committee that his agency is investigating links between the President’s campaign and Russia’s interference in the November election.

It was the first time the FBI director publicly confirmed the investigation into ties between Trump associates and Russian interference.

Comey then contradicted several statements by the White House, including the president’s incendiary claim that former President Obama had “tapped” Trump’s phone.

For the president — who has personally praised Comey — the hearing was the latest setback to his fledgling Administration. Comey’s statements are sure to fan the swirling controversy about President Trump’s ties to Russia continue to distract from the Republicans’ agenda.

“One of the things we radiate to the world is the importance of our wonderful, often messy, but free and fair democratic system and the elections that undergird it,” Comey said in the Capitol Hill hearing. “When there’s an effort by a foreign nation state to mess with that, to destroy that, to corrupt that, it is very, very serious.”

“It threatens what is America,” he continued. “And if any Americans are part of that effort, its a very serious matter.”

The President is reeling from controversies over his various misstatements, a historically low approval rating, and disagreements within his party over how to proceed with repealing the Affordable Care Act.

Comey’s testimony ensures that the controversy over Trump’s connections to Russia will continue to dog his tenure as president and slow down the President’s efforts in Congress.

“There is a big gray cloud that you have put over people who have very important work to do,” House Intelligence Committee Chair Devin Nunes, a California Republican, said to Comey. “The longer this hangs out here, the bigger the cloud is.”

Comey declined to tell members of Congress publicly whether the FBI had discovered proof of any collusion between Trump associates and Russia. And he demurred when asked to comment on the specifics of the investigation.

It was not only Comey’s confirmation of the investigation into Trump’s associates that tripped up the White House.

In a rare public disagreement with the President, Comey contradicted Trump’s extraordinary claim that President Obama wiretapped his phone, saying the FBI had “no evidence” of it.

“With respect to the President’s tweets about alleged wiretapping directed at him by the prior Administration, I have no information that supports those tweets and we have looked carefully inside the FBI,” Comey said. “The Department of Justice has asked me to share with you that the answer is the same for the Department of Justice and all its components.”

And Comey said explicitly that Vladimir Putin wanted Clinton to lose the election, and Trump to win. “The hatred for Mrs. Clinton [among Russian officials] was all the way along,” Comey said. “When Mr. Trump became the nominee there was some sense that it would be great if he could win, it would be great if we could help him, but we need to hurt her no matter what.”

Little new information was unearthed during Monday’s hearing before the Intelligence Committee; there have been numerous press reports in recent months citing anonymous officials about investigations into Trump. Comey is restricted in how much he can say publicly, and his announcement Monday confirming the investigation into Russian interference and Trump’s connections to the Russians was a break from the usual protocol.

It is unusual for the director of the FBI to publicly disagree with the president on core issues of national importance. As the country’s chief law enforcement officer, Comey’s words carry a weight that will only increase the public attention to Trump’s connections with Russia and lead to further questions about whether Trump’s allies assisted in Russia’s interference in the election.

Democrats have panned Comey for resurfacing questions about Hillary Clinton’s private email server shortly before the election, something they see as having tipped things in Trump’s favor. Still, the FBI director is respected in Washington and seen as an independent voice.

In fact, Trump publicly complimented Comey after he sent a letter to Congress notifying members he was continuing an investigation into Clinton. “What he did brought back his reputation,” Trump said on the campaign trail in late October. “It took a lot of guts.”

The public friction between Comey and Trump’s statements further entangle the Administration, which is struggling to pass the Republicans’ American Health Care Act in a vote in the House of Representatives on Thursday.

In a highly unusual move that reflected the importance of the hearing, the White House moved quickly to spin the hearing and soften its blow. From the president’s Twitter account, Trump tweeted sections of the hearing that appeared to favor him, including that Comey and Rogers both told Congress Russia did not “influence” the electoral process.

But Comey and Rogers had both pointedly refused to comment on the question.

As the hearing approached its conclusion after four hours, Democratic Rep. Jim Himes of Connecticut asked Comey whether President Trump had correctly characterized what he had said, and the FBI director said no.

“We’ve offered no opinion, have no view, have no information on potential impact because it’s never something that we looked at,” Comey said.

It was yet another blow to the White House. 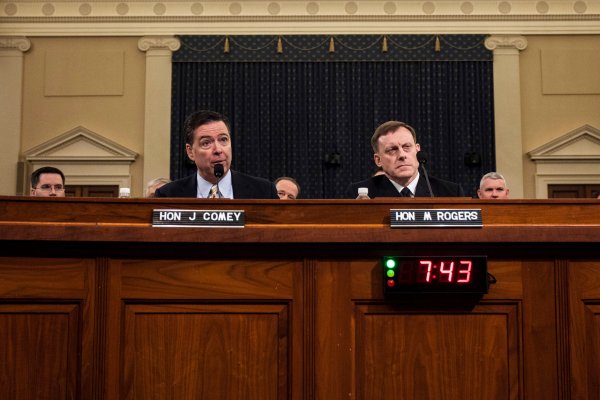