FBI Director James Comey refused to answer questions from Congress about a longtime President Trump associate Monday, but he argued that people shouldn’t “draw any conclusions” from that.

Speaking at a hearing of a House intelligence committee, Comey said that because it is an ongoing investigation on a counterintelligence matter, there were certain topics he simply could not address.

“Please don’t draw any conclusions from the fact that I may not be able to comment on certain topics,” he said. “I know speculating is part of human nature, but it really isn’t fair to draw conclusions simply because I say that I can’t comment.”

Still, Comey’s refusal to answer questions about Trump associate Roger Stone, who informally advised Trump during the campaign and has been a longtime confidant, drew attention online. Stone told the Washington Times earlier this month that he had a “completely innocuous” private Twitter exchange with “Guccifer 2.0,” the hacker tied to the email leaks.

Pressed by ranking Democratic member Rep. Adam Schiff about Stone, Comey repeatedly said “That’s not something I can comment on.”

“Mr. Schiff, I’m worried we’re going to a place I don’t want to go, which is commenting on any particular person,” he said. “And so I don’t think I should comment. I’m aware of public accounts but I don’t want to talk more than that.”

While the hearing was still going on, Stone tweeted that he should be allowed to respond.

Watch the full exchange above. 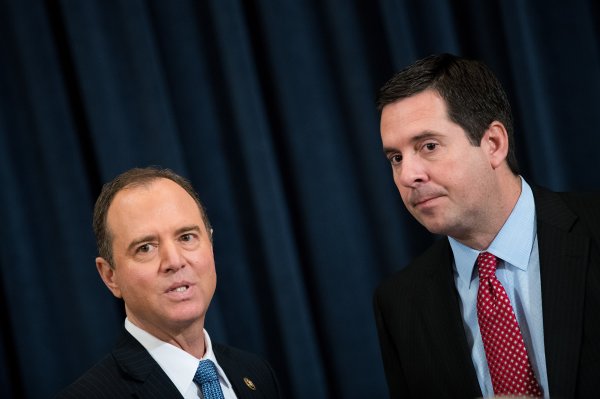 Read Rep. Adam Schiff's Opening Statement on Russian Meddling in the Election
Next Up: Editor's Pick