“They ask for equal dignity under the law. The Constitution grants them that right.” When Supreme Court Justice Anthony Kennedy wrote these words in his opinion in Obergefell v. Hodges, they not only rang true as the reason why marriage equality should be the law of the land — they also echoed prior rulings from his career. From 1996’s Romer v. Evans to 2003’s Lawrence v. Texas to 2013’s United States v. Windsor, Justice Kennedy has sought to recognize the fundamental dignity of all people.

Together, these cases in which he cast crucial votes have helped ensure that LGBTQ people are entitled to equal protections under the law, to love the people we love and, when it’s time, marry them. They have also bestowed the legitimacy long denied by our government and our society writ large. The Obergefell ruling said that I — a realtor from Ohio hoping simply to be listed on my husband’s death certificate — and every other same-sex couple seeking to marry were equal to everyone else. The Supreme Court’s decision allowed me to show the world that John Arthur was loved and that he did not die alone.

Knowing that we have constitutionally protected rights has helped many LGBTQ people to come out to live their full lives, openly and honestly. They feel safer in doing so, because they know our nation’s highest court has begun to see them as equal members of our great nation.

But this could have very easily not been the case. Had it not been for the thorough hearing given to nominee Robert Bork in 1987, revealing his extremist views on civil rights issues such as women’s health and the scope of the First Amendment, Justice Kennedy may have never had the chance to make those legal decisions that made our nation a little more equal. Those four court cases could have been decided very differently — and equal dignity may not exist as it does today. Very likely, the opinion of the court in the four cases that allowed for people to be viewed as deserving of equal dignity under the law could have been decided very differently. My husband could have never received the respect and dignity he deserved in death — and so many loving LGBTQ people would continue to live in fear because they would not be able to express love to one another, raise a child with them, or show that love through marriage.

Today, we must be as cautious as we were in 1987. As during the Bork hearings, we must again demand that the next justice appointed to the Supreme Court of the United States continue to uphold our Constitution — including equal protections for LGBTQ people under the law. Donald Trump, in nominating Neil Gorsuch, noted his desire to pick a justice in the mold of Antonin Scalia. That should send chills down the spine of everyone who cares about equality and civil rights.

President Donald Trump’s nomination for the Supreme Court, Neil Gorsuch, can’t be entrusted with this most essential responsibility. Throughout his career, Gorsuch has been critical of the court decisions that say the Constitution protects individual choice in matters of intimacy — a critical argument for protecting LGBTQ rights and many others. In his 2004 Oxford University dissertation, he argued that same-sex couples did not have a constitutionally protected right to marry like everyone else. The following year, in a 2005 article for National Review, he reduced marriage equality to a “social agenda” put forward by “American liberals.” In 2015, Gorsuch joined rulings against transgender women in Druley v. Patton and Kastl v. Maricopa County Community College District, one who was denied consistent access to hormone therapy and another who was denied access to the women’s restroom. In doing so, he failed to recognize their fundamental dignity in the way that Justice Kennedy sought to in our struggle for marriage equality.

Gorsuch’s Senate confirmation hearings this week will be a crucial test for the LGBTQ community. The outcome will determine the future of our equality, as well as women’s health, the rights of religious minorities, worker’s rights and the rights of immigrants and refugees escaping prejudice and seeking a better life.

Gorsuch’s record of rulings and statements on civil rights, due process and equal protection are alarming and disqualifying. We cannot afford a justice who will only uphold the rights of some Americans. 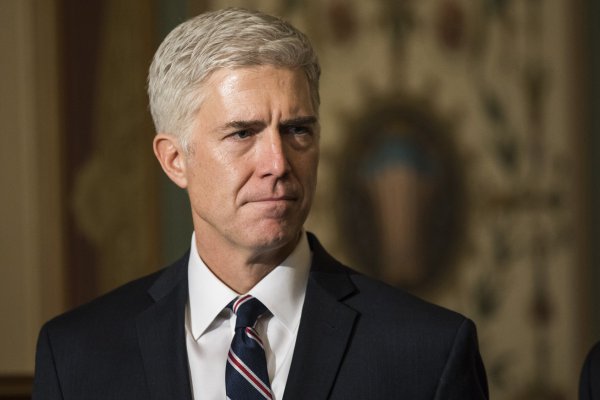 Democrats Prepare Lines of Attack on Neil Gorsuch
Next Up: Editor's Pick