In an interview published this weekend, Zayn Malik got real with The Sunday Times Style, opening up about everything from his struggles with anxiety and an eating disorder to his adorable relationship with Gigi Hadid—right down to the special nicknames they have for each other.

“I call her Gee, she calls me Zee,” Malik revealed, “There’s some other nicknames too, but I’ll keep those private.” (We found out last week, thanks to Gigi’s video interview of “Zee” that the two are also wont to call each other “baby.” He also spoke about a foiled plot he cooked up to surprise his beloved while she was in Paris for Fashion Week. “She didn’t know I was coming,” he said. “I went up to the suite to knock on the door…But my number had changed to European on her phone, so it wasn’t much of a surprise in the end. She played along with it, though.”

On a more serious note, in the same sit-down, Zayn confirmed he’s in a much better place emotionally than when he parted ways with One Direction in 2015. “I now have no problem with anxiety,” Malik explained. “It was something I was dealing with in the band.”

The singer’s public candor about his mental health issues has clearly helped a lot of fans to face their own demons. “People saw strength in that, and they didn’t seem to expect it from a guy, but they expect it from a female, which to me is crazy. We’re all human. People are often afraid to admit difficulties, but I don’t believe that there should be a struggle with anything that’s the truth.” 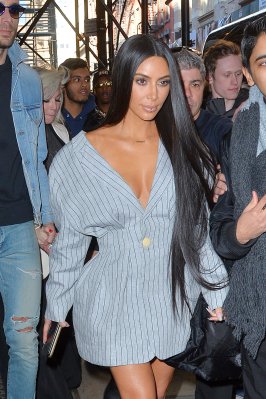 Kim Kardashian: 'I Took a Tragic Horrific Experience and Did Not Let It Diminish Me’
Next Up: Editor's Pick