Neil Gorsuch Has a Record of Protecting Religious Minorities

As the nation meets Judge Neil Gorsuch, our newest Supreme Court nominee, all eyes are on his most famous case: Hobby Lobby. In it, Judge Gorsuch stood up for a family that faced massive government fines unless they violated their religious beliefs. Critics will say the decision took religious freedom too far; supporters will say it was just right. But with partisan emotions running high, many will miss the biggest story of all: Hobby Lobby was a huge win for people of all faiths — especially religious minorities.

If you’re not familiar with Hobby Lobby, it began with the Green family — devout Christians who started their family business in their garage and have always run it on Christian principles. They close on Sundays, pay high wages and give all employees generous health benefits, including free coverage for sixteen different kinds of contraception.

But in 2012, the government threatened the Greens with multi-million-dollar fines unless they also began paying for four drugs and devices that potentially take a human life. When the Greens refused to violate their conscience, they ended up in court.

The Greens relied on a federal civil rights law, the Religious Freedom Restoration Act, which says that if the government penalizes people for practicing their faith, it must have an extremely strong justification for doing so.

Gorsuch ruled for the Greens, concluding that “crippling penalties… running as high as $475 million per year” would force the Greens to choose between “exercising their faith or saving their business,” and that the government had other ways of increasing access to contraception without penalizing the Greens. His ruling was vindicated by the Supreme Court.

The first person to recognize the decision’s importance for all faiths — minority ones in particular — was none other than Gorsuch himself. Writing in Hobby Lobby, he said, “The [law] doesn’t just apply to protect popular religious beliefs: it does perhaps its most important work in protecting unpopular religious beliefs, vindicating this nation’s long-held aspiration to serve as a refuge of religious tolerance.”

And that is precisely what Hobby Lobby has done.

Consider just three of my clients. Abdul Muhammad is a Muslim prisoner whose faith requires him to grow a beard. Although the prison warden allowed prisoners to grow beards for medical reasons, it refused to allow Muhammad to grow a beard for religious reasons. So Muhammad was forced to go to court. Before Hobby Lobby, he lost — twice. But after Hobby Lobby, he won unanimously at the Supreme Court, which cited Hobby Lobby no less than ten times.

Similarly, Robert Soto is a Native American feather dancer who uses eagle feathers in his religious practices. In 2006, an undercover agent raided his powwow, confiscated his feathers and threatened him with prosecution under the Bald and Golden Eagle Protection Act, a law repeatedly invoked to punish Native Americans unjustly. But in 2014, relying on Hobby Lobby, a court ruled in favor of Soto — the first victory of its kind, and a victory directly attributable to Hobby Lobby.

Finally, Simmer Singh is a decorated Army Captain who is also a devoted Sikh. As a Sikh, Captain Singh must wear a turban, keep his hair unshorn, and grow a beard. But when he enrolled at West Point, he was given a terrible choice: shave his hair and beard or give up his seat at the Academy. Forced to choose between his faith and his country, he chose his country, committing to reclaim the practice of his faith at the earliest opportunity. After Hobby Lobby, Captain Singh requested permission to regrow his hair and beard. Relying on Hobby Lobby, a court ruled in his favor, and the Army relented — eliminating a ban that had prevented Sikhs from serving our country for three decades.

Nor are these decisions anomalies. Relying on the same legal principles at issue in Hobby Lobby, Judge Gorsuch himself has protected Native Americans and Muslims who faced needless restrictions on their religious practices in prison.

So as the nation meets Judge Gorsuch, pay close attention to the full significance of his decision in Hobby Lobby. It was a landmark victory not just for a Christian family but also for a Muslim prisoner, a Native American feather dancer and a Sikh soldier. It was, in short, a victory for people of all faiths. Confirming Judge Gorsuch would be, too. 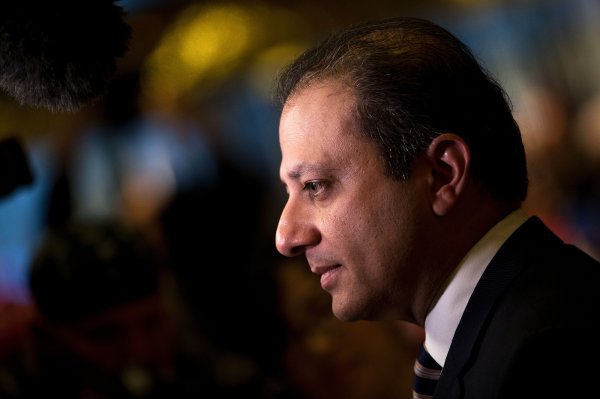 Preet Bharara Fired After Refusing Order to Resign
Next Up: Editor's Pick