Angelina Jolie is teaming up with the head of the Church of England.

The actress and humanitarian met with the Archbishop of Canterbury, Justin Welby, at Lambeth Palace in London on Thursday, where the two discussed issues surrounding sexual violence, the refugee crisis and South Sudan.

Jolie met with the archbishop in her capacity as a special envoy for the United Nations High Commissioner for Refugees. She was appointed to the post in 2012.

The actress and archbishop have worked together before, and met in 2015 at the opening of the Center for Peace and Security at the London School of Economics, where she spoke to religious leaders from around the world about ending sexual violence as a weapon of war.

“The role of the U.N. Secretary General’s Special Envoy on Refugees, Angelina Jolie Pitt, is one that has been extraordinary,” Welby said of Jolie at the time. “What she said just now sums up so beautifully the issues we are facing, and puts it so precisely in terms of the challenge that there is. It’s wonderful that she has committed her time, her energy, and has taken great personal risks in order to be able to speak authentically as to what she’s done.”

Earlier in the month, Jolie gave a lecture at the London School of Economics’ Centre for Women, Peace and Security, the same place where Jolie, as a visiting professor, will start teaching a master’s course in September on the same subject.

Later in the day, she and her son Maddox, 15, were spotted enjoying a private tour of Buckingham Palace.

Jolie has been overseas commemorating the fifth anniversary of the Preventing Sexual Violence Initiative (PSVI) she helped launch in 2012. She has also been promoting the Time to Act initiative to hold sexual offenders accountable for their war crimes. 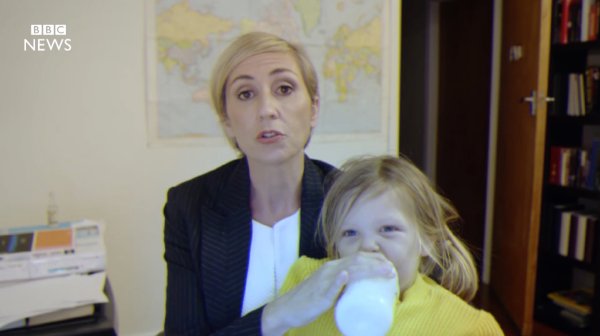 Watch a ‘Working Mom’ Satirize the BBC Interview Crash
Next Up: Editor's Pick