Imagine you were recently promoted at work. You now command a higher salary, lead more people and control more of the organization’s resources. As such, you have more influence over strategy, more authority to hire and fire and more responsibility for your team’s outcomes.

As you undertake your new role, however, you are also faced with evidence of an unethical business practice that plagues your organization. This practice is harmful, potentially embarrassing at best and possibly illegal at worst. In your new, more powerful position, would you be more or less likely to stop it than in your previous role?

This situation is hardly unheard of and might even be common. Leaders often set goals but delegate responsibility for how they are achieved, providing leeway for unethical practices to creep in. Leaders also inherit business practices from their predecessors and gain visibility only as they achieve higher rank in the hierarchy. Unethical practices can become routine and taken for granted when embedded in the organization’s structures and processes.

Consider the salespeople at Wells Fargo who were reaching their goals by opening fake accounts, the engineers at Volkswagen who installed software to cheat on emissions tests or the traders at the hedge fund SAC who were using inside information to make investment decisions. In each of these situations, unethical practices emerged on the front line, and higher-ups failed to stop those practices.

In recent research, we asked: Why do powerful people so often fail to stop unethical practices such as these, even after learning of them?

After all, plenty of psychological theories say that individuals in a position of power are situated to respond well to such practices.

After a promotion, people are particularly motivated to ensure the long-term success of the business, and unethical practices might put that success at risk. People in power also command the necessary authority and influence to intervene. They are often seen as more personally responsible when ethical lapses are exposed by whistle-blowers or the press. So you might expect a promotion to increase the likelihood that you would stop such practices in your group or organization.

However, our research recently published in Organizational Behavior and Human Decision Processes suggests the reverse is true: Holding higher rank makes it less likely someone will object to an unethical act. We call this behavior “principled dissent.”

Principled dissent is an effort to protest or change a morally objectionable practice. It challenges the status quo.

For instance, when Susan Fowler at Uber protested the refusal to provide jackets to women engineers, she was expressing principled dissent.

This is often the first step toward correcting ethical failures in organizations. It is typically less costly for the organization than alternative forms of correction, such as political pressure from external parties or free market discipline.

For example, as reluctant as some Uber executives might have been to respond respectfully to Fowler’s claims, they probably are finding the public outcry generated by her blog post and the related New York Times article more painful. Worse yet could be free market discipline, whereby unethical practices lead to the company’s demise over the long term.

To learn more, we conducted a study in which we randomly assigned participants to hold a high- or low-ranking position in a group, or assigned them to a control condition where they had no information about their rank in a group. We then gave participants an ethical dilemma to discuss, asking them to decide whether to lie to another group in a way that would benefit their own team financially but harm the other one.

A key element of our study was that before participants were asked what to do they learned that four of the other five members in their group were apparently willing to lie for monetary gain. We wanted to know whether participants would then openly disagree with this supposed consensus (which we concocted). That is, would they recommend telling the truth even if it goes against what their peers preferred?

We found that almost 40 percent of participants in the low-rank and control conditions disagreed with the group’s dishonest decision. In other words, a sizable number of those people went against the grain and engaged in principled dissent.

However, a paltry 14 percent of participants in the high-rank condition did the same. Very few people who were given high rank were willing to disagree with their group’s unethical choice.

We wondered: Did holding high rank corrupt people somehow? That is, did high-ranking participants simply prefer lying to honesty?

The answer was no. Holding high rank led people to accept the group’s preference more readily, regardless of whether that preference was ethical or not. We included another condition in that study in which participants were told that the rest of their group wanted to be honest, even if it incurred some monetary cost to their group. In these conditions, high-ranking participants were still less likely to go against the grain than participants in low-ranking or control conditions.

We also explored the impact of organizational rank on principled dissent in a study of over 11,000 randomly selected government employees. In that study, holding higher rank was again associated with less principled dissent — specifically reporting illegal or wasteful practices — even after we statistically accounted for a variety of factors such as tenure in the organization, education, knowledge of rules about retaliation for reporting unethical practices and other demographic variables.

This study thus suggested that the patterns we observed in the laboratory extend to the real world, when unethical practices are real and have more severe consequences.

Although the failure to stop an unethical practice is often attributed to character problems such as greed, sexism or the relentless pursuit of self-interest, our explanation is subtler.

According to our studies, ethical failures like these can also stem from a psychological factor endemic to very successful teams: identification with the group or organization. Identification is a feeling of oneness with the group. When you identify highly with a group or organization, you define yourself in terms of your membership in it. When asked, “Who are you?” your answer will reflect a category (e.g., you might refer to yourself as a man, a Texan, a Yankees fan, an environmentalist, a Christian). You focus on the traits that you and other group members share, rather than on personal traits that distinguish you.

We found that holding higher rank increases identification. People in high-ranking positions feel more connected to their group or organization and value their membership in it to a greater degree than do lower-ranking people. This trend has benefits for the group, as strong identifiers cooperate more readily and contribute more to the group’s goals.

But stronger identification has an ethical cost: It makes it more difficult to perceive ethical problems within the group.

For example, people who identify strongly with a group are more likely to consider unethical acts committed by its members to be more ethical than someone with a weaker connection to it. So one reason high-ranking people might fail to stop unethical practices is that their stronger identification blinds them: They don’t see the act as unethical in the first place. They fail to step in and intervene because they do not see any need to do so.

In another study, we made it easy or difficult for participants to identify highly with their other group members. We randomly assigned them to positions of high or low rank, and then tasked their group with making a decision based on a popular business ethics case study. Participants were led to believe that their group wanted to price-gouge hospitals in the aftermath of a hurricane. High-ranking participants engaged in principled dissent less frequently than low-ranking participants only when they identified strongly with the group.

There is some good news.

Earlier research found that people who strongly identify with their group are more likely to engage in principled dissent than weak identifiers — as long as they recognize a problem as unethical. That is, while these strong identifiers may have trouble recognizing that certain activities are unethical, when they do realize it, they’re more likely to intervene and try to put a stop to the bad behavior.

This shows just how important it is to instill a strong moral compass in future business leaders, and for companies to find ways for them to maintain it as they climb the corporate ladder.

The other option is to make it easier for managers to leverage the ethical perspectives of lower-ranking employees who, according to our research, have a clearer eye for spotting wrongdoing. In other words, a more democratic approach to management could offer an ethical advantage that could be more profitable in the long run. 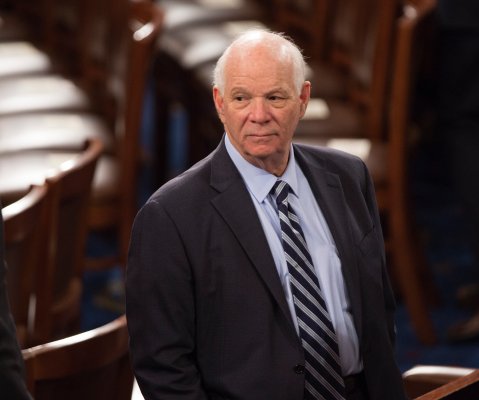 Sen. Cardin: President Trump's Budget Makes Us Less Safe In Every Way
Next Up: Editor's Pick