The reflection of U.S. President Donald Trump is seen in a mirror while he speaks during the Friends of Ireland Luncheon at the U.S. Capitol in Washington, D.C., on March 16, 2017.
Olivier Douliery—Bloomberg via Getty Images
Ideas
By Samuel Breidbart and Vinay Nayak

Breidbart and Nayak are students at Yale Law School.

It’s time for Donald Trump to do something he’s pretty much never done before: say he’s sorry.

In light of President Trump’s second major legal defeat in as many months, he may be left with no choice. Without an apology, President Trump’s revised travel ban, which was put on hold by two federal district courts on Wednesday, seems doomed to the same legal fate as his first one.

The issue has to do with the Establishment Clause of the Constitution, which prevents government officials from intentionally disfavoring any religion. If courts determine that an objective observer would see a law’s primary purpose as an effort to single out one religious group, they will deem it a likely violation of the Establishment Clause.

A Virginia judge found that the first travel ban had an impermissible religious purpose, citing many of Trump’s own statements — from his initial call for a “total and complete shutdown of Muslims entering the United States,” to his later statements about giving priority to Christian refugees. His surrogates corroborated that targeting Muslims was the underlying purpose of the law, with Rudy Giuliani going so far as to say that the President ordered him to transform the Muslim ban into a secular form.

But since the Trump Administration rolled out a new Executive Order with different terms and provisions, shouldn’t judges let it stand?

Not if they think the President’s purpose is fundamentally the same.

In the past, the U.S. Supreme Court has made it very difficult for laws passed with an impermissible religious purpose to be reissued legally. For example, in McCreary County v. ACLU, the Court invalidated a city’s public display of the Ten Commandments even though city officials added secular documents to the display when a lawsuit was filed against them.

In that case, the Court determined that the law was changed as a “litigating position,” and warned that an “implausible claim that governmental purpose has changed should not carry the day in a court of law any more than in a head with common sense.”

In yesterday’s decisions, the courts saw President Trump’s order as a similarly transparent attempt to respond to an adverse legal ruling. In fact, Trump’s own surrogates, whose impressive citation counts continue to rise, have said as much. For example, Stephen Miller stated on Fox News that the law only contained “minor technical changes” and promised that it would yield “the same basic policy outcome.” Moreover, the Trump Administration’s national security rationale for the order has been undercut by a leaked Department of Homeland Security (DHS) memo stating that country of citizenship is an unreliable indicator of terrorist behavior in the United States.

Unless a higher court disagrees that the first ban was intended to disfavor Muslims, Trump has a narrow path to proving that the second ban had a different intention.

One way for Trump to demonstrate his purpose has shifted is to show that he had a true change of heart. He would have to somehow convince a court that even if the first travel ban appeared to be motivated by a desire to broadly target a single religious group, the second one was primarily motivated by genuine national security concerns. This could prove difficult to do without some kind of apology for his previous statements, including those advocating a blanket ban on Muslim immigration and declaring his belief that “Islam hates us.” If Trump did acknowledge that consultation with national security experts helped him realize that his misguided call for a ban on all Muslims from entering the United States was a mistake based on his own religious prejudice, the order’s stated purpose of pausing immigration from regions with hard-to-vet nationals might have more credibility.

Don’t hold your breath. As the President once said, “I fully think apologizing’s a great thing, but you have to be wrong.” Instead of issuing an apology, the President responded to the ruling by referencing the second ban as a “watered-down” version of its predecessor, and then stating that he still preferred the original order. Though it could be in his legal interest, it’s hard to believe that the President will reverse course any time soon, or that a court would take him seriously if he were to do so.

Over a month since his grand declaration, President Trump’s own words have proven to be prophetic after all: “SEE YOU IN COURT!” The only problem: The President may not like what he sees. 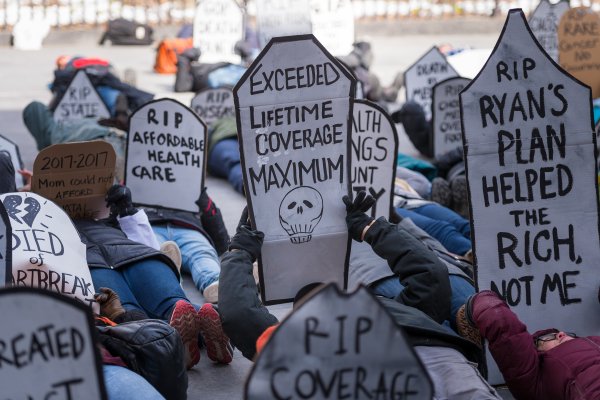 Petition to Strip Congress of Health Subsidies Nears 500,000
Next Up: Editor's Pick