Three conservative Republicans voted against the leading plan to replace Obamacare on Thursday, a sign of increasing dissent within the GOP as the party struggles to repeal President Obama’s signature health care law.

In the House of Representatives Budget Committee, Reps. Mark Sanford of South Carolina, David Brat of Virginia and Gary Palmer of Alabama — all members of the conservative House Freedom Caucus — joined Democrats in voting against the American Health Care Act put forward by House Speaker Paul Ryan and endorsed by President Trump.

The three conservatives opposition marks a new level of open defiance to the Republican bill, which is opposed by every single Democrat and an increasing number of Republicans.

Still, even with the Republican defections, the GOP bill was able to pass through the Budget Committee by a close 19-17 margin on its way to the Rules Committee, after which it will head to the House floor for a vote.

“This is the conservative health care vision that we’ve been talking about for years,” Rep. Diane Black of Tennessee, chair of the budget committee, said in an attempt to rally Republicans on the committee. “To my Republican colleagues who have doubts today, I encourage you: don’t cut off discussions. Stay in the discussions and help us with this proposal.”

Ryan’s bill to replace Obamacare has struck a difficult impasse. Conservatives believe the law does not do enough to roll back regulations on health insurers, and say that it creates another federal entitlement in the form of the tax credit to help individuals pay their health care premiums. They also want to see Obamacare’s expansion in the Medicaid program freeze earlier than 2020, the year the current bill sets out.

Meanwhile, moderates are worried about the loss of subsidies for their constituents and $800 billion cuts in Medicaid coverage.

A tally from CNN showed that 11 House Republicans have said outright that they will vote against the current bill, while nine others have indicated they will likely oppose it. Ryan can’t lose more than 21 Republicans and still get the bill through the House.

In an attempt to steer the controversial bill through the House, Republican leadership has noted the progress the bill has made in committees. The replacement bill “has gone through two committees already,” said House Majority Leader Kevin McCarthy of California to Fox News. “Not one Republican has voted against it. Energy and Commerce and Ways and Means is a microcosm of the Conference.”

But support in the committees will not necessarily translate to support for the bill when it comes up to vote on the floor of the House, when the bill comes up for a vote. Several lawmakers who voted for the bill in earlier committee markups are now questioning the bill.

A stark forecast by the Congressional Budget Office released Monday indicated that 24 million people will lose health insurance by 2024 under the Republican plan, a figure that is too large for many in the party to stomach.

Rep. Leonard Lance, Republican of New Jersey, supported the bill in Energy and Commerce Committee, but said he would vote against the bill on the floor, citing a score from the Congressional Budget Office that found it could cost 14 million their insurance next year. “The CBO score has modified the dynamic,” Lance told CNN.

Rep. Pete Roskam of Illinois supported the bill in the Ways and Means Committee to repeal Obamacare’s taxes, but has recently been expressing doubts about the Republican plan’s Medicaid freeze.

Many Republicans have said they see the bill as an uncomfortable hodge-podge of ideas that doesn’t go far enough in repealing Obamacare, or in covering lower-income Americans. “We ended up with a technocratic crap sandwich,” said one lawmaker. 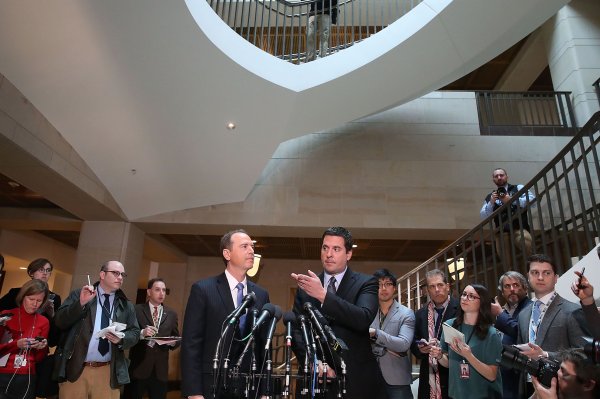 Intel Chair: No Evidence of Wiretapping Allegations
Next Up: Editor's Pick