Why President Trump Is Struggling to Staff His Government

Joined by his Cabinet, Trump signed an Executive Order on March 13 that reorganizes the Executive Branch.
Michael Reynolds—Getty Images
By Philip Elliott

When a nor’easter barreled toward Washington in mid-March, Donald Trump suggested to German Chancellor Angela Merkel that she postpone her upcoming visit to the White House. The inclement weather also bought the President’s understaffed Administration a bit more time to prepare for a Merkel drop-by. Almost two months into the job, Trump still has no assistant secretary for European affairs or envoy to the E.U. at the State Department, he lacks undersecretaries for international issues at the Commerce and Treasury departments, and he is still looking for a policy chief at the Pentagon.

The President has moved slowly to assemble his Administration. Trump often excoriates Senate Democrats for holding up more than two dozen appointees awaiting confirmation, including three Cabinet Secretaries. But Trump has yet to nominate 505 of the 553 key Executive Branch positions, according to a tally maintained by the Washington Post and the Partnership for Public Service. Those roles range from the patent chief at Commerce to a science adviser at the White House. At the State Department, where four top career diplomats have departed, just six of 119 jobs requiring Senate confirmation had been announced by the time Secretary Rex Tillerson left for his first major swing through Asia, on March 14. When the Administration asked for the resignation of all Obama-era U.S. attorneys on March 10, it added another 46 jobs to the long list of open positions.

The personnel shortage is more of a governing philosophy than a glitch. One of Trump’s goals is to slash the size of the federal bureaucracy, which he is accomplishing in part through attrition among civil servants whom the Administration doesn’t trust. Some government agencies are “no longer relevant,” press secretary Sean Spicer told reporters on March 13. At offices like the Environmental Protection Agency, Trump has chosen chiefs who have opposed the core functions of the department they now lead. The President’s plan to scale back what his chief strategist Steve Bannon calls the “administrative state” will be “quite controversial, particularly when we get into things like the EPA,” Bannon told TIME in an interview. “But the President believes very strongly you cannot unleash the real animal spirits of the American economy just in tax cuts.”

Where the Trump team is plugging holes, the White House is relying on political loyalists. Sam Clovis, a conservative radio host who advised Trump’s campaign in Iowa, was asked to help guide the Department of Agriculture until the President’s pick for Secretary can be confirmed. Curtis Ellis, a columnist who wrote for websites that peddled the false conspiracy theory that Barack Obama was born in Kenya, was named a top aide at the Labor Department, which is also awaiting a Secretary to be confirmed. And Matt Mowers, a GOP political hand who helped steer the Trump campaign’s get-out-the-vote operation, found himself with a seat on the storied (but now largely empty) seventh floor of the State Department.

Trump, who still nurses grudges against his Republican critics, has been especially keen to stack his White House with allies. Some West Wing staffers have unusual résumés as a result. Former Breitbart News editor Sebastian Gorka has a gig with the National Security Council. Omarosa Manigault, one of the original villains on The Apprentice, is promoting White House outreach. And former Trump golf-club caddie Dan Scavino Jr. manages the President’s social-media footprint.

The late-winter storm that delayed Merkel’s visit wound up largely skirting the capital. But it did provide another reminder of just how slowly Trump is staffing up. The President has yet to tap someone to run the National Oceanic and Atmospheric Administration, which tracks weather systems from its perch at Commerce. Nor has he nominated someone to lead the Federal Emergency Management Agency, which leads the response to natural disasters from the Department of Homeland Security. Or a permanent chief for the Office of Personnel Management, the government’s HR department, which told thousands of federal workers that they wouldn’t be getting a snow day after all. 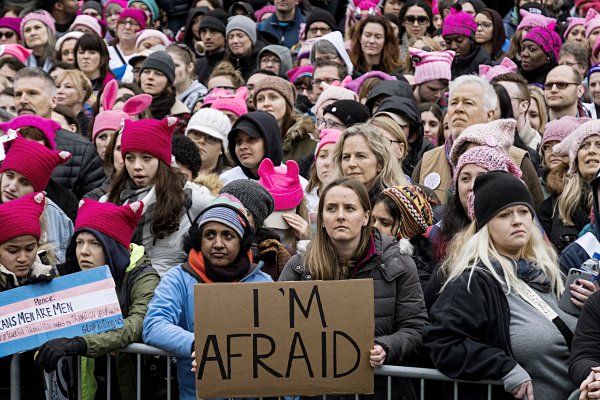 The Emotional Divide of Trump’s Presidency
Next Up: Editor's Pick