These Two Drafts Show How the Balfour Declaration Evolved

On the list of documents that changed history, the Balfour Declaration — the 1917 statement of official British support for the creation of a Jewish state in Palestine — has surely earned a place.

So it’s no wonder that the declaration is one of the focal points of a new exhibit at the National Museum of American Jewish History (NMAJH), which takes a deep dive into a strange, history-shaking year. The show — 1917: How One Year Changed the World, which opens Friday and will run through July 16 before traveling to the American Jewish Historical Society in New York City — also examines the U.S. entry into World War I and the Bolshevik Revolution in Russia.

The final text of the Balfour Declaration, issued by Foreign Secretary Arthur James Balfour to Lord Rothschild on behalf of the British government on Nov. 2, 1917, was just one simple sentence: “His Majesty’s Government view with favour the establishment in Palestine of a national home for the Jewish people, and will use their best endeavours to facilitate the achievement of this object, it being clearly understood that nothing shall be done which may prejudice the civil and religious rights of existing non-Jewish communities in Palestine, or the rights and political status enjoyed by Jews in any other country.”

But, as explained by Josh Perelman, NMAJH’s Chief Curator and Director of Exhibitions & Collections, even that single sentence was the product of a long process — part of which involved Lord Balfour requesting help from the leaders of the British Zionist movement to craft the language. On July 17, 1917, the Zionist Political Committee met at the Imperial Hotel in London to do just that.

Two drafts to come out of that meeting, from the collection of attendee Leon Simon, are included in the NMAJH exhibition. One draft is handwritten by Simon on hotel stationery and the other is a typed draft with his notes.

The version on hotel stationery plainly stated that His Majesty accepted the principle of the National Home of the Jewish People in Palestine, and that he would endeavor for the achievement of that goal. The typed version expanded on that idea. Some of the text in the version the group gave to Balfour — for example, a mention that the Zionist Organization would be consulted moving forward — was deleted in the final version, while Balfour added an extra level of explanation about what the statement of support meant for other residents of the area and for Jews elsewhere in the world.

“Together, [the drafts] are able to show the iteration of process that led up to the official statement we know today,” Perelman says. “You can see them working through the vernacular.” 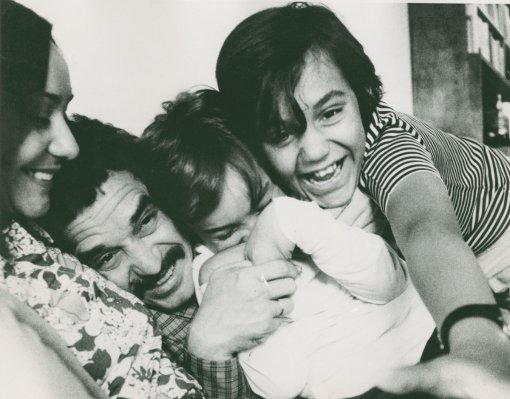 Gabriel García Márquez’s Life in 100 Pictures
Next Up: Editor's Pick