The Man on the Bed

The typical photo depicting the people surviving war it was not. People widely circulated this haunting March photo of Abu Omar, 70, and his pipe as he listened to his record player from his seat on his broken bed amid the rubble in Aleppo where he insisted on staying. As for the portrait's spread, the photographer Joseph Eid will tell you “this picture touches the soul of the human being.”
Joseph Eid—AFP/Getty Images
By Andrew Katz

It looks like a film set. The disheveled bed, the rubble on the floor, the tattered yellow window coverings—everything so perfectly and terribly broken. And then there is the man and his pipe, listening to his record player. This is Aleppo.

The man, identified as Mohammed Mohiedin Anis, and also known as Abu Omar, is a collector of vintage cars. This photograph from March 9 has since gone viral, widely shared as a haunting counterpart to the typical images of children bearing the brunt of this war, about to enter its seventh year.

This is not the first time we’ve met Abu Omar. In early 2016 Karam al-Masri of Agence France-Presse filed a moving story about him, when he lived in the rebel-held neighborhood of al-Shaar and had 30 cars to his name. But as the war devolved, shifting control last year from the rebels to the government after a brutal battle, so did the collection.

AFP’s Beirut Bureau Chief Sammy Ketz and photographer Joseph Eid recently returned to Aleppo to feel out the toll of war. They planned to follow up on al-Masri’s story about the man with the vintage cars. Once they arrived to the neighborhood, local residents led them to his home. Ketz reported that a third of the man’s vehicles have been stolen or destroyed.

“We knocked on the big green steel gate and he opened it for us,” Eid tells TIME. Observing the situation this man was in, he adds, “we found ourselves obliged to dig deeper into his life.”

It was during a tour of the house that they came across the vinyl player. “He told us he still uses it, and a lot these days because it is mechanical and doesn’t need electricity to operate,” Eid says. “He proposed to play some of his vinyl discs but said that he can’t listen to music without smoking his pipe.”

And so they waited while Abu Omar lit his pipe, turned the crank and sat to enjoy the music on his broken bed, in his ruined room, in his destroyed home, in his obliterated city, in his fractured country. “He played one of his favorite songs,” Eid adds, an old Arabic tune by Syrian singer Mohamed Dia al-Din. “He is so attached to his past and to the things that he always cherished and loved, and without them he will lose his identity,” Eid says. “That’s why he insists on staying and getting back his life again.”

It’s a scene he says he will never forget. “Whenever I feel or will feel any kind of despair or surrender to [life’s] problems and obstacles,” Eid says, “I will always [recall] the image of Abu Omar smoking his pipe while sitting on his rubble covered broken bed and listening to his favorite music.”

As for why he thinks the picture is being shared widely, Eid says maybe it’s because “people are fed up of violence.” Numbness and carelessness have set in, he suggests, allowing them to turn their eyes away. To him, “this picture touches the soul of the human being.” 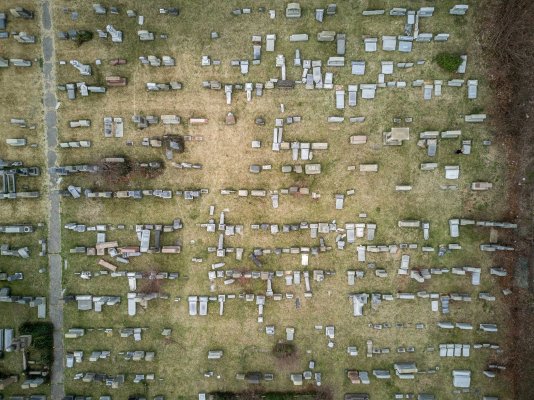 This Drone Photo Shows the Extent of Vandalism at a Jewish Cemetery
Next Up: Editor's Pick