Patricia Arquette Will Fight With U.N. for Equal Pay

Patricia Arquette is joining forces with U.N. Women to unveil what she hopes will be a powerful new weapon in the fight against gender inequality.

The outspoken actress and activist gathered with leaders from the private, public and political sectors in the General Assembly Hall of the United Nations headquarters on Monday to launch the Equal Pay Platform of Champions. The new platform is part of a broader Global Equal Pay Coalition, which advocates for secure laws on equal pay, better parental leave and childcare policies, and minimum living wage. On a global average, women only make 77 cents for every dollar earned by men for work of equal value.

On a global average, women only make 77 cents for every dollar earned by men for work of equal value.

“We had a lot of interesting discussions,” Arquette, who made headlines and brought new attention to the gender pay gap with her famous 2015 Oscar speech, tells PEOPLE. “[We heard] from labor forces like the garment workers, who are trying to get a true living wage, because 80% of garment workers are women earning a minimum wage that’s not possible to live on.”

She also listened to delegates from Switzerland discussing mandatory gender audits and analysis of companies, which revealed that “half of those companies surveyed were paying women less,” says the actress.

Iceland, which is instituting a law to ensure equal pay, was of particular interest to the Arquette. “That will be the first example we’ve seen where, after years of trying to close the gap, they might actually be able to accomplish it much more quickly [with legislation],” she explains. “I look forward to seeing how that goes. Hopefully, that will make a drastic difference and they will set a leadership example for the rest of the world.”

Arquette also hopes to raise awareness that “the lowest wage earners are often women.” She adds, “Women who are among the most-educated also have a big pay gap, but it’s the women who are surviving on minimum wage, it’s just impossible [for them]. We have to have a real living wage, so that’s another thing that would be great, if a leader country came to the table and established a true living wage.”

U.N. Women Executive Director Phumzile Mlambo-Ngcuka, who’s worked closely with Arquette on the project, tells PEOPLE she hopes the program will speed up an already complicated process. “The issue of unequal pay for men and women is something that’s been organized around for over a hundred years, so it’s quite depressing that we’re still here,” she says with a laugh. “I don’t think we can underestimate how sticky this problem is. Progress is being made too slowly, but the opportunity we have these two weeks is to bring attention to it in a way that hasn’t been done in a long time.”

With initiatives like the Equal Pay Platform of Champions, Mlambo-Ngcukaan hopes to form an “alliance of people coming together to say, ‘Enough, we’re committing to change.’ The current state of things is totally unacceptable: Women continue to earn 23% less than men, as a global average, which is outrageous. That means that women work unpaid for almost a quarter of the year compared to men, it’s indefensible. So all these people coming out today — like Patricia, people in the private sector, states, U.N. agencies — are all putting their voices together collectively and saying, ‘We need to make a change.’”

At the event, Arquette will kick off a new U.N. Women online campaign, #StopTheRobbery, aimed at raising awareness of the need to support women’s economic empowerment as part of achieving full gender equality. #StopTheRobbery invites people to spread the word by sharing tweets in support of gender equality, of which 23% of characters will be blacked-out.

On Tuesday, the Commission on the Status of Women will interrupt its work with a 3-minute suspension of its proceedings. It will be done at 4:10 pm, when there is 23% of the work-day left, to recognize the gender pay gap.

“We need to appreciate the work women do on the job and at home, and understand that they’re vital parts of society and are contributing all the time,” adds Arquette. 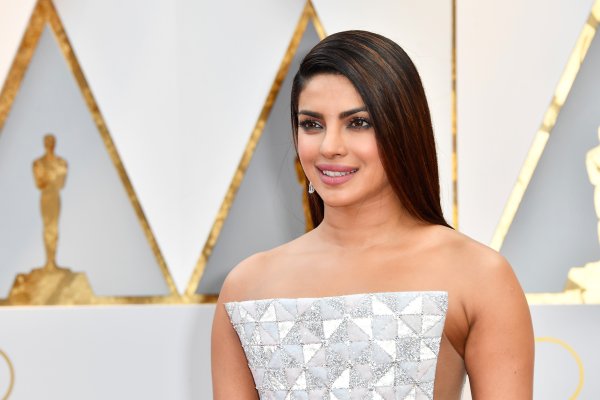 Priyanka Chopra Doesn't Believe in Looking for Love
Next Up: Editor's Pick