Supreme Court nominee Neil Gorsuch is openly skeptical of a long-standing judicial doctrine that empowers federal regulators to take action on everything from the environment to public health and safety.

Adopted by the high court in a 1984 case involving the Chevron oil company, the so-called Chevron doctrine says that when the law is ambiguous, judges should defer to federal agencies’ interpretations of their own powers. Part of the idea is to give regulators the flexibility they need to adapt to changing circumstances, with Congress and the President reining them in when they overstep.

But Gorsuch views it differently. In a concurring opinion last summer, he wrote that the doctrine empowers bureaucrats to “swallow huge amounts of core judicial and legislative power” and “concentrate federal power” in a way that the framers of the Constitution would have disagreed with.

If Gorsuch’s views were to prevail at the Supreme Court, federal agencies would be put on a shorter leash, requiring more explicit permission before tackling such issues as climate change and employment regulations. And Gorsuch could arrive at a court increasingly sympathetic to his view, says Leonard Leo, a conservative legal scholar who advised Trump on his Supreme Court nomination.

“Judge Gorsuch’s opinions in the Chevron area do reflect the trajectory of the [Supreme] Court’s jurisprudence,” Leo says, “which is to say, a growing concern about overreach by the administrative state and a lack of separation of powers.”

Liberal advocacy group People for the American Way lists Gorsuch’s views on Chevron as one of the top three reasons people should oppose his nomination.

“Gorsuch has gone even farther than [late Justice Antonin] Scalia in embracing an extreme and far-reaching legal theory that, if put into practice, would severely restrict the federal government’s ability to effectively address national problems,” reads a blog post on the site. “As the federal government’s ability to address workplace safety, workers’ rights, environmental problems, investment abuse, consumer safety, and any number of other issues sharply diminishes, the power of Big Business and Wall Street to impose their will on every American would be greatly enhanced.”

Gorsuch is sure to be grilled about this by Democrats when he faces the Senate Judiciary Committee for his confirmation hearing this week. Two Senate aides confirmed they expect questions about Chevron. And Gorsuch knows it will come up, too. In his questionnaire submitted to the committee, he was asked about the most significant cases he’s ever presided over. He listed Gutierrez-Brizuela v. Lynch, the case where he wrote his concurring opinion about Chevron, at the very top.

(In a fun quirk of history, Gorsuch’s mother was the head of the Environmental Protection Agency in the early 1980s and the defendant in the lower court decision that resulted in the Chevron ruling at the Supreme Court.)

Some conservatives reject the Chevron argument put forth by People for the American way and other liberal groups.

“They’re bootstrapping off of this debate about Chevron and trying to draw parallels between his skepticism about Chevron and the so-called progressive agenda to protect ‘the little guy,'” says Leo. “They’re engaging in self-contradiction. They want to be able to make the argument that [Gorsuch] is anti-worker, anti-consumer, anti-environment because he expresses skepticism about the Chevron doctrine, but at the same time, they want to say that he’s a rubber stamp for the Trump Administration and the executive branch. You can’t have it both ways.”

But the split on Chevron views has never fallen along simple liberal-conservative lines.

“It depends on whose ox is being gored,” says Thomas O. McGarity, an administrative law expert and professor at the University of Texas at Austin law school. Chevron was created under a conservative government and was originally used to facilitate deregulation; under liberal governments, it was wielded for greater oversight and regulation. Conservative late Justice Antonin Scalia, for example, who Gorsuch stands to replace, once supported Chevron, arguing it allows the government to function properly. In a speech at Duke Law School in 1989, Scalia said that one of Chevron’s “major advantages” is “to permit needed flexibility, and appropriate political participation, in the administrative process.”

McGarity argues that another switch could be coming, because environmental groups, many of whom would have supported greater power for the EPA in the past, might reconsider their position in this political climate. “If they’re really thinking through this particular issue, they may not want a judge who’s going to defer to a [Scott] Pruitt-held EPA as he starts undoing things that the Obama Administration did,” McGarity explains.

In the current political landscape, Gorsuch’s view on Chevron fits broadly with a goal of the Trump Administration: to roll back regulatory powers across the government, something Trump adviser Steve Bannon calls the “deconstruction of the administrative state.”

“Article I is the Congress, Article II is the President. Article III are the courts. And then there’s this administrative state, combining all three,” White House counsel Don McGahn told TIME in an exclusive interview. “They make the law, they enforce the law, and then they decide who violates the law, destroying the constitutional separation of powers that was designed to protect individual liberty.”

In Gorsuch’s famous Chevron opinion, he referred to the doctrine as “an elephant in the room” and wrote that “the time has come to face the behemoth.” He should get another chance wrestle with it this week. 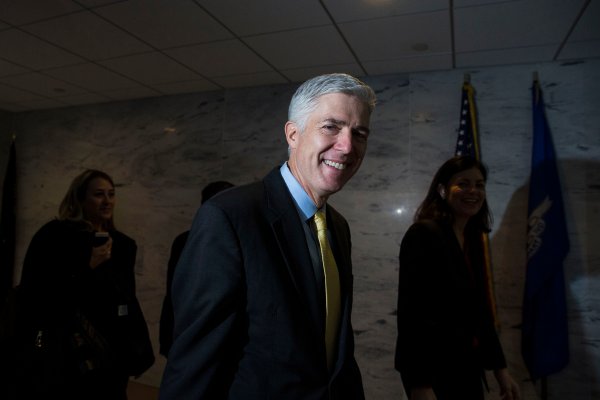 See Photos of Supreme Court Nominee Neil Gorsuch From Throughout His Life
Next Up: Editor's Pick