Late Night host Seth Meyers got back to delivering his nightly satire as he unpacked the debate surrounding the new proposed healthcare plan on his “A Closer Look” segment on Monday. After playing a clip of Rep. Jason Chaffetz comparing buying healthcare to buying technology, Meyers had a very dry response.

“Yeah, Americans need to cool it with the gadgets,” he deadpanned about the Utah Republican. “They always want the hot new iPhone, or Pacemaker, or crutches when a good ol’ stick will do.”

He also discussed an unusual comment that had popped up on the congressional floor: the question of who’s responsible for paying for prenatal care. Rep. John Shimkus had pushed back against the idea that men should be on the line for that particular responsibility.

“Yeah, why should men pay for prenatal care?” Meyers asked, mocking the Illinois Republican. “For that matter, why should women? Prenatal care is for the fetuses. The fetuses should pay for it! They’ll just have to give up their precious iPhones,” Meyers joked.

To see how Meyers lampooned Rep. Jason T. Smith of Missouri—who asked why we don’t levy a tax on the sun for causing skin cancer—you’ll have to watch the full clip, above. 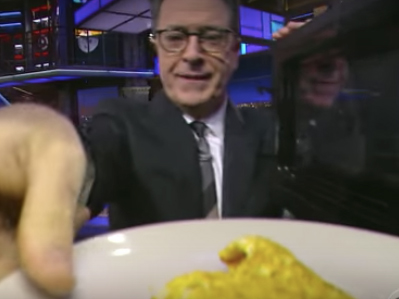