A woman walks outside the Ferguson Market and Liquor on March 13, 2017 in Ferguson, Missouri as tensions visit the city following video footage of slain 18 year-old Michael Brown in a recent documentary.
Michael B. Thomas—Getty Images
By Alana Abramson

Ferguson’s key prosecutor dismissed newly-released footage showing Michael Brown allegedly engaging in a drug deal rather than a robbery as “nonsense,” and claims editing was involved.

“It was clearly an attempt to distort this and to turn it into something it isn’t,” St. Louis County Prosecuting Attorney Bob McCulloch said at a news conference Monday.

A new documentary, Stranger Fruit, shown this weekend at the South by Southwest festival, includes footage of Michael Brown in the convenience store he allegedly robbed. Filmmaker Jason Pollock told the New York Times he believes the footage, which shows Brown entering the store and taking a bag with cigarillos, beginning to walk out, then turn around and handing the bag back, shows that Brown was involved in a drug deal — thereby challenging the account that he was robbing the store.

The new footage sparked a protest of about 100 people outside the convenience store, according to the St. Louis Post dispatch.

According to CNN, McCulloch says Pollock’s video in the documentary only shows half the story and does not include the clerks putting the drinks and cigarillos back.

“There was certainly an attempt to barter for these goods,” McCulloch said, according to CNN. “There was no transaction between Mr. Brown and the store employees.”

The attorney for the convenience store, Jay Kanzler, is also disputing the footage in the documentary. 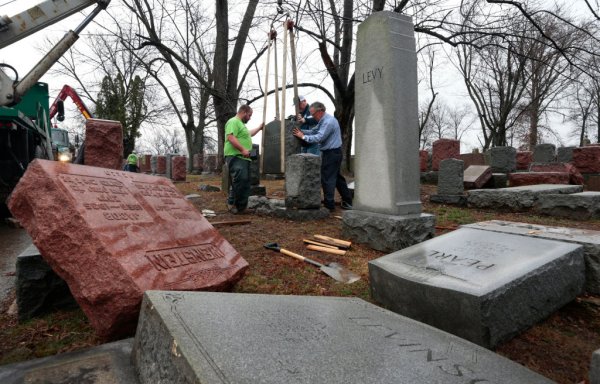 Muslims Support Jewish Families After Vandalism
Next Up: Editor's Pick