White House counsel Don McGahn has assembled a team of elite lawyers with the stated goal of leading Trump Administration efforts to roll back regulatory powers across the U.S. government.

The plan of attack, run from the second floor of the West Wing, is designed to take apart what Trump advisor Stephen Bannon has called “the Administrative State,” the collection of federal agencies that exists to carry out laws passed by Congress and authorities granted to the President. Trump aides argue that these bureaucracies have become an independent federal power sources that sometimes works against the intent of the U.S. Congress and U.S. Constitution.

“Article I is the Congress, Article II is the President. Article III are the courts. And then there’s this administrative state, combining all three,” McGahn told TIME in an exclusive interview. “They make the law, they enforce the law, and then they decide who violates the law, destroying the constitutional separation of powers that was designed to protect individual liberty.”

One White House aide described the group of lawyers hired by McGahn as a conservative answer to “Nader’s Raiders,” a small group of liberal activists organized by Ralph Nader in the 1960s and 1970s, who successfully fought for greater federal regulation of consumer goods like automobiles and food.

McGahn said he had specifically chosen his staff because of their expertise in working inside federal law. “They understand the regulatory agencies, several are appellate lawyers who have spent their careers fighting regulatory and government overreach, or worked on Capitol Hill conducting oversight,” McGahn said in an interview with TIME. “A number of people in the office actually have sued the government over regulatory over reach, and have won.”

The group, which reports to McGahn, includes Greg Katsas, a deputy White House counsel, who ran the Department of Justice’s Civil Division during the Bush administration and challenged the Affordable Care Act at the Supreme Court while in private practice. Stacy Cline Amin, an associate counsel, was the Chief Counsel to the U.S. Senate Committee on Health, Education, Labor and Pensions. Associate Counsel John Bash has argued 10 cases before the Supreme Court, clerked for Justice Antonin Scalia and D.C. Circuit Judge Brett Kavanaugh, a hero of conservatives in the fight against the regulatory system.

McGahn is no stranger to the struggle himself. A former chairman of the Federal Election Commission and an advocate against some campaign financial legislation, he led the charge in trying to rein in federal regulation of campaigns. “When I hear ‘deregulation,’ all that means is returning the power to decide policy back to those elected by the people, whether it is the House, the Senate, or the President,” McGahn said.

One priority, McGahn said, will be working toward “giving full life” to the 2012 Supreme Court case Sackett vs. EPA. That case expanded the ability of Americans to challenge regulatory orders in court. McGahn said the administration would work to support efforts by citizens to object to regulations that affect them. “We are looking for these various bureaucracies to be a little more fair,” McGahn said. “Too often agencies impose penalties without basic due process. Before imposing a penalty or negative ruling, those accused should get an opportunity to be heard. It is fundamentally unfair to do otherwise.”

The larger goal of rolling back agency regulatory powers also played a role in the selection of Supreme Court nominee Judge Neil Gorsuch, who has proposed abandoning the so-called Chevron doctrine—which grants federal agencies the first crack at interpreting laws that apply to them before the courts. Emerging from a 1984 Supreme Court ruling, the doctrine stands to be a key flashpoint in his upcoming confirmation hearings. In his responses to a questionnaire from the Senate Judiciary Committee, Gorsuch listed his concurrence in the case, Gutierrez-Brizuela v. Lynch, as the first case when asked for significant decisions he had worked on. In that decision, Gorsuch said the Chevron doctrine “was more than a little difficult to square with the Constitution of the framers’ design.”

“My opinion noted that the Administrative Procedure Act vests the courts with the power and duty to interpret statutory provisions, that deferring to an agency’s interpretation may be in tension with Congress’s statutory directive, and that this practice may raise due process (fair notice) and separation of powers concerns,” Gorsuch wrote to the committee.

In some ways the deregulatory stance of the Trump administration is simply conventional conservative practice, directed more by Republican Party thinking than the president’s beliefs. Trump has spoken only generally about his desire to dismantle “job-killing” regulations, but his team is nothing if not specific.

But the president’s top strategist, Bannon, has elevated the issue in recent weeks, including during a recent address to conservative activists. “The administrative state is the FEC, the FTC, the FCC, FERC, SEC all that alphabet,“ Bannon told TIME in an interview last week. “All this stuff in environment or EEOC, just on and on and on, coupled with the bureaucracies that do it.”

Trump’s first budget, set to be released this week, will include dramatic cuts to non-defense discretionary spending, including major regulatory bodies like the Environmental Protection Agency.

Already the administration has rolled back or delayed scores of Obama-era regulations. Two of the first four bills signed by the presidents rolled back a pair of controversial rules. Presidential orders swiped away the red tape for the construction of the Keystone XL and Dakota Access pipelines. And the White House Counsel’s office and the Justice Department are reviewing pending litigation in regulatory cases to determine whether to reverse the government’s positions.

“It’s early but the efforts there have been serious first steps,” said Philip Wallach a senior fellow in Governance Studies at the Brookings Institution and an expert on the administrative state. “A lot of it will depend on execution,” he added.

White House aides acknowledge the work may be messy, and argue Trump believes the shakeup is necessary to meet his economic growth targets. “It’ll be quite controversial, particularly when we get into things like the EPA,” Bannon told TIME. “But the President believes very strongly you cannot unleash the real animal spirits of the American economy just in tax cuts.”

The notion of the administrative state is nothing new. Ronald Reagan sought to rein it in during his eight years, but struggled to do more than just contain its growth. But the fight against its growth became a crusade during the Obama years, particularly in conservative legal circles as they watched the former president relied on regulatory action to circumvent an obstructionist Congress.

Trump has yet to nominate or fill hundreds of key posts across the government that will determine if he can bend the bureaucracy to his will. Trump has also delayed in making some selections for independent regulatory agencies.

“It’s very hard to overcome the bureaucratic inertia,” Wallach said. “It will take a lot of professionalism to do a lot of this regulatory work and a lot of effort to deal with the bureaucracy.” 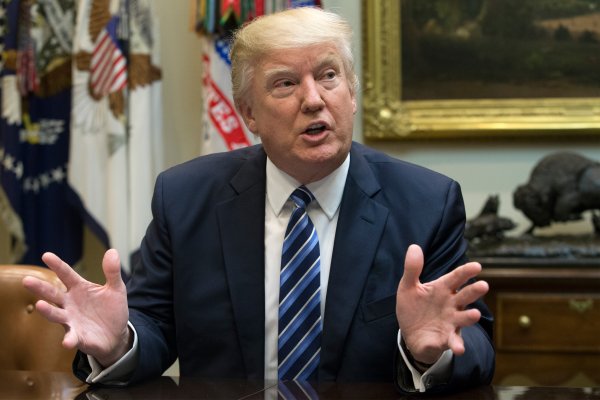 President Trump Made 3 Big Promises on Health Care. The Budget Office Just Undercut All of Them
Next Up: Editor's Pick