President Trump said Republicans are putting themselves in a “very bad position” by repealing the Affordable Care Act, which has been a signature Republican campaign promise since 2010.

“The Republicans, frankly, are putting themselves in a very bad position — I tell this to [Health and Human Services Secretary] Tom Price all the time — by repealing Obamacare,” Trump said during a listening session on the Affordable Care Act at the White House on Monday.

Trump said that by repealing the law, Republicans will keep people from seeing the “truly devastating effects of Obamacare.”

“They’re not gonna see the devastation. In ’17 and ’18 and ’19, it’ll be gone by then. Whether we do it or not, it’ll be imploded off the map,” the president said of the Affordable Care Act, though he later said waiting to repeal the law would be “the wrong thing for our citizens.”

Trump, White House aides, and Republican allies in Congress are in full-blown sales-pitch mode trying to promote the GOP plan to repeal and replace President Obama’s signature legislative achievement. Trump on Monday was critical of the media’s portrayal of the Affordable Care Act, saying publications are “making it look so wonderful.”

The president said there was a similar reaction to President Obama. Trump said people “didn’t like him so much” when he was in office, but loved him when he was on his way out the door.

“The fact is Obamacare is a disaster, and by — and I say this to the Republicans all the time — by repealing it, by getting rid of it, by ending it, everyone’s gonna say, ‘Oh, it used to be so great.’ But it wasn’t great,” Trump said. 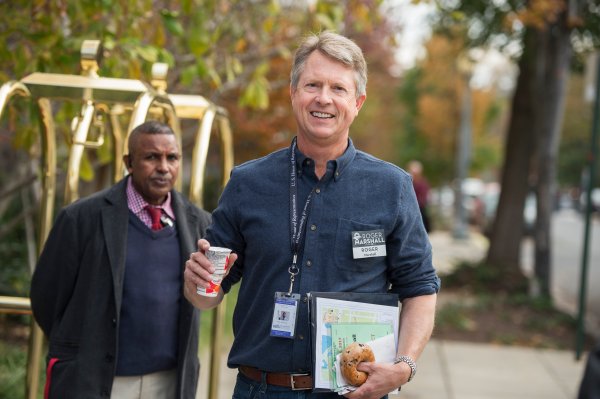