The U.S. Troop Presence in Syria Is at Its Highest Ever. But How Long Are They on the Ground for and Why?

A convoy of U.S. forces armored vehicles drives near the village of Yalanli, on the western outskirts of the northern Syrian city of Manbij on March 5, 2017
Delil Souleiman—AFP/Getty Images
By Jared Malsin / Istanbul

The Trump Administration is intensifying America’s involvement in the ground war in Syria, having announced on March 9 that it is sending 400 more troops to join the fight against ISIS there.

The new deployment of Army Rangers and a U.S. Marine artillery unit raises fresh questions about the scope and timeline of the U.S. mission in Syria, where the number of American troops is now approaching a high of around a thousand (Washington has not disclosed an exact number). The U.S. is also sending another 2,500 troops to a staging base in Kuwait, awaiting possible deployment to Iraq or Syria.

Recent comments from U.S. officials suggest that the military is contemplating a deployment in Syria that extends far beyond the defeat of ISIS as a conventional armed force. In his testimony to the Senate Armed Services Committee on March 9, Army General Joseph Votel, who leads the U.S. Central Command, said additional forces may be needed in the future to help with “stability and other aspects of the operations.” The Pentagon is also considering lifting a formal cap of roughly 500 U.S. troops permitted on the ground in Syria, a limitation imposed by former President Barack Obama, according to the Washington Post.

The near doubling of the U.S. military deployment in eastern Syria, along with Votel’s comments, suggest a shift toward a more open-ended commitment of forces to Syria, echoing the prolonged U.S. military presence in Iraq or Afghanistan. But the escalation is also prompting calls to define the objectives of the mission over the long term in order to avoid a costly occupation both in terms of lives and resources.

“Inevitably there will be American casualties. And there needs to be an executable plan for post-conflict governance that keeps the Assad regime — the main reason for violent extremism in Syria — out of areas liberated from ISIS,” says Fred Hof, a former special adviser to the Obama Administration on Syria.

“U.S. forces should not segue into an occupation role, but it requires careful planning and intensive diplomacy to avoid sliding into something unintended,” he also says in an email to TIME.

U.S. forces are in Syria with the ostensible intention of helping Kurdish-dominated Syrian militias retake the city of Raqqa, the de facto capital of the Islamic State. U.S. Marines are already deployed near Raqqa, firing artillery in support of that campaign. The current approach mirrors the U.S.-backed fight against the Islamic State (ISIS) in Iraq, where American air power, special operations forces, and the U.S. Army and Marines play a supporting role for a coalition of tens of thousands of Iraqi troops. More than 5,000 U.S. personnel are currently deployed in Iraq fighting in support of Iraqi government soldiers and police, allied militia groups, and Iraqi Kurdish forces.

The current U.S. approach injects U.S. troops into a volatile and multisided political conflict. In Syria, the Americans are fighting alongside controversial Kurdish-dominated militias known as the Syrian Democratic Forces (SDF). Those troops include a heavy presence of militias known as the People’s Protection Units (YPG), whose affiliated forces control a large chunk of northern and eastern Syria. The group is a secular, revolutionary Kurdish organization with deep dies to Kurdish insurgents also fighting the Turkish state and responsible for bombings and other attacks inside Turkey. As a result, Turkey’s government regards the YPG as a terrorist organization and an existential threat comparable to ISIS.

U.S. support for the Kurdish militias infuriates Turkish officials. It also alienates some of Syria’s Arab citizens, who could view Kurdish militias as an occupying force. Human-rights groups have documented the group razing villages and forcing Arab Syrians to flee. U.S. officials envision sending the Arab-let units of the broader SDF coalition into Raqqa, but Turkish officials and Syrian opposition activists are not convinced this is a sound plan.

“They are not a good choice to liberate Raqqa,” said Abdalaziz Alhamza, the co-founder and spokesperson of Raqqa Is Being Slaughtered Silently (an acclaimed activist group that documents ISIS abuses), referring to the Kurdish militias, in an interview in 2016. He told TIME, “There’s no civilians now in Tel Abyad because this group started to kidnap, to kill, to arrest, to do the same thing, to do human-rights violations. And ISIS uses that to say to civilians in Raqqa, ‘This group will do the same thing they did in Tel Abyad.’”

So volatile is the situation in northern Syria that U.S. forces are currently deployed in the town of Manbij, in order to separate Turkish and pro-Kurdish forces, both of whom allied with the U.S. in different ways, while Russian and Syrian government troops are deployed nearby, underscoring the risk of a wider regional conflagration. U.S. Senator John McCain warned during the hearing on Thursday with Votel that American officials had not absorbed the depth of Turkish objections to the role of the YPG in the anti-ISIS campaign, saying, “I think there’s a possibility of an impending conflict between Turkey and the Kurds.”

In the multipolar war in Syria, Raqqa represents a prize for nearly every major power represented in the conflict. Turkish figures have floated the possibility of using a Turkish-backed Syrian rebel force to take the city, as was the case in the campaign to reclaim the ISIS-held city of al-Bab, near Aleppo. Syrian President Bashar Assad claimed last week that his own Iranian and Russian-backed forces are approaching the ISIS stronghold. For Washington, none of those options look palatable; an American-backed campaign by the SDF to capture Raqqa presents itself as the least bad scenario.

“There really are no other options other than let ISIS manage that area. And so that’s the dilemma,” says Nicholas Heras, an analyst at the Center for a New American Security. “If you don’t want to let ISIS manage a shrunken would-be caliphate, you either let Assad and IRGC militias control it, or you have a U.S.-backed force that has a U.S. and or partner presence.”

Regardless, the increase in the U.S. military deployment in Syria is raising concerns that the Trump Administration’s aggressive new approach will lead to a quagmire.

“Once you escalate like this, once you commit further and further, then I think it becomes incumbent on you to actually figure out where this is headed,” says Sam Heller, a Beirut-based Syria analyst with the Century Foundation. “There are limited aims that the U.S. can realistically achieve in Syria in the fight against ISIS, and they justify limited means. They do not justify an unlimited commitment.” 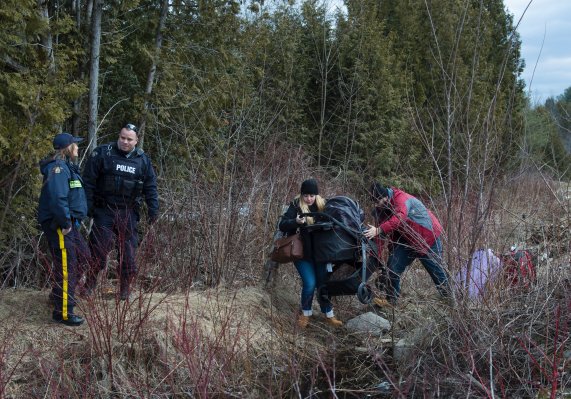 Canada Is Expecting Even More Refugees to Come From the U.S
Next Up: Editor's Pick