Springtime’s Cherry Blossoms Have a Dark Side

Cherry blossoms at the Tidal Basin in Washington, DC.
Karen Bleier—Getty Images
By Olivia B. Waxman

One thing both Democrats and Republicans can agree on in Washington, D.C., is that cherry blossoms are a sight to see in the springtime. But they are more than just pretty to look at. Their role in Japanese history has been complicated at times — and that long past can also provide a key warning about the future.

First, the past: Cherry blossoms are important enough in Japanese culture for observers to have been noting the date of their peak bloom for centuries. Many Japanese people have made a point to gather or throw parties under cherry trees when they’re fully flowered — a moment that is watched for carefully, as the flowers tend to bloom all at once and then disappear within about a week. The cherry blossoms of Kyoto are among the oldest examples of this phenomenon.

“Cherry blossoms have become a symbol of something that’s evanescent and fleeting,” Bruce L. Batten, an expert on cherry blossoms and climate change in Japanese history says, echoing a principle that’s aligned with Buddhist thought: “Enjoy it now because they’re going to be gone.”

That idea helped cherry blossoms become seen as symbols for the military, as personnel were told it was an honor to “die like beautiful falling cherry petals” during the period of imperial expansion in Japan that started in the late 19th century and extended through World War II, argues Emiko Ohnuki-Tierney, anthropologist at the University of Wisconsin and author of Kamikaze, Cherry Blossoms, and Nationalisms: The Militarization of Aesthetics in Japanese History. Many cherry trees were planted in Japan and also in its colonies during that period, and the use of the image as a military insignia helped spread the association between Japan and the cherry blossom.

At the same time, the Yasukuni Shrine, established in 1869, was where cherry blossoms were planted to console the souls of soldiers. And after World War II, cherry trees — which had been used as wartime symbols before — came to seen as symbols of peace.

And, because of the cultural weight borne by cherry blossoms, there is also a historical record of the timing of their blooms — which means, looking to the future, that they have also come to function as a symbol and sign of climate change.

Generally in Japan, if cherry blossoms “bloom earlier than usual, it means it was warmer than usual, and if they bloom later than usual, it means it was colder than usual,” according to Batten. “Cherry blossoms basically confirm what is known from other scientific proxies or sources — tree rings, pollen samples, corals, etc. Over the course of my 30-year career in Japan, the dates of blossoms are coming earlier every year. And not just cherries — in general, flowers are blooming earlier than they did in the past. That is unambiguous evidence that things are getting warmer.”

“The bloom schedule of the Japanese flowering cherry trees, like most plants, is phenological, meaning that the timing of their bloom is dependent on the conditions of their environment,” confirms Mike Litterst, a spokesperson for the U.S. National Park Service, which oversees Washington’s cherry trees.

Key research on this topic was conducted by Yasuyuki Aono and Shizuka Saito and published in the International Journal of Climatology and the International Journal of Biometeorology. By scanning diaries for indications of peak bloom dates, they “reconstructed a nearly continuous series of March mean temperatures based on 224 years of cherry flowering data, including 51 years of previously unused data, to clarify springtime climate changes.” Their data also suggested that there were four cold periods: 1330-1350, 1520-1550, 1670-1700, and 1825-1830.

The following numbers are one example of cherry blossoms have reached peak bloom earlier as temperatures have been getting warmer, courtesy of Takehiko Mikami, a meteorology professor emeritus at Tokyo Metropolitan University, whose calculations are based on data from Japan Meteorological Agency.

The same trend has occurred in Washington, D.C., as peak bloom has shifted early by about five days since 1921, and weather station measurements since 1946 show a temperature increase of 1.6 degrees Celsius (2.88 degrees Fahrenheit) per century.

This year, though the cherry trees in the U.S. capital were predicted to bloom in early March, a late cold snap has thrown off the bloom and killed about half of the blossoms, moving it weeks later than originally predicted. Though that weather circumstance has made it difficult to predict the peak bloom date this year, the NPS tells TIME that the expected blossoming is still likely to be noticeably earlier than the average date of April 4. 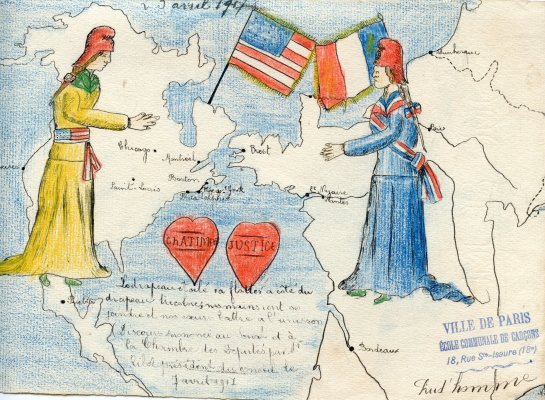 See Stirring Century-Old Artwork by French Children Reacting to World War I
Next Up: Editor's Pick