Kristen Stewart is not one to shy away from fearless hair changes, but her latest blonde buzz cut is her most daring yet.

The 26-yeary-old star debuted a platinum shaved head at the L.A. premiere of Personal Shopper on Tuesday night, but she revealed the real reason behind the drastic hair makeover on Today Thursday morning.

“I’m doing a movie in a couple weeks called Underwater and I play a mechanical engineer that’s working on an oil rig that’s on the bottom of the ocean floor,” the Personal Shopper star said. “So for me, it’s practical. I’m not going to be able to have touch ups when I have a helmet on. I must have my head!”

RELATED PHOTOS: These Female Stars All Have One Thing in Common: Beautiful Buzz Cuts

But Stewart says that if it weren’t for her upcoming movie role, she probably would still want to try out a shaved hair look eventually.

“I’ve been wanting to do this for a long time just for novel sake just because at some point in your life, you want to be able to do that,” she said as she ran her hands over her shaved hair.

So when Stewart’s director suggested the idea before filming started, she was very excited. “I was like, ‘Who told you?’ That’s a great idea! You should take credit for that.’ I was so game,” the actress said.

It’s only been two days, but Stewart still can’t stop touching her new do and is clearly embracing her latest punk-inspired look. “It feels amazing,” she added. “I just want to head bang all day!” 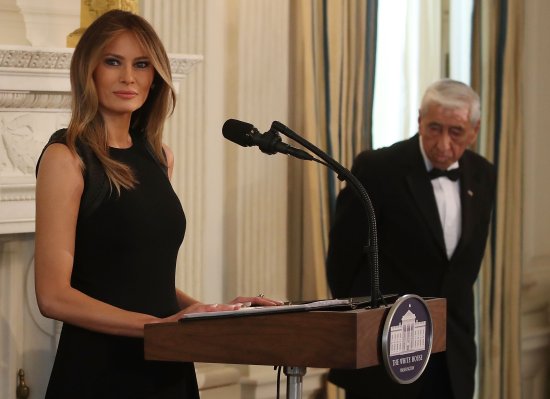 Melania Trump Is More Popular Than Her Husband
Next Up: Editor's Pick