(BRUSSELS) – The leaders of the European Union delivered a withering snub to Poland’s right-wing government on Thursday by steamrolling its objections and reappointing former Polish premier Donald Tusk to chair their summits.

Tusk’s successor as prime minister Beata Szydlo, acting on orders from her party boss and long-time Tusk adversary Jaroslaw Kaczynski, had vowed to stop him securing a second 30-month term. But the other 27 leaders wasted no time in moving to a cold-blooded vote in which she was the lone objector.

Warsaw portrayed the issue as one of fundamental principle, in which vital national interests had been ignored by a Brussels machine dominated by “German diktat”. Its crushing defeat showed how far the biggest of the ex-communist states that joined the EU after the Cold War appears isolated, even in Eastern Europe.

The row, albeit driven by Polish domestic politics, clouded attempts at the meetings in Brussels on Thursday and Friday to forge a common front as Britain prepares to deliver its formal notice that it will exit the bloc in 2019.

Kaczynski said the vote showed the EU was run by Germany and was trampling on national interests: “If the EU does not abandon this road, it will be consigned to history,” he said in Warsaw.

Hours after the vote on Tusk, Szydlo refused to sign off on the official record of summit “conclusions” — a routine roundup of endorsements and exhortations on economic, immigration and foreign policies. It was signed by the other 27, however, and EU officials said Poland’s rejection did not affect the outcome.

Szydlo had first tried to get the other leaders to postpone a decision on Tusk but found no backing. They gave her time to repeat her reasons for withholding her support, citing Tusk’s criticism from Brussels of her government’s policies – policies many in the EU see as a threat to democracy.

But Maltese Prime Minister Joseph Muscat, who holds the rotating EU chair, moved swiftly to record a 27-1 vote to reappoint the 59-year-old Tusk.

Tusk had left the room during the discussion and was clapped back in by all but Szydlo, according to people who were present. He will play a key role over the next two years in overseeing Brexit negotiations with London. Prime Minister Theresa May was attending her last summit before launching the process.

Tusk, who led a centrist government for seven years until 2014, offered an olive branch to Szydlo, telling the Council in broadcast comments that he would work with the leaders “without any exceptions – because I am committed to European unity”.

He urged Warsaw to be “reasonable” and not “burn bridges” with EU allies and said he would work to avoid its “isolation”.

The leaders will meet again on Friday, minus May, to prepare for a “unity” summit to be held in Rome on March 25, the 60th anniversary of the treaty that laid the EU’s foundation.

The row with Poland has highlighted a deepening split between eastern members reluctant to cede new-found national freedoms to Brussels and the richer western states that want to deepen EU integration in the hope it can boost prosperity and security and thus stem the rise of Brexit-inspired eurosceptics.

Talk of a “multi-speed” Europe has intensified in recent months. Germany’s Angela Merkel and other leaders say allowing willing states to pull closer together is crucial to the EU’s survival, but wary easterners fear they could be left behind.

They also pledged continued support – and possible EU and NATO membership – to Balkan states where they are worried about growing influence from Russia. 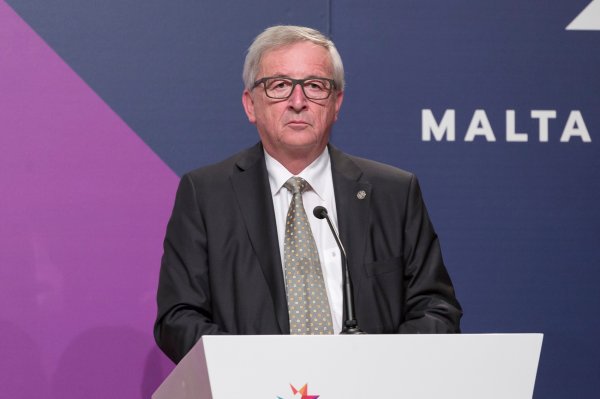 Q&A: Jean-Claude Juncker on Brexit, Russia, and Trump's 'Highly Unfriendly' Remarks on the E.U.
Next Up: Editor's Pick