Former Utah governor Jon Huntsman speaks as he announces that he will drop out of the race for the White House bid and endorse Mitt Romney on Jan. 16, 2012, in Myrtle Beach, S.C.
Joe Raedle—Getty Images
Ideas
By James Richardson
James Richardson is a former spokesman and advisor for the Republican National Committee and Governors Haley Barbour and Jon Huntsman.

The next U.S. ambassador to Russia is reportedly the very same man President Donald Trump once said “gave our country away to China” while serving as America’s top diplomat in Beijing. That tune is not much different from the Kremlin-appeasing criticisms Democrats are lobbing at the current White House, but the imminent nomination of two-time U.S. ambassador Jon Huntsman should soothe the frayed nerves of even the most hardened critics of the administration.

Consider Huntsman’s ill-fated bid for President, on which I served as spokesman. Our internal mythology maintained that the silver-haired Huntsman was something of a Republican facsimile to Barack Obama — polished, charismatic, youthful — and had the political savvy to deny his party’s next-in-line his widely expected coronation. We had it half-right, at least: he was brilliant and strikingly handsome, but the most self-sabotaging politician this side of Joe Biden.

Huntsman’s White House failings and diplomatic successes have a proximate cause, though: a pointed refusal to engage in the most base, if still shameful, mechanisms of successful retail politicking. The man won’t pander, ever.

U.S.-Russia relations are today more tattered that at any moment in the past 30 years. But if the endless coffee klatches of New Hampshire are any measure of the man, Jon Huntsman won’t be kissing the ass of Vladimir Putin any time soon. The qualities that ultimately felled Huntsman’s presidential insurgency — that almost-clinical aversion to pandering — are the same reasons he is the best candidate to serve as the U.S.’s chief envoy to Russia in the era of Donald Trump.

Huntsman had the reddest résumé of any candidate for President in the 2012 contest. He green-lighted hunting licenses for children as young as 12; he banned second-term abortions and reclassified third-term abortions as a third-degree felony; and he presided over the single-largest tax cut in Utah’s history.

But if his record in office was red, his rhetoric on the campaign trail was decidedly taupe. His moderate positions — support then for civil unions, later for same-sex marriage — commanded immoderate coverage. He avoided saber rattling and refused to engage in the politics of personal destruction that fueled the most recent presidential contest.

Reserved, knowledgeable and well-coifed, Huntsman is the anti-Trump.

Huntsman is the diplomat’s diplomat, having logged already two foreign ambassadorships under three Presidents of both parties. He’s an exceedingly well-informed and rational voice on foreign trade and military entanglements. And on a bombast scale of zero to Kanye West, he rates somewhere close to unadulterated tofu. (Indeed, his single harshest criticism of his chief primary rival, Mitt Romney, was to tag the waffling Massachusetts governor a “perfectly lubricated weather vane.” Zing!)

For all his and Trump’s sharp stylistic departures, though, the globe-trotting Huntsman pitched himself as a nationalistic, America-first candidate when running for President. He argued that Afghanistan required counterterrorism programs and not nation building, as was the practice. And he waxed poetic that the U.S. required a “rebuilding our core at home,” where our infrastructure was crumbling and schools were failing. Now, that doesn’t look as great stitched onto a wide-brimmed trucker cap. But the sentiment remains the same: Make America great and let others foremost fight for their future.

The next U.S. ambassador to Russia will assume custody of the nation’s relationship with a regime so overtly hostile to freedom that it meddled in our most sacred democratic processes. The challenges awaiting Huntsman demand a willingness to tell hard truths, no matter the political or personal consequence: that the unlawful taking of the Crimea will not be tolerated by America and her allies; cyberattacks on American institutions and elected officials will go unanswered no longer; and that America is today, as Ronald Reagan said, a “shining city upon a hill whose beacon light guides freedom-loving people everywhere.”

These are challenges worthy of Jon Huntsman. As questions of campaign subterfuge swirl, his ethics are beyond reproach. And as questions of governing experience stifle the Administration’s agenda, his experience is beyond rival.

Jon Huntsman is a lousy politician, but a great American. 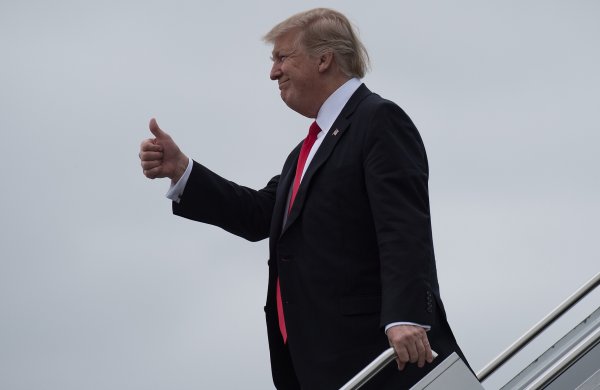 8 Keys to Understanding the Trump Administration
Next Up: Editor's Pick