From the outside, the lactation room looks like any other door in the office building, except for the sign. “Breastfeeding Is Welcome Here,” it announces in pink script.

Decorated with photos of babies and outfitted with hospital-grade breast pumps, this room at the New York City Department of Health and Mental Hygiene represents both a haven and an opportunity for moms who want to continue their jobs while pumping milk for their infants.

“It does make you feel more empowered. It makes you feel like your trajectory is intact,” says Vibhuti Arya, a professor at St. John’s University who was tenured shortly after her maternity leave and pumped milk at the department for five months. “Was it hard? Heck yeah. But I was able to do it.”

Lactation rooms like this were created around the country after President Obama signed the Affordable Care Act in 2010. The law required companies with more than 50 workers to provide adequate break time and space for certain employees to express milk at work, while also requiring insurers provide coverage for breast pumps and lactation support.

While Republicans are aiming to roll back much of the Affordable Care Act with their proposed replacement legislation, the breastfeeding support remains untouched so far. The GOP replacement bill being considered in the House of Representatives would maintain both provisions.

Women across the country have benefited from the law, though it remains a minor part of Obamacare’s impact. According to the Centers for Disease Control, four million women give birth in the United States each year, and more than 80 percent choose to breastfeed. But only a small percentage of women are pregnant and employed—just 1.6% of the U.S. labor force each year, according to the National Women’s Law Center, a figure that includes some who are not covered by the law.

“It’s a small part of the overall health care bill,” says Democratic Rep. Carolyn Maloney of New York, who helped lead the charge to put these provisions in the Affordable Care Act. “But it’s absolutely ‘huge,’ as the president would say, to nursing mothers.”

While some Republicans vowed to rip up the Affordable Care Act “root and branch,” the breastfeeding provisions show that not every part of the law is at risk. They remain untouched in the first draft of the GOP health care legislation, and they’ve had bipartisan support in the past—the workplace protections passed unanimously through a Senate committee into the ACA in 2009, and they were not repealed in the 2015 reconciliation package that the House used as a model for its new plan.

A spokesperson for the House Energy and Commerce Committee, which worked on the new bill, told TIME, “The committee has held constructive meetings with women that value this benefit and expect these services to continue to be accessible in the future.”

Seema Verma, Trump’s pick to lead Centers for Medicare and Medicaid Services, told the Senate Finance Committee in February that maternity coverage should be an optional benefit. But when asked by TIME about the federal breastfeeding protections, Sen. Orrin Hatch, Republican chairman of the committee, said, “I’m basically for it.”

Even Democratic Sen. Jeff Merkley of Oregon, who worked with Maloney to put the breastfeeding protections in the Affordable Care Act, said he’s not too worried about them being scrapped. “When you have folks who have campaigned on repealing every word of the ACA, you have to be aware that you need to pay attention,” he said. “But I don’t lose as much sleep over losing this provision.”

That could mean healthy moms and healthy babies. According to the Office on Women’s Health, breastfeeding a child lowers their risk for chronic conditions like asthma, Type 2 Diabetes and childhood leukemia. It can also lower the risk of ovarian and breast cancer in mothers, and help them lose weight after their pregnancy.

Breastfeeding rates have also gone up in recent years, according to CDC data. While those increased rates aren’t necessarily correlated with breast pump accessibility, “we can infer that having access to a pump helps women facilitate providing breast milk to her baby whenever they are separated. This affords women the freedom to be separated from their babies while lactating,” Lauren Hanley, an obstetrician, gynecologist, and breastfeeding specialist at Mass General Hospital in Boston, said. “In the U.S. in particular, since our workforce has so many women, having access to a pump, and space and time to use it, is critical,” she said. “And the ACA gives women the right and the tools to do just that.”

Aeroflow, a medical equipment provider, began distributing breast pumps for the first time shortly after the ACA took effect. Since then, it has provided pumps to “hundreds of thousands” of women, and serviced nearly 97,000 mothers in 2016 alone, Jennifer Jordan, director of mom and baby at Aeroflow, told TIME. “The pump is such an essential part of making the transition back to work or school,” Jordan said. “I struggle to imagine what would happen if it ever went back to being an expensive option.”

The current provisions are also crucial for women who only pump. Some women may not feel comfortable nursing in public, or have history of sexual abuse or violence that makes breastfeeding difficult, Hanley said. Others use a pump if their baby doesn’t take to breastfeeding, while some prefer pumping as a more accurate way to measure how much milk their child is getting. Women who have twins or triplets often opt to use a pump as well, as it helps provide milk for more than one baby. And some babies—such as those in the neonatal intensive care unit—are unable to suckle directly at the breast, meaning those mothers must use a pump.

“For years women have been told that breastfeeding is the healthiest thing we can do,” says Maloney. “Yet we keep running into barriers that keep American women from making that choice.”

Many mothers still hit those obstacles. Since 2011, the Wage and Hour Division conducted 238 investigations related to the nursing mothers provisions and found 161 violations, according to a U.S. Labor Department spokesman. A study published in the journal Women’s Health Issues in 2015 found that just 40% of women had access to both the required break time and private space– a problem likely exacerbated by the fact that the Affordable Care Act didn’t specify any way to enforce the provisions or penalty for not abiding by them.

And some businesses have pushed back against the law. In 2011, during a comment period on the law, the National Restaurant Association argued that restaurants had “very real challenges” to provide adequate space for women to express milk at work. “While some options may be available to some restaurants, short of physically altering their footprint, compliance with the space requirement, as currently written, may be impossible without great expense,” the association wrote. It did not respond to request for comment for this piece.

But now women have federal law on their side. Galen Sherwin, senior staff attorney at the Women’s Rights Project of the American Civil Liberties Union, says she has worked on about a dozen cases since the passage of the ACA in which women were denied the appropriate breastfeeding accommodations, fired or harassed. She says Obamacare makes it easier to win these cases than it was before, when many would have been filed under Title VII sex discrimination. “The benefit of the Affordable Care Act provision is that it is very clear and unequivocal about what employers are required to do,” Sherwin says. “Litigation under sex discrimination law is more difficult.” The specificity of the law also means breastfeeding women now know exactly what they’re owed. “It sets the standard pretty high, so I have expectations now when I go places,” Christine Borges says of her experience with the workplace lactation program at the New York City Department of Health. “I know that I can ask for these things and I can cite federal law.”

If the breastfeeding provisions were to be repealed in the future, as this version of the new Republican plan likely won’t pass into law, coverage for the related preventive services and workplace protections would be up to the states. (New York City, where Arya and Borges work, passed its own bill guaranteeing workplace lactation space last summer.) But some lawmakers don’t think that’s good enough. “A woman’s health care, the kind of care she gets, the kind of start in life that her children get, shouldn’t depend on your ZIP code,” says Democratic Sen. Maggie Hassan of New Hampshire, a member of the Senate Health, Education, Labor & Pensions committee.

For Arya, who has a young daughter and another girl on the way, these provisions have helped her show her children they can have it all. “Listen kid,” she says, “you can do whatever you want. Mommy tried to balance all of this.” She says she couldn’t have done it without those lactation rooms. 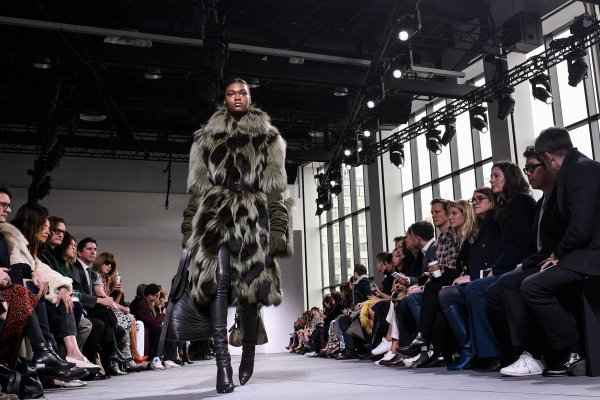 Fashion Shows This Season Were Slightly More Diverse
Next Up: Editor's Pick