Moscow Cozies Up to the Right

Bistro Bis, a swanky French joint on Capitol Hill, is a Washington institution that has hosted all sorts of political summits over the years. But the group that piled into the restaurant’s Leaders Room on the night of Feb. 1 was among the more unusual. For four hours, current and former Russian officials dined with two Republican Congressmen, a conservative magazine publisher, a longtime GOP consultant and a close friend of top White House strategist Steve Bannon.

As the murky ties between Moscow and members of Donald Trump’s campaign consumed the city outside, the group dining inside the George Hotel explored ways to strengthen the bonds between the two countries. “We have so many people who are trying to destroy the relationship between Russia and the United States,” says Representative Dana Rohrabacher of California, who attended the dinner and has visited Russia at least a half-dozen times over the past five years. “I’m trying my best to expand the amount of personal contacts we have with people who are engaged in government in Russia.”

Russia is equally keen on cultivating links to Republicans. Some of the officials who attended the dinner–including a deputy central banker and former Russian senator named Alexander Torshin, and his protégée, a young gun-rights activist named Maria Butina–have been part of a years-long campaign to build connections between Russia’s leaders and American conservatives. The crusade, which predates the rise of Trump, has garnered scant attention but achieved significant success, sparking new alliances with leading U.S. evangelicals, lawmakers and powerful interest groups like the NRA.

The outreach to Republicans marks a dramatic shift in Russia’s attempts to influence U.S. domestic politics. During the Cold War, the Kremlin tried to forge links to the American left. Such efforts haven’t stopped entirely. It’s no accident that Green Party presidential candidate Jill Stein scored a seat at Vladimir Putin’s table at a 2015 banquet in Moscow for the state-sponsored propaganda outlet RT, or that RT hired former MSNBC anchor Ed Schultz, who boasts a fervent liberal fan base. But over the past five years, Russia has also been fostering a growing affinity on the right. According to a February Gallup poll, nearly one-third of Republicans now say they have a favorable impression of Putin, up from 12% two years ago and far higher than Putin’s rating among Democrats.

The role reversal isn’t lost on the coterie of conservatives who have led the effort to ease tensions with Moscow. “We were some of the biggest cold warriors ever,” says Paul Erickson, a veteran Republican activist who attended the Feb. 1 dinner. “But then the Wall fell. We won. There is a huge school within the conservative movement and the Republican Party that says you can’t look at these people through the same lens of the Cold War.”

What would right-wing activists in the U.S. have in common with Putin’s Russia? More than you might expect. Conservative Christianity has been one common touchstone. The dinner at the George Hotel, hosted by conservative activist and Rockefeller scion George O’Neill Jr., was part of the festivities surrounding the National Prayer Breakfast, an annual event run by evangelicals to forge new, if informal, diplomatic ties through shared spiritual principles. Evangelicals have discovered common ground with Moscow’s nationalist and ultraconservative push–led by the Russian Orthodox Church–to make the post-Soviet nation a bulwark of Christianity amid the increasing secularization of the West.

Prominent social conservative leaders, like Franklin Graham, say they see Putin as a powerful partner in the quest to protect Christian religious minorities. In war zones like Syria, says Graham, Putin has been a stronger defender of Christians than U.S. leaders. “Islam teaches to kill Christians and Jews,” claims Graham, president of the Billy Graham Evangelistic Association. Putin “sees himself in the Middle East as defending the Christian remnant that is left in Syria.” In 2015 Graham met privately with Putin, who has supported Syrian President Bashar Assad’s regime, while visiting Moscow at the Russian Orthodox Church’s invitation. They planned a conference on persecuted Christians, which will be held in Washington in May. “He was very supportive,” says Graham. “He said he would do all he could from his office to help.”

Catholic leaders like Brian Brown have been impressed by the Russian Orthodox Church’s decision to tighten policies on abortion and uphold traditional marriage. Since 2014, Brown, president of the National Organization for Marriage, has worked closely with the church and with Russian anti-abortion and antigay marriage activists like FamilyPolicy.ru. In late January, Brown visited Moscow to seek the Duma’s support for his group’s new manifesto on those issues. These new bonds with Russia have “been a sea change, both in my own view and also, I think, for many conservatives,” Brown says. “Wherever there are folks standing up for marriage, we will meet with them.”

While some activists bonded over faith, others found shared purpose in guns. Russia has no real tradition of Second Amendment rights. But with Torshin’s help, Butina has managed to form close relationships with top NRA officials. Butina, 28, was running a furniture business in her provincial Siberian hometown just a few years ago. After moving to Moscow in 2011, she founded a gun-rights organization, the Right to Bear Arms, and began traveling back and forth to the U.S. “She’s very, very well connected with elected officials in the Soviet Union,” says Alan Gottlieb, who founded the Second Amendment Foundation, serves on the board of the American Conservative Union and has met with Butina and Torshin in Russia.

In 2015, a collection of NRA officials flew over to attend Butina’s annual gun conference. Among them was Erickson; former NRA and ACU chief David Keene; gun manufacturer and NRA first vice president Pete Brownell; and Milwaukee County sheriff David Clarke, a Trump supporter and sensation among the conservative grassroots. One of their hosts was Russian Deputy Prime Minister Dmitry Rogozin, who was sanctioned by the White House in 2014 in connection with Russia’s invasion of Ukraine. According to a disclosure filed by Clarke, Butina’s group shelled out $6,000 for the sheriff’s meals, lodging, transportation and other excursions on the trip.

NRA allies say the group is happy to work with international firearms-advocacy groups to advance mutual interests. The NRA forked over some $30 million to help elect Trump, about two and a half times the amount it shelled out on the 2012 election, despite his previous support for gun-control measures. (The group did not respond to a request to comment for this story.) “I am deeply grateful for the friendship of the American NRA,” Butina, now a graduate student in international relations at American University in Washington, wrote in an email to TIME. “My work has been focused exclusively on the expansion of gun rights–very publicly.”

But Butina’s attraction to the Republican Party runs broader than common ground on gun rights. “It may take the election of a Republican to the White House in 2016 to improve relations between the Russian Federation and the United States,” she wrote in the summer of 2015 in the National Interest, a magazine published by the Center for the National Interest. The same Washington think tank hosted a foreign policy speech for candidate Trump in April 2016, where Trump was introduced to Russian ambassador Sergey Kislyak, according to the Wall Street Journal.

In April 2015, Butina and Torshin traveled to Tennessee to attend a fundraiser for a political group backing the presidential campaign of Wisconsin Governor Scott Walker, then viewed as a leading contender for the GOP nomination. In July, she attended Walker’s campaign kickoff in Wisconsin. The same week, Butina flew to Las Vegas for one of Trump’s first campaign events. She asked Trump whether he would end the “damaging” U.S. government sanctions on Russia. “I know Putin, and I’ll tell you what, we’ll get along with Putin,” he responded. “I don’t think you’d need the sanctions.”

It wasn’t the pair’s only brush with the Trump campaign. Torshin, who according to Bloomberg News has been accused by Spanish investigators of directing a money-laundering operation for a Moscow syndicate (he has denied any wrongdoing), boasted of meeting the President’s son Donald Trump Jr. at a 2016 Louisville meeting of the NRA, where he is a lifetime member. That encounter “should have set off alarm bells,” said one former White House official. “It is a big deal.”

Last month Torshin assembled the delegation of Russians who attended the National Prayer Breakfast. The group of 16 included Kremlin advisers, university presidents and the mayor of an eastern Russia city. At the Bistro Bis dinner, the room was set in traditional Russian style, with the guests on one side of a long table and the Americans on the other. “The better to hear, the better to toast,” Butina explained.

–With reporting by MICHAEL SCHERER/WASHINGTON

Correction: The original version of this story incorrectly stated that Alexander Torshin attended an April 2016 speech by Donald Trump at the Center for the National Interest in Washington. Torshin did not attend. 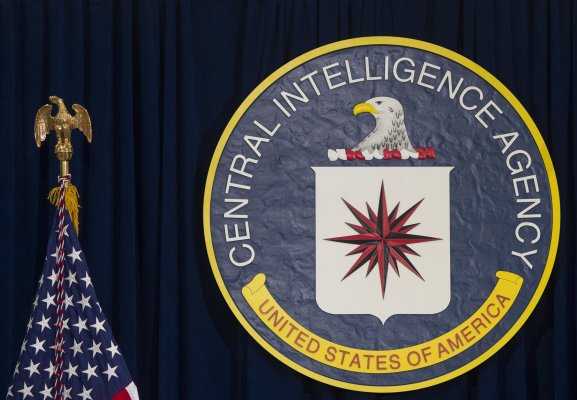