Transparent Creator Jill Soloway: Being Transgender Is Not 'Trendy'

The cast and crew of Amazon’s Transparent took a recent day off from shooting to focus on a real-life character America has been getting to know: 17-year-old Gavin Grimm.

In a short video, first revealed here by TIME, stars including Jeffrey Tambor and producer Jill Soloway tell a brief version of Grimm’s story and explain why his years-long legal battle with his school board over the right to use the boys’ restroom is bigger than one transgender kid.

The high school senior from Virginia was preparing for a historic moment later this month, when his lawsuit was set to be the first Supreme Court case involving transgender rights. But in light of actions taken by the Trump Administration, the justices this week sent the case back down to a lower court where the ruling, now vacated, had previously come down on his side.

While Grimm could still set a precedent that affects transgender students around the country, his saga now won’t be concluding until after he graduates. And so his legal team at the American Civil Liberties Union teamed up with Transparent to remind people that their fight over transgender rights goes on — and so do several similar court cases, as well as tussles in more than a dozen state legislatures over so-called “bathroom bills.”

In an interview about the video, TIME spoke to Soloway about the intersection of entertainment and LGBT rights, America’s war over restrooms and why being transgender is not “trendy.”

TIME: Why did the cast and crew take time off shooting to make this video?

Jill Soloway: Obviously on Transparent we’re always thinking about trans rights. Because of the Supreme Court case that was coming up, we really felt like it was an inflection point in the movement and we absolutely needed to come together and take a stand at this moment in our history.

What do you think the significance of Gavin’s case has been so far?

It’s been amazing to have a name and a face on the movement. Sometimes movements need these heroes, these people that we can care about. And for us to be able to see Gavin and to hear him speak as a person, where we can empathize with how it feels to be him, helps not only us–as people who are involved in the trans movement every day – but all kinds of people all over the world, to really connect with what it feels like to be trans and to have your civil rights denied.

Why do you think the entertainment industry tends to be supportive of LGBT rights?

Probably the obvious reasons. The people in the entertainment industry are mostly in New York and Los Angeles—perhaps your more liberal or progressive people. And I think a lot of people who feel other-ized are just naturally going to be more liberal and more tolerant and may be artists making attempts to undo assumptions about what it means to be a human being and challenge the status quo.

At a hearing in Texas over a bathroom bill, one person criticized the entertainment industry for “saying it’s cool to question your gender identity.” What’s your response to that?

That seems insane. I don’t think anybody is “questioning their gender identity because it’s cool.” What’s happening right now with the trans civil rights movement is that there are all kinds of people who were dealing with being other-ized because of their gender identity. I look back at growing up and having Saturday Night Live and watching that “It’s Pat” sketch be something people were laughing at collectively. Now we look at that and go, Pat was non-binary. It’s really awful when you think about the ways in which our culture has humiliated people who aren’t necessarily very clearly defined in one gender or the other.

But the truth is that non-binary people, trans people, intersex people, gender nonconforming people have been around since the beginning of time. There are now just frameworks and ways of thinking about ourselves that are being offered by the culture. These were the people in the past who were bullied. These are the people who killed themselves. These are the people who looked different, walked different, acted different but didn’t have the information for their parents, for example, to help get them the right kind of healthcare … It’s not getting cool and trendy now. It’s always been around. It’s just now there’s a way for people to find each other and have culture and have community and have safety, so these people can thrive and live.

At this point, what do you think people most need to understand about transgender people like Gavin?

Trans people are people. And they deserve the same rights as any people, and being trans isn’t about dressing up and it certainly isn’t about using a costume to gain access to a bathroom. And, by the way, I’ve been going to the bathroom for fifty years, and I’ve never seen anybody’s genitals. I just don’t understand what that fear is. I don’t really believe that anyone truly believes predators are going to use a change in law to attack people. Women’s rights are violated all over, not just in bathrooms. We’re in danger everywhere. We’re in danger in our homes. We’re in danger at family reunions. We live in this patriarchy. It’s just this strange idea.

People talk about “culture wars” like this has something to do with a party you would dress up for, or drag, or Rocky Horror… Being trans has nothing to do trends. This is not a trend. These are human beings. These are human beings who don’t identify with the gender they were assigned at birth. People think that it’s like a choice. I don’t know why. I guess they think other forms of gender expression are choices.

It can be a hard for people to wrap their heads around how complex gender can be.

But I think they will. I think that’s the headline through all of this. That things are getting better. We are moving in a more positive direction. As people start to realize how all of this is connected up with love, tolerance, dignity, caring for others—it’s human rights. 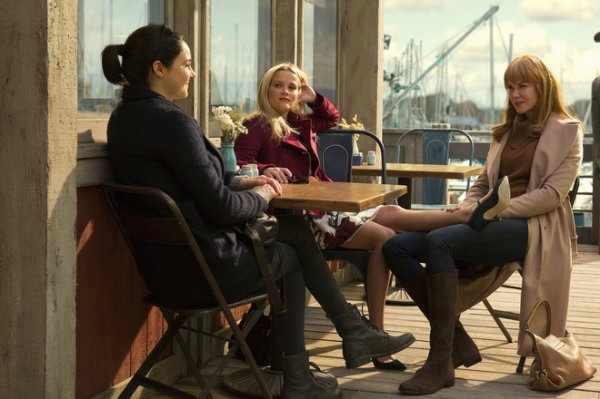 Here’s One Big Little Lies Murder Theory You Might Have Missed
Next Up: Editor's Pick