I Bullied Myself Into Breastfeeding

This article was originally published on March 19, 2015.

Brace ourselves, mamas. Scientists in Brazil have discovered more evidence to support the theory that the breastfed shall inherit the earth. Not only are breastfed babies supposedly more resistant to sickness, better bonded with their mothers, and less likely to die from SIDS, but now we are to believe they are going to grow up to be smarter and richer, too.

And I include my own infant daughter in “they.” Despite the fact that my daughter has a cleft lip and is undergoing a presurgical treatment that makes nursing impossible, I have exclusively breastfed her by pumping all of her milk. I’ve done it partly to give my baby all of the potential benefits, real, exaggerated and imagined. But, if I’m being honest, I’ve also done it under pressure and guilt.

Feeding your child should be the ultimate you-do-you. Instead, it’s become everyone-else-do-you-dot-dot-dot-or-else. For all the talk about evil formula companies plying us with propaganda, like so many ounces of corn syrup down a newborn’s unwitting hatch, I have only ever felt swayed — or rather, forcefully wrenched — by the other side. By breastfeeding proselytizers whose boobie-thumping sounds a lot like mom-shaming. Add yesterday’s headline to their gospel.

When we have a technological option — formula — but we are made to feel as though there shouldn’t be a choice, isn’t the strident case for breastfeeding just one more way of putting women in their place? Selfless slaves to the furthering of the human race rather than members of it? It’s not a nanny state; it’s a mommy state.

Sure, I sound a little purple, but so does all of the breastfeeding hype. If you properly mix your formula with clean water, your baby is just as likely to kick ass on the SATs, and probably inherit some of the earth him or herself, like my boss, my boss’s boss, and my boss’s boss’s boss, who were all formula-fed and none the shabbier for it. To think that a woman is seduced into a feeding decision by the Willy Wonkas at Nestle or Mead Johnson gives none of us enough credit, or power.

I have had resources that many women do not: a supportive husband and family, an unusually generous paid maternity leave, guilt- and stress-free time and space to pump at work, and the intellectual background to fully understand all of my options, never mind research the hell out of them. Those things have allowed me to make the “natural” choice.

Recently, formula tempted me. My daughter is a string bean — healthy and long but lean — and I thought I would drop a couple ounces into her diet in the hopes it would help chunk her up. (One feeding fable is that formula-fed babies are bigger; breastfeeding, by the way, does not prevent obesity!) I also fantasized about giving up pumping — more time to play with the baby in the morning, a long night’s painless sleep, the ugliest of the yellow machines returned to its native hospital. Then, yesterday, I reversed course. It seemed crazy to give my daughter anything other than breast milk when I had stayed in the game for three long months, never mind she had caught a cold and suffered diaper rash — maladies breastfed babies are supposedly more likely to avoid. If I want her to be richer and smarter, I’ve gotta stick with it for nine more months. “So far as I can tell, people need to believe that breastfeeding is better precisely because it’s harder,” Amy Sullivan wrote. I may be one of those people, an overachiever who needs to be “mom enough” by Searsian standards.

So there I sit with my pump, the Jack to my Ennis, muttering, “I wish I knew how to quit you.” (Shout out here to my fellow EP’ers [Exclusive Pumpers, for the uninitiated], the overlooked underclass of breastfeeding moms who “do it with a bottle,” as I would like our spring break t-shirts to read.) I smugly tell my mom friends about my ability to feed the baby her daily intake while continuously growing my freezer stash, where I’ve obsessively, almost perversely, stockpiled slender bags of frozen milk so my baby can survive my return to work. The bottles of thick, hearty Similac lie in a plastic bin under her crib, shamefully out of sight but never out of mind. I tell myself I am able to feed her from my own body, and that I should be proud of this. What would people think if I had never even tried to go this route?

As Laura Kipnis writes in the excellent forthcoming book Selfish, Shallow and Self-Absorbed: Sixteen Writers on the Decision Not to Have Kids, “What’s with all the sentimentality about nature anyway, and the kowtowing to it, as though adhering to the ‘natural’ had some sort of ethical force… Sure, we like nature when it’s a beautiful day on the beach; less so when a tidal wave kills your family or a shark bites off your arm.” She goes on to say that technology has liberated women more than suffrage. Kipnis is specifically mulling labor and childbirth, but let’s throw formula in with C-sections as medical alternatives to whatever biology intended for those of us who are biologically incompetent. And I suppose I mean alternatives to death; if we didn’t have formula and C-sections, that’s one “choice” biology would give us. (C-sections — I had one — are a mom-shame topic for another day.)

A wise fellow mother recently told me that she refused to ever utter a self-deprecatory “I’m a bad mom.” “You know, ‘I forgot to do tummy time today — I’m a bad mom.’” “Bad moms” don’t mean it, of course. It’s just casual self-flagellation, the result of being conditioned to think that if we don’t do every last self-sacrificial thing we possibly can, even at the cost of comfort or happiness, or, God forbid, pure convenience, then we aren’t doing it right. It’s the same womp-womp tone in which I talk about introducing formula into my daughter’s diet. But you know what? To hell with that.

I hope my confessional encourages myself and other moms to feel good about whatever they need — or want — to do for their babies and themselves. And that’s because I’m a good mom. 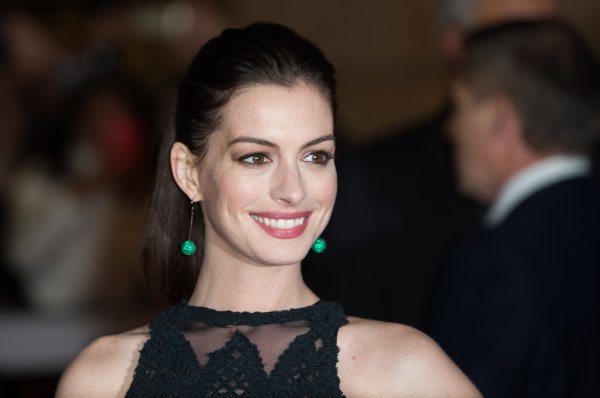 Anne Hathaway on Why She Became a U.N. Ambassador for Paid Parental Leave
Next Up: Editor's Pick