Gabourey Sidibe Opens Up About Her Weight-Loss Surgery

Last year, the Empire star underwent weight-loss surgery, and she’s opening up about the experience — and her battle with depression, anxiety and bulimia — for the first time in her new memoir, This Is Just My Face: Try Not to Stare, excerpted exclusively in the latest issue of PEOPLE.

“I just didn’t want to worry,” Sidibe, 33, tells PEOPLE of her decision to get laparoscopic bariatric surgery after she and her older brother Ahmed, 34, were diagnosed with Type 2 diabetes. “I truly didn’t want to worry about all the effects that go along with diabetes. I genuinely [would] worry all the time about losing my toes.”

The star — who rose to fame playing the titular role in Precious in 2009 — tried for more than a decade to lose weight naturally before opting for the procedure. And in May of 2016, she secretly went under the knife.

“My surgeon said they’d cut my stomach in half. This would limit my hunger and capacity to eat. My brain chemistry would change and I’d want to eat healthier. I’ll take it! My lifelong relationship with food had to change,” she writes in her wise, witty and unapologetic memoir, out in May.

“The surgery wasn’t the easy way out,” she says. “I wasn’t cheating by getting it done. I wouldn’t have been able to lose as much as I’ve lost without it.”

Since the procedure, Sidibe has changed her eating habits — working with a nutritionist — and upped her fitness regimen, working out with a trainer, swimming and riding a tricycle around the Empire set.

The star’s decision to undergo surgery wasn’t one she took lightly. Since she was 6 years old, the New York City native has struggled with her appearance. And after her parents — a subway singer (mom Alice) and taxi driver (dad, Ibnou) — split, she battled depression, anxiety and bulimia, which she eventually overcame through therapy.

“It has taken me years to realize that what I was born with is all beautiful,” she writes in her book. “I did not get this surgery to be beautiful. I did it so I can walk around comfortably in heels. I want to do a cartwheel. I want not to be in pain every time I walk up a flight of stairs.”

Ten months after her procedure, Sidibe continues to lose weight.

“I have a goal right now, and I’m almost there,” she says. “And then once I’ve got it, I’ll set another. But my starting weight and my goal weight, they’re personal. If too many people are involved, I’ll shut down.”

Even before she decided to get the surgery, Sidibe had some hesitations.

“I know I’m beautiful in my current face and my current body. What I don’t know about is the next body,” she writes her in This Is Just My Face. “I admit it, I hope to God I don’t get skinny. If I could lose enough to just be a little chubby, I’ll be over the moon! Will I still be beautiful then? S—. Probably. My beauty doesn’t come from a mirror. It never will.”

Indeed, the American Horror Story alum has come to appreciate her appearance, no matter her dress size.

“There’s nothing ugly about me. Anyone trying to convince me that I am — and it’s usually me — is wasting her time,” she says. “I was in a war with my body for a long time. If I’d started treating it better sooner, I wouldn’t have spent so many years hating myself. But I love my body now. 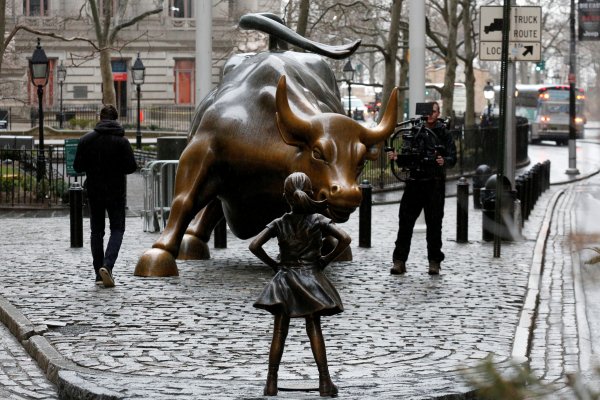 Why the Defiant Girl Statue in Front of the Wall Street Bull Is So Significant
Next Up: Editor's Pick