The four main organizers of the Women’s March were among the protesters arrested during a New York City rally on International Women’s Day.

Tamika Mallory, Linda Sarsour, Carmen Perez and Bob Bland were arrested early Wednesday afternoon after a day of loud but orderly protests for “A Day Without a Woman,” a strike the group organized to mark IWD. The organizers, as well as several other protesters, had been sitting in the street near the Trump Hotel at Columbus Circle, disrupting traffic. A representative for the four activists confirmed the arrests.

Mallory, Sarsour, Perez and Bland were all released Wednesday evening, along with the other arrested protesters.

The 13 women were kept two to a cell. They sang “We Shall Overcome” and “This Little Light of Mine” and gospel songs up and down the corridors of the NYPD’s 7th precinct in downtown Manhattan. “We checked on each other,” said Mallory, the first of the 13 to be released.

“The goal is to show young girls and women that their voice is their power,” said Perez after her release. “The fact that we’re able to inspire so many other women out here in the world is truly an honor.”

Yet to be released by 8 p.m. on Wednesday was Sophie Ellman-Golan, a 24-year-old activist whose mother Rabbi Barat Ellman was arrested about three weeks ago for protesting the Trump’s travel ban. “I’m incredibly proud of her,” said Ellman as she waited outside the precinct for her daughter to be released. “For a long time she’s been a woman who puts her feet where her mouth is.”

At least a thousand women gathered at Fifth Avenue and 59th Street earlier on Wednesday to protest what they consider the unfair treatment of women. Outside of rallies, those participating in “Day Without a Woman” were asked to stay home from work, wear red, and avoid spending money.

“I’ve always celebrated International Women’s Day, but this is the first time I’ve actually come out to march,” said Liz Walsh, 41, who stayed home from her job at Human Rights Watch to participate in the strike. Her friend Heather Hardin, 38, an interior designer, also skipped work today.

“There hasn’t been a true opportunity to make a difference like this,” Hardin said. “This is our civil rights movement.”

The New York City rallies were one of many taking place across the nation and the world.

In San Francisco, hundreds of women dressed in red swarmed City Hall, holding signs that said “Love Will Win” and “Here’s to Strong Women” and “Hear Us Roar!” and “We Are Greater Than Fear.” Some signs had affirming messages for immigrants written in several languages (“No matter where you are from, we’re glad you’re our neighbor”), and two women held a giant black-and-white banner that simply said: “Resist.” The crowd erupted when Christine Pelosi, the daughter of House minority leader Nancy Pelosi, said her mother had just led a walkout of women in Congress.

Speakers at the rally touched on the broad range of issues that drew women to streets. Shannon Coulter, co-founder of the #GrabYourWallet boycott encouraging shoppers not to spend their money at retailers who do business with the Trump family, noted that women are responsible for 70% or more of consumer purchasing decisions in the country. “You may not feel powerful,” Coulter said. “But you are powerful.”

Others spoke about the fight over access to reproductive healthcare, equal pay, violence against women, education for their daughters and the deportation of women immigrants. And while some attendees said the Trump Administration had little to do with their decision to protest, far more seemed moved by a sense of direct response.

“I find this Administration appalling on literally every level,” said YouTube employee Katie Bush, who attended with other Google employees. “Just the inequality and bigotry and sexism and misogyny and Islamophobia and homophobia …” Many colleagues who couldn’t take the day off, she said, still shut down their emails with an out-of-office message to support those who did.

Two women, carrying a sign that said “Remember Our Struggle” for the suffragettes, came dressed as Statues of Liberty — draped in chains. “We feel our liberties are being threatened by the current administration,” said Barbara Skinner, who works at a nonprofit and a rental company. Her sister in chains, Pamela Crawford, agreed, saying she showed up to be seen and counted.

“It’ll give other women more courage, to get involved, write their Congressman, write their Senators,” Crawford said. “Every person can make a difference.” 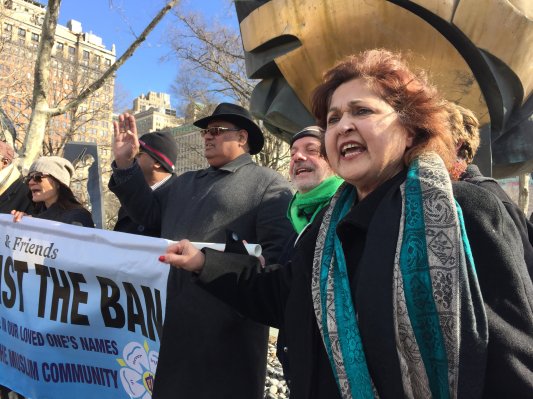 Families of 9/11 Victims Denounce Immigration Ban
Next Up: Editor's Pick